The airline has missed several payments to creditors, and South Africa’s deputy finance spokesperson last year said that “essentially they are insolvent and should have filed for liquidation.” Ouch.

So the airline has been looking for investors, but not surprisingly there hasn’t been much interest. In 2017 the airline lost 473 million USD, which is a loss that’s three times bigger than what they had in the previous year.

The airline has now revealed their plan to break even within three years. We’ll have to wait and see if they’re successful, though it’s more of a strategy than they’ve had in years. The airline is hoping to shrink their way into profitability. Per Bloomberg, here’s what SAA’s CEO had to say:

“We now have a clear strategy and clear path to profitability defined by the board,” said Jarana, who became SAA’s first permanent CEO in three years when he started work in November. “We are looking at a three-year window to get to a break-even point. We continue to revise the strategy as we see more opportunities.”

What does this turnaround plan look like? It consists of two main concepts.

First of all, the airline plans to reduce the number of money-losing routes they operate. They haven’t provided specific examples of what this will look like going forward, though they note that last month they halved frequencies to Heathrow, and in 2017 they reduced flights to some African capitals.

The other part of their plan is that South African Airways intends to transfer some of their unneeded planes to Mango Airlines, which is their low cost subsidiary that makes money.

While SAA was previously relying on new investors, SAA’s new CEO says that he is putting that on hold until they’re in a better financial situation. Instead they’re talking to the National Treasury in hopes of getting further funding from them, now that they have a clear plan:

A fund-raising plan laid out by Jarana last year to sell a stake to an equity partner will have to be shelved until the balance sheet has been repaired, the CEO said. A new investor would “most likely be attracted to an SAA that’s actually dealt with its own challenges and restructured,” he said in a phone interview Monday.

“We are busy talking to the National Treasury about how to fund the new plan,” Jarana said. “We are quite clear that the new plan is solid and we are very aggressive about implementing it.”

Only time will tell if South African Airways succeeds with their new strategy. 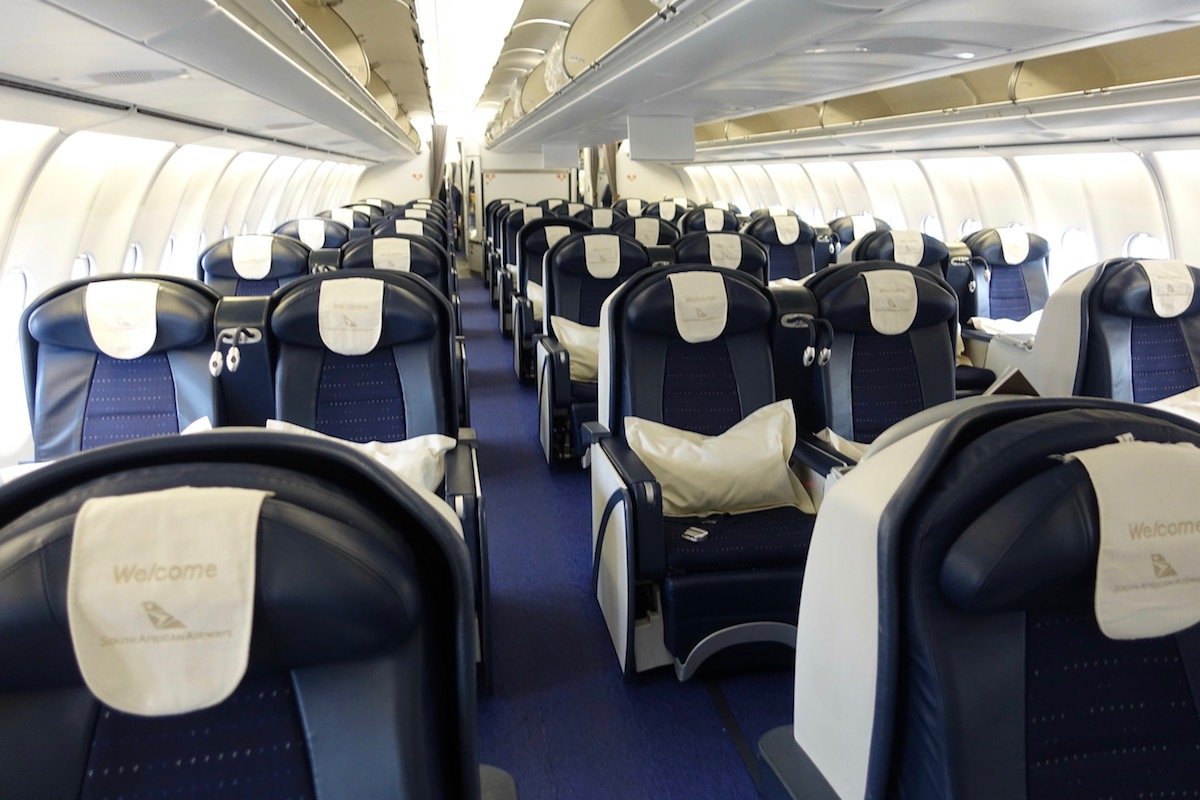 It sounds to me like SAA has a clearer strategy than they’ve otherwise had in the past decade, not that this is saying a whole lot. At least based on the quotes, I’m impressed by SAA’s new CEO, so here’s to hoping he can actually make the airline more sustainable. It’s sad when an airline has to make the tough decision of shrinking their way out of losses, though it seems like the only option the airline has.

I am an ex SAA manager and left voluntarily years ago, before the rot started.(Coleman era) SAA had a window of opportunity to become one of the worlds top airlines, post 1994. There are however a number reasons for the airlines present state: 1) Do a calculation on Flight Crew (pilots) vs Cabin Crew on SAA (The ratio is 1 to 3!) The wages of SAA pilots is the equivalent of 35% to 40% of the total airline wage budget. Is this in line with profitable airlines? 2) The airline management structure is top heavy, many are appointed due to political connections, and there is no accountability. 3) The schedule / Flight routes are not based on the normal ROI principles. 4) Purchasing is open to corruption. 5) The variety of aircraft operated by SAA reduces synergy of operations and results in a 'wastage' of labor. Pilots only operate one aircraft type and this impacts on schedule flexibility. With the lease of every new aircraft type there is a related impact re. training of pilots and maintenance/ support crew. 6) Sad as it is, but SAA should have closed it s doors years ago if it was not for the Taxpayer. I can not vouch for this, but I was told that if you divide the Annual loss by the number of passengers flown the loss or rather "Subsidy " per passenger comes to over $200 per passenger! It would therefore be better for the Taxpayer if the airline shuts down. 7) It also did not help that the previous chair-lady was a close friend of Mr. Zuma!

Ben you constantly talk about airlines that are going out of business or in trouble. (thanks for keeping us informed). Do you have any knowledge about the maintenance programs of the troubled airlines? for example, many of the African airlines have a well deserved, terrible maintenance and crash record What about all the other airlines that get into financial trouble. Is maintenance the first to go and does that affect reliability?

Good. Maybe QR could take them over, C'mon Al, take over mate. Flick most of those lazy-arse South African flight attendants and deliver the airline into profit with good service, good fares and hot young flight attendants. And some planes that look like they are from the 21st century. My god, those flight attendants are lazy-arses and most of them have gigantic arses too. They would not be leading me to safety in the event of an incident, more like roll, roll, roll yourself gently down the aisle. They would crush you to death with their substantial obesity before saving you. Good riddance. The airline is crap and I blame the lazy-arses on-board and the corruption rife throughout the management.