In general we’re seeing a big push globally towards more environmentally friendly policies, and I’d say that in the US we’re seeing a lot of progress on that front at the moment. It’s an area where the US has long lagged (especially compared to many European countries), though the US is starting to catch up, at least on the state and city level.

There’s now an interesting new airport policy along those lines.

San Francisco Airport is banning the sale of single-use plastic water bottles as of August 20, 2019. This is the first time we’ve seen a US airport implement a policy like this. This will apply to restaurants, cafes, and vending machines, and the only exclusion will be flavored water, which can continue to be sold in plastic bottles.

That means those passengers wishing to get a bottle of water will either have to bring their own refillable bottle, or buy a refillable aluminum or glass bottle at the airport.

This development is part of a broader plan to cut SFO carbon emissions and energy use to zero by 2021.

This latest move is actually not entirely the airport’s choosing, though. A 2014 ordinance banned the sale of plastic water bottles on all city-owned property, and the airport is obviously part of that, though it’s just now being implemented at the airport.

As of now lots of SFO establishments are still selling plastic water bottles, while others have switched to glass bottles and plastic-free reusable bottles.

The challenge of staying hydrated at airports

It goes without saying that bottled water is incredibly wasteful. But airports are also tricky places in this regard, since you can’t bring your own water. The war on airport liquids has now been expanded in a totally different way.

This actually got me thinking about my own situation. At home I don’t use bottled water, and I just drink filtered water. I also have a reusable bottle, and I take that wherever I go when not traveling.

However, I don’t actually take it with me when I travel. I probably should now that I think about it, but I feel like there are a few reasons I don’t:

Obviously SFO’s policy change is a push towards encouraging people to bring their own bottles. But otherwise I have some questions:

I say all this as someone who is totally anti-plastic, but I do think it’s worth acknowledging the challenges this presents.

If they really wanted to do what’s best for the environment and for passengers, maybe the airport directly should sell reusable bottles pretty close to cost, which would allow people to stay hydrated at a reasonable cost while caring about the environment.

But I’m sure that would also violate the agreements they have with their vendors, many of which make a fortune selling a basic human necessity to passengers. So they want to help the environment, but they also don’t want to give up any revenue.

I’m curious how you guys feel about this — what do you make of SFO’s policy change, and do you travel with a reusable water bottle?

Why not just encourage people to recycle the plastic bottle, then everyone wins. Why go to such extremes? I'm an American living in Europe and they recycle almost everything.

"Why can establishments sell soda in plastic bottles, but not water? In many cases this will make soda cheaper than water, and may push people towards making less healthy purchases" I completely agree with you for is the Plastic we find in Dolphin or Whale's stomack only from Water plastic bottles and not from Soda plastic bottles too ? Ban all plastic ,that's all .

@Seattle Eric SFO is run by the City and County of San Francisco even though it's physically in San Mateo County. The SFPD patrols the airport. So, the airport is subjected to whims of the SFBOS. Also, boxed water will be banned because there is a layer of plastic on the inside of the cardboard. 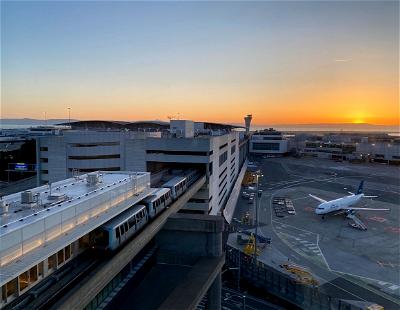