A video has gone viral the last few days from a Lufthansa narrow body flight.

Although faces are obscured to protect their privacy, it show a passenger in the aisle seat filming the two seats next to them (i.e. to the window). 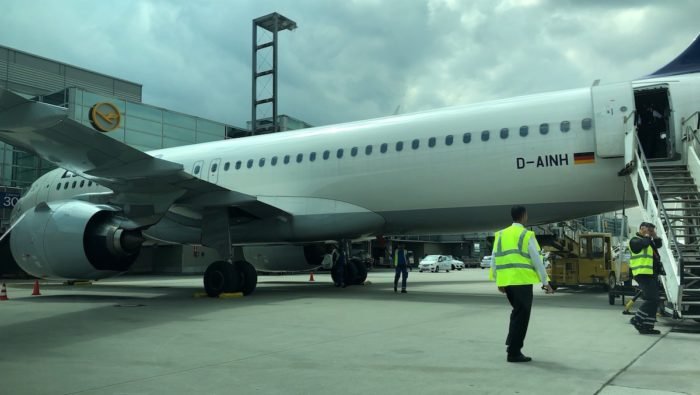 A small child has been drawing on the back of the middle seat in front of them, and has then moved to sit on the lap of the adult sitting in the window seat, which is presumably the child’s parent or guardian.

The child continues drawing on the back of the seat in front with some sort of crayon or marker — the window seat in this case.

What makes this video crazy is that the adult whose lap the child is sitting on not only fails to stop the child from vandalising the seat in front, but actually guides their hand to help them continue doing so.

I have no issue with a child wanting to draw on every surface they can access — they don’t know any better. What I struggle to comprehend is the adult actually helping them to do so.

Would you say something?

I don’t know all of the situation, but I would like to think if I was in that situation I would suggest to the parent that they both stop vandalising the aircraft, and if they wanted something to draw on they should ask the crew for some scrap paper.

If they told me to mind my own business I would probably subtly alert the crew to what was happening, and if there was a spare seat on the aircraft would ask to be reseated while the crew dealt with the situation.

I doubt they would be very pleased to see what had happened.

What do you make of this situation? Would you have said anything?

@bluepanda I believe that almost every able-bodied parent would have force to restrain a child's arms and hold a pacifier in mouth. That is the minimum standard of treating a child that is acceptable in public. No excuses for letting a child cause public disturbances or commit a criminal activity such as vandalism.

We’re all too quick to judge these days. If the parent or guardian didn’t “go with the flow”, perhaps we would all be viewing and judging a screaming kid video instead?

@ James, Thank you for deleting the offensive comment. It may be as well if you now delete my previous comment and also this comment, which, following your welcome action, are irrelevant.