This post has nothing to do with points or travel, so by all means stop reading if that’s what you’re looking for. However, it has to do with life in general, and if there’s one thing I’ve increasingly learned over time, it’s the importance of balancing obsessive travel while trying to live a “normal” life. And what happened this past week definitely puts that into perspective.

I consider you guys to be like my family (after all I spend more time on this site than with anyone/anything else, so….), and wanted to share a bit about the past week. This might also explain the lack of content this week, and for those who have been saying “old news, other sites wrote about this yesterday,” hopefully this explains why.

Two Sundays ago (Cinco de Mayo) Ford and I were at the dog park with Winston and I remember saying to Ford “boy, life is good and has really slowed down lately. It won’t always be that way, but I’m grateful it is right now.”

The past year otherwise has been crazy (not in a bad way, but just so busy that it was overwhelming). Having a weekend at home where we had nothing to do was a foreign concept to us, and we appreciated it.

Given the quiet weekend we had, our plan for the following week was to see both of our moms for Mother’s Day. I spent a couple of days last week in Savannah, and during that time Ford’s mom visited him in Miami. I was going to see her briefly, and then the plan was for both of us to go to Tampa to surprise my mom over the weekend. We thought that surprise would put a big smile on her face.

We ended up seeing her, but not under the conditions we had hoped…

A call from my mom…

My mom called me on May 5 (just hours after Ford and I were talking about how calm life was), and said she wasn’t feeling well, so she went to the doctor. It looked like she had a hernia, so they were going to do some more tests. She was fine for a bit, but it didn’t seem like that big of a deal.

But Thursday the pain got so bad that she decided to go to the ER, and at that point she was given news that no one wants to get. I was in Savannah for some meetings, and naturally hopped on a plane down to see her.

She was in the hospital from Thursday through Tuesday, and got a countless number of tests done. Seeing the strength with which she handled everything was inspiring. There were moments where I thought I was going to collapse or have a heart attack, so I can’t even imagine how she must have been feeling.

Then on Sunday she got a pretty serious cancer diagnosis… not exactly the Mother’s Day anyone would hope to have. The good news is that she has a chance of fighting it. While five days in the hospital isn’t fun, that’s not that long when you consider that she went from thinking she had nothing major, to starting chemo.

Oddly all of this was a bit of a relief compared to how we were feeling on Friday and Saturday, before we got some definitive test results, and didn’t know if the cancer had spread so far that it wasn’t even worth fighting.

Seeing her strength and positive attitude throughout all of this has been amazing. The worst day mentally was probably Saturday, when we were waiting on results to tell us if she even had a chance of fighting it.

We decided to bring Winston to the little park at the hospital that day, and that made her smile. 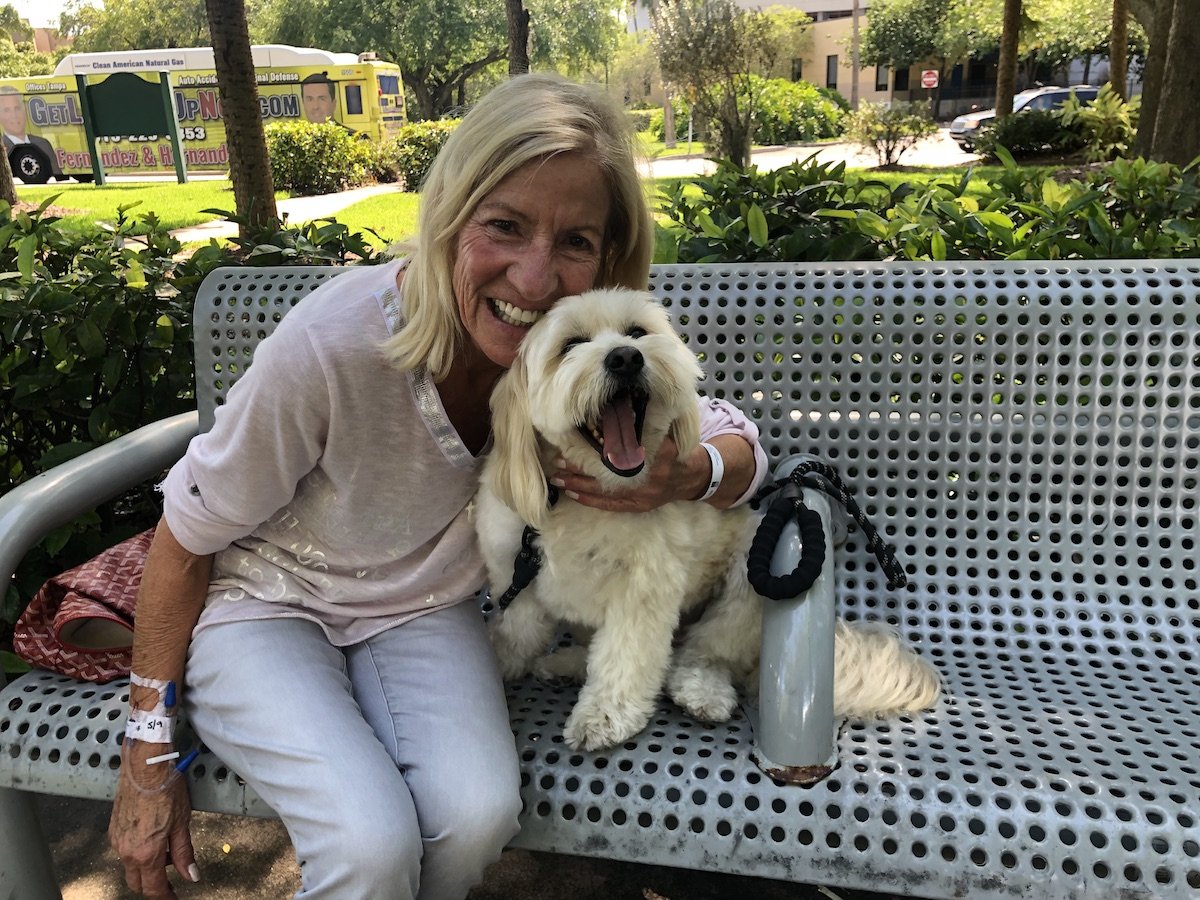 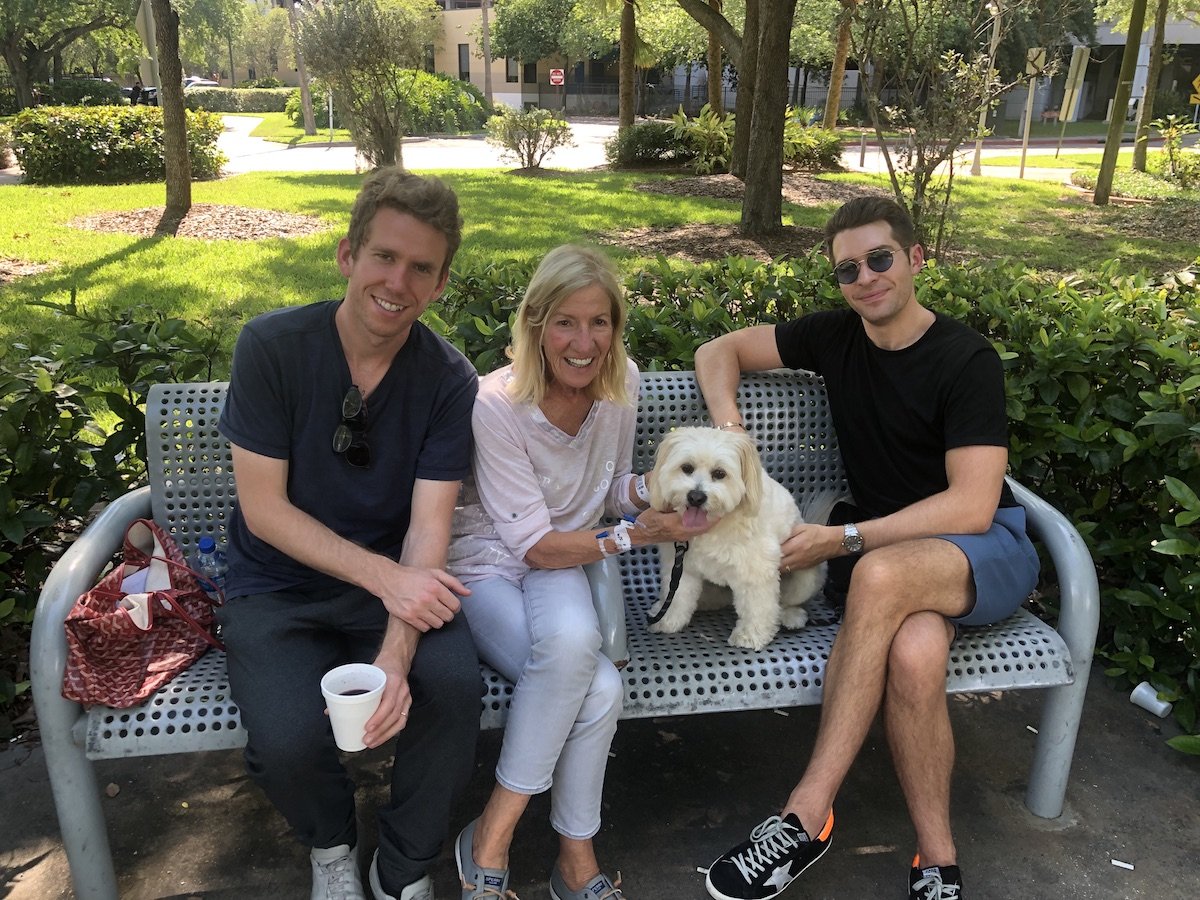 On Monday she got taken away for four different procedures, before eventually starting chemo at 11PM, and I can’t even describe how well she handled it.

This is of course only the start of a long journey.

What’s my point in all of this?

On the most basic level I’m writing about this partly because it’s sort of therapeutic to do so, and partly to ask you guys to keep her in your thoughts.

But beyond that I feel like there are some bigger life lessons that are either reinforced with this, or that I’m just now learning.

Show your loved ones you love them

This is something that I’ve felt for a long time, but in situations like this I still think to myself “have I done enough?” There are many things I’ll admit I suck at, but I’d like to think I’m a pretty decent son to both of my parents. I love them dearly for all they’ve done for me throughout my life, and the least I can do is spend the rest of my life trying to repay them for that.

But even so, I felt guilty and like I didn’t do enough. Maybe that’s natural no matter what, but this whole experience has taught me that you can always do more, and that’s something I plan to do. Pick up the phone and tell your mom and/or dad you love them. Make an effort to do something special for them. Use those miles & points to plan something really cool for them.

This is a trend in general that I’ve been embracing, as I separately wrote about how I’m over my “travel addiction.” My feelings on that still ring true, but I think it can’t be emphasized enough. Take care of yourself and your loved ones, because good health is the most important thing you can have.

Not just that, but be grateful for good health. Waking up every day and feeling well is such a blessing you can’t take for granted.

Life is cruel, so be kind

No one’s life is perfect, but I’m guessing if you’re reading this blog you have a lot to be thankful for (it means you have access to a computer, and therefore probably have access to clean water, etc.).

While there’s so much joy in life, there’s also so much sorrow. Everyone has probably either already dealt with horrible sadness in their life, or will at some point. I have to admit that I’m not really religious, but sometimes I can’t help but wonder why any higher power or creator or spontaneously created universe would let science act in this way.

But my takeaway from this is that I’m going to try to be a more compassionate person across the board. You don’t know what someone is going through at any given point, and it can be easy to lose sight of that, especially when we’re not going through similar things.

A little bit of compassion goes a long way.

This is the thing I’m having to adjust to most, and I’m trying to figure out the right balance. All I want to really do at this point is take care of my mom. I don’t really want to think about anything else. But that also isn’t realistic, and finding that right balance is tough.

I’m lucky that I love my “job,” and in many ways this is a good distraction for me. Today was the first day that I spent almost the entire day “working” since this all started, and frankly it feels mentally freeing to be able to do so for a minute.

I’d love to hear any thoughts you guys have on the best way to find that balance, since I know there are people who have dealt with similar situations, if not much worse.

If you’re lucky enough to still have your parents in your life in a positive way, please give them an extra call to tell them you love them, and do something special for them. You can always earn more miles & points, but you can’t buy time for making more memories with those who matter most to you…

Share
Tweet
Conversations (224)
The comments on this page have not been provided, reviewed, approved or otherwise endorsed by any advertiser, and it is not an advertiser's responsibility to ensure posts and/or questions are answered.
Write a comment
Cancel reply
Report a Comment
Thanks for letting us know!

Submitting...
Featured Comments
View all comments (224)
Write a comment
Most helpful comments ( as chosen by the OMAAT community ).

@Lucky - I had read this post back in May and had not given much thought to it. Then recently, I read your post about the race. Just 2 days ago my mom was diagnosed with stage 3 ovarian cancer. Unlike you however, I am not with her as she is in a different country 8k miles away. The last 2 days have been a roller coaster of emotions - shock, sadness, worry. But with all the advances in medicine, I am hoping that she is able to fight back and live a few more years. I will be visiting her shortly - I just wanted to write in and offer support (as a fellow child whose mother has been diagnosed with cancer). Hang in there.

Wishing you and your mom all the best. Good energies from your reader from Brazil!

I know the feeling, I wish your mother and you the best. Stay strong and positive. My mom lost our fight the last new year after one year of fight. I live in Oslo and she lived in Peru, I think that was the hardest part of this. Stay so long doesn't let me visited her as often as I wanted, but thanks to the technology we could talk and see each other by camera. She never sow me sad or cry, but I promise you I did, many times. Now she rest in peace, and I learn so much with this, you can not imagine. As you say, life is cruel, be kind, life is short enjoy it, show the love the ones you love. Good luck in this journey and see this like an apportunity to learn more about people and life. 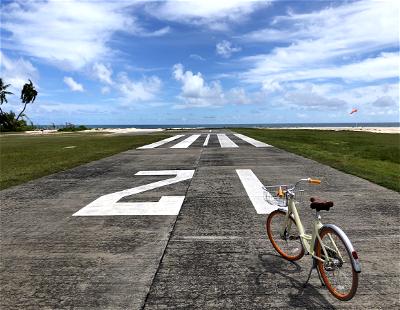 30
Three (strange) hotel habits of mine