Norwegian is one of the fastest growing transatlantic airlines, as they operate both 737 and 787 aircraft to a growing number of US destinations. This morning the airline put out a press release revealing their “biggest ever year of growth in 2018.”

Partly the press release just rehashes previous announcements, like that they’re adding flights to Austin, Chicago, and Buenos Aires, though there are two announcements that are new, as far as I know. One is good news, and one sounds like it may be bad news.

Norwegian is adding more Premium Cabin seats to their 787s

Norwegian has an interesting premium cabin product on their 787s. It’s called “Premium Cabin,” and featured 32-35 spacious seats in a 2-3-2 configuration. SeatGuru claims these seats have 46″ of pitch, while Norwegian claims these seats have 55″ of pitch (9″ is a big disparity). Daniel has reviewed this product in the past, and I’d like to try it soon as well, as it seems to be an exceptional value.

Starting in 2018, Norwegian will introduce 60% more Premium Cabin seats on their 787s. They’ll go from having 32-35 seats, to having 56 Premium Cabin seats. The new cabin will be fitted on Norwegian’s final 20 787 orders set for delivery from 2018 onwards. Norwegian is planning on taking delivery of 11 787s in 2018, so you can expect all those 787s to join the fleet in the next couple of years.

When I first quickly read through the press release I assumed there had to be a catch. For an ultra low cost carrier, this seems like a mighty big premium cabin, especially given how spacious Norwegian’s Premium Cabin seats are. Reading further into the press release:

The new 56 seat cabin configuration will offer passengers more than a metre of legroom and 11” Panasonic monitors providing hours of complimentary inflight entertainment.

Now there’s a difference between “legroom” (by my definition, literally how much space there is for your legs) and “pitch” (the amount of space each seat takes up, measured from one point on one seat to the same point on the seat behind it). A meter is roughly 39″, and that’s more legroom than I think the current seats have. However, I suspect that’s not what Norwegian is referring to.

So while Norwegian doesn’t explicitly state it, I’d be willing to bet good money that their new Premium Cabin will feature significantly less legroom, as they’re going from 1.4 meters to “more than a meter.” That’s not really surprising, given that most airlines in premium economy have significantly less legroom, and Norwegian isn’t really able to get away with charging a premium. 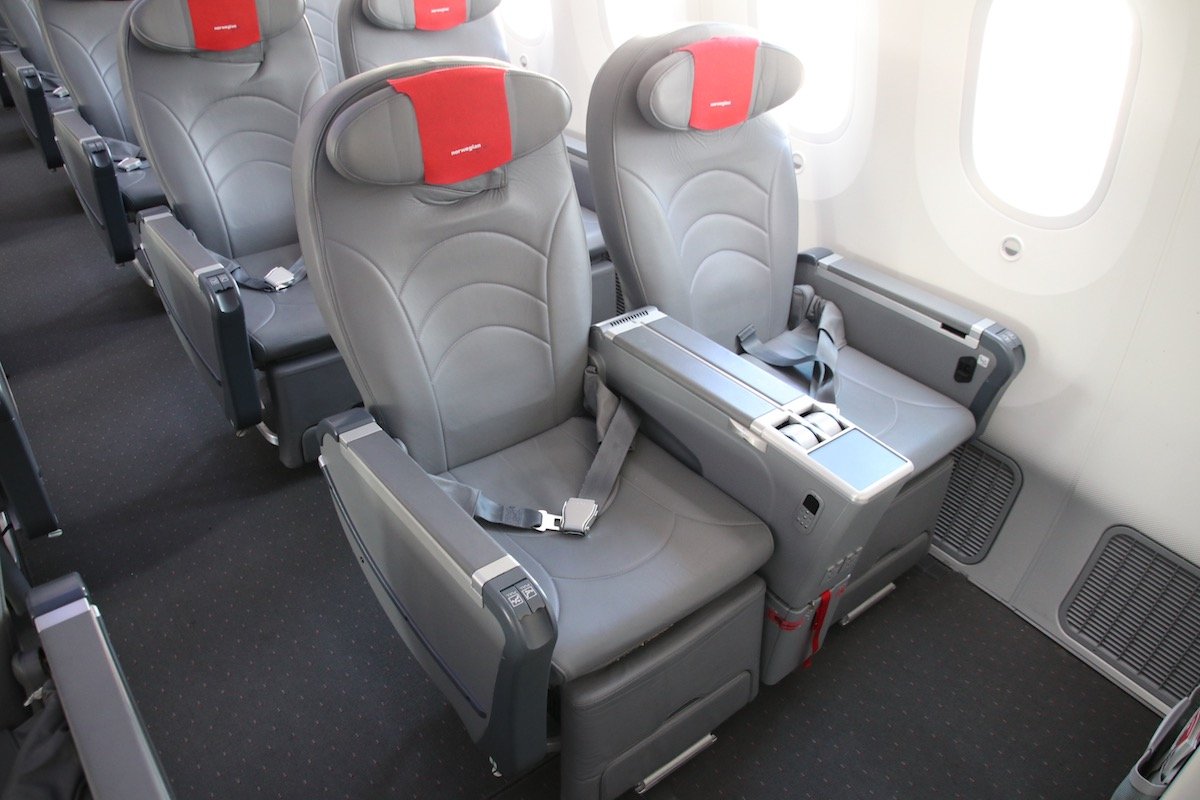 Heck, their current Premium Cabin seems like one of the best bargains in travel. For example, a one-way fare from London to Los Angeles in Premium Cabin is $679, and that includes the $200 premium departure tax out of the UK.

Norwegian will add Wi-Fi on their 787s

As it stands, Norwegian has Wi-Fi on some of their 737s, but not on any of their 787s. That will change. Norwegian will roll out Wi-Fi on longhaul flights starting “later in 2018.” While we don’t have more details yet, it’s great to see that this is something they’re planning on in general.

It has been interesting to see Norwegian’s growth the past few years, and how other airlines have had to adapt to compete with them. While Norwegian has been growing at a fast pace, their financial performance hasn’t been great, so I suspect we’ll continue to see changes from them. I’m happy to see them add Wi-Fi to their 787s, though it will likely be several years before their entire longhaul fleet features Wi-Fi.

More interesting to me is that they’re adding more Premium Cabin seats to their 787s. While it’s not explicitly stated, reading between the lines it sure seems to me like it will be a less impressive product than they currently have. While I’m sad to see that change, I guess it was inevitable.

These guys and others are why BA and other legacies are cutting costs and service to lower fares for We UK travellers. Brand new planes, menu pricing, optional premium economy that shames Club Europe. Most passengers are paying their own way in Y, not mileage jockeying premium cabin pax. If the basic fare is way cheaper than legacies like BA, and the connections/airports are convenient, it’s a no-brainer. I did an LGW-Oslo rotation with Norwegian. We boarded/exited both ends via air bridges, plane was brand new (738 with then-new Boeing Sky interior), food and beverage service was reasonably priced and everyone was served, we departed and arrived on time. No cabin bag charge. Mine hosts (business group) said their travel agent had saved thousands vs BA, the only compromise being LGW instead of LHR. At BHX, we no longer have daily AA or UA (25 year old 757s) rotations to New York. Would be good if Norwegian would fill the gap with its Y and premium economy product though I hear a new LCC is going to give the route a go.

41" of pitch is still a lot better than what BA, AF, Lufthansa and any of the US airlines offer. I've flown Norwegian premium economy on a RT from OAK to ARN with premium being only half full on both flights. The discrepancy between the cheapest economy fare and the lowest premium economy fare is enough for a lot of people not to consider premium economy, especially since there is no upgrade system and the economy fares are so low. That being said, other than not handing out eyeshades or an amenity kit (which next time I'd definitely bring shades, as the monitors were not dimmed during the flight) , I was quite happy with both of my flights. The planes were fresh and new and the FA's friendly. Food was decent as well.

This certainly doesn't sound like an upgraded cabin to me. Sounds like what it is -- adding seats; decreasing legroom. I usually fly Business or First but am curious enough about Norwegian to give them a try from JFK to Gatwick. I am going in with very low expectations. One thing I have done since booking the flight is check arrivals and departures daily. It seems to leave on time, if not early, most of the time. We'll see...