For all the talk we hear in the United States and Europe of airline industry labor shortages, here’s a contrast to that…

Qatar Airways is currently running a global recruitment drive, described by the airline as “the biggest talent acquisition in the history of the airline industry.” In particular, Qatar Airways is hiring a “significant number of new employees from India to support its global operations,” for a variety of roles. These roles are with Qatar Airways, Qatar Duty Free, Qatar Aviation Services, and more.

This comes not only as we see a big increase in demand for global travel, but also ahead of Qatar hosting the 2022 FIFA World Cup. As part of this plan, the airline has an open recruitment event at the Hilton Mumbai September 29-30, 2022.

So, how did the first day of that event go today? Well, there was so much interest that I think the whole thing can just be described as chaos. The lines were so long that you’d think people were lining up for the greatest Black Friday sale ever. People had to be sent away, and obviously that left a lot of people frustrated, since people traveled from far away to attend this event.

Below are some videos from outside the Hilton Mumbai, which I think give you a good sense of how this event went. I feel bad for anyone who attended but then dealt with this, and also feel bad for any hotel guests who got caught up in all of this.

Ultimately this interest isn’t so surprising

Given the dynamics of how Gulf countries work, a vast majority of the labor market is imported from other countries. This presents a huge competitive advantage when it comes to hiring:

Interestingly Qatar Airways allegedly doesn’t even have a pilot shortage, unlike the rest of the industry. Qatar Airways CEO Akbar Al Baker has said that the Doha-based airline has had no issue hiring pilots — in mid-2022, he claimed that the airline received over 20,000 applications for just 700 spots, and that all of those applicants were qualified and type-rated.

When US airlines host recruitment events nowadays, not all that many people show up, and they seemingly can’t hire fast enough. Meanwhile when Qatar Airways hires in Mumbai, they might as well shut down the streets. While I’ve heard of some busy airline recruitment events, I’ve never seen something like this before.

What do you make of this Qatar Airways recruitment drive?

That's not a QR recruiting event, those videos just show footage of all the Hilton Diamond members filing in to the executive lounge for Happy Hour. I think this could actually be considered a "slow day" in terms of Hilton elites.

My observation from many years working in the Gulf, is indians are extremely arrogant and not a customer-friendly group of people. Many travel agencies in Saudi hire Indians and they make many mistakes, blame it always on others, etc. I can't imagine why QR would be recruiting Indian staff except as cabin cleaners and they already have bangladeshis for that work.

(Most of) Reddit is a dumpster fire leftist echo chamber, so no surprises there. I still remember that r/antiwork meltdown, it was fantastic. 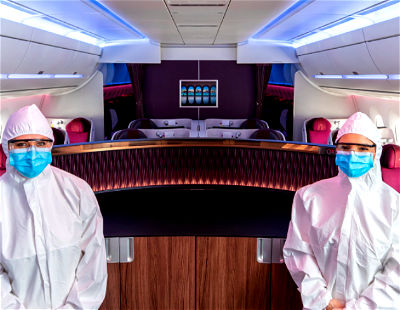