The Andaz Wall Street New York has been closed for most of the pandemic. The hotel will soon resume operations, but under a different brand.

The Andaz Wall Street will rebrand as the Hyatt Centric Wall Street when it resumes operations on January 26, 2022. The hotel’s restaurant Wall & Water, will reopen as of the same day. The hotel will continue to be a Category 5 World of Hyatt property, meaning the points requirements won’t be changed.

The 253-room Andaz Wall Street originally opened in 2010. The hotel’s guest rooms were modernized in 2019, and the lobby has also recently been enhanced. The hotel’s owners also plan to invest a further $5 million to improve the property over the coming years.

Why is the Andaz Wall Street being rebranded?

Here’s the explanation that Hyatt provided for why the Andaz Wall Street is being rebranded as the Hyatt Centric Wall Street:

Rebranding Andaz Wall Street to Hyatt Centric Wall Street New York was a strategic decision based on the hotel’s location in the heart of the world’s most exciting city, a key brand differentiator for the Hyatt Centric brand, which is known to embrace the locale and inspire exploration. The hotel is ideally situated at 75 Wall Street and offers a premier location for savvy travelers to discover the best that New York City has to offer with premium lifestyle accommodations in the heart of Wall Street.

Interestingly this isn’t Hyatt’s only property in New York that’s rebranding. In late 2021 the former Grand Hyatt New York reopened as the Hyatt Grand Central New York. That was clearly a cost cutting initiative, so that the hotel no longer had to maintain Grand Hyatt brand standards (including the club lounge).

With that in mind, I’m not sure what to make of this rebranding:

I suspect there’s more to this than in the press release, but it doesn’t seem like it’s quite as extreme as the Grand Hyatt rebranding, which was simply to avoid having to provide Grand Hyatt services.

The former Andaz Wall Street will be reopening as of January 26, 2022, but it’ll be known as the Hyatt Centric Wall Street. This is an interesting direction for the hotel to take, as Hyatt Centric is a less premium brand. While it’s claimed that this was simply a strategic decision based on the hotel’s central location, I suspect there’s a bit more to this.

What do you make of the Andaz Wall Street rebranding, and what do you think the motive is?

Also extra slight clarification, it was the first Andaz in the city. 3rd in the chain - after London and WeHo. 4th was San Diego (rebrand) and 5th was... 5th Ave. Extra fun fact - part of 5th Ave was meant to be the first urban Hyatt Residence Club, hence the hotel having a lot of different suite categories. I don't know how that hotel maintains the rates it does considering how much the service has deteriorated and the lack of any renovations.

There are actually two other Hyatt Centrics in NYC, so this will be the third. This particular Andaz property has been troubled from the beginning-- I remember once reading before opening, the property owner was given projected room rates from Hyatt of $500 per night, which given the location is a bit ridiculous. I think given the actual room rates for this location, a Centric is much better suited.

With the lack of business travelers and the neighborhood becoming more residential, the downgrade makes more sense. Plus people who stay in this neighborhood are tourists, many foreigners stay in the Financial District and looking for better value than what is offered in other parts of the city. Hopefully the new restaurant will not charge $75 for a burger and a bourbon, and actually offer decent food, so us locals will want to go there. 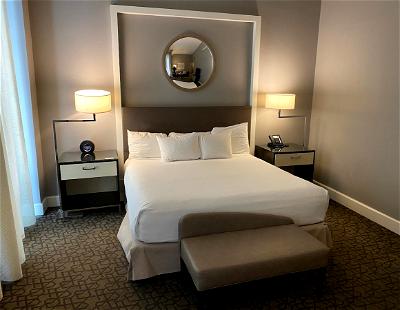 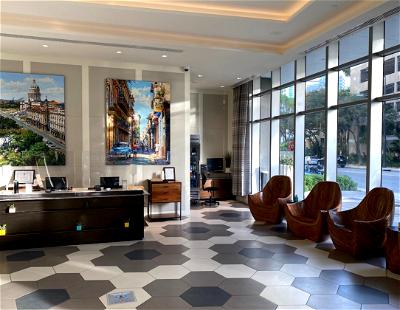