The only good thing about misconnecting at IAD this past weekend was having time to check out the new Lufthasa lounge at IAD. The lounge is located near gate B51, which is quite a hike from the C&D concourses, where United flights depart from. First you have to take the shuttle to the A&B concourse, which takes five minutes at most, but it’s a long walk from there. It took me a little over five minutes, but I was walking pretty fast. Either way, it’s a nice walk since it’s past all the fun airlines, like Austrian, Air France, SAS, South African, Virgin, etc. The B concourse is beautiful, compared to the massive trailers known as the C&D concourses.

It’s pretty easy to spot the lounge, given that the exterior is bright orange. The sign says that that the lounge is open from 1PM until 7:30PM. Upon entering there’s a desk on the left. The nice thing about this lounge is that you can use it as a Star Gold traveling domestically, even if you’re a United or USAir Star Gold! 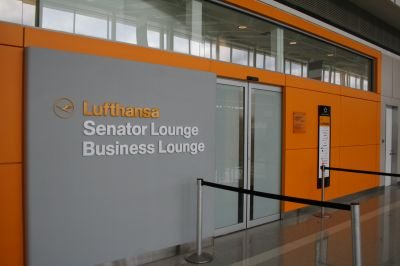 The agent admitted me to the Senator lounge, which was located to the left. To the right there was a set of stairs which lead down to the Business lounge.

The Senator lounge is a decent size, with tables, bars, stools, and a large seating area (located on the other side of the wall in the picture below). 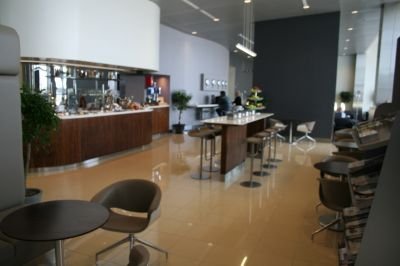 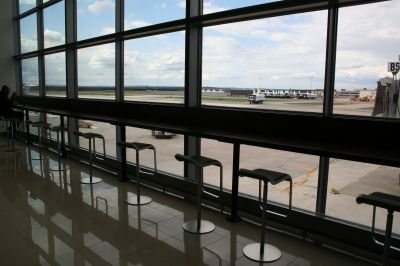 The food spread was fantastic, especially when you take into account that we’re at Dulles Airport. They had salad, all kinds of meat (both hot and cold), potatoes, German Pretzels, fruit salad, cheese, sandwiches, wraps, cheesecake, cookies, gummy bears, jelly beans, etc. And it goes without saying that all beverages are complimentary. 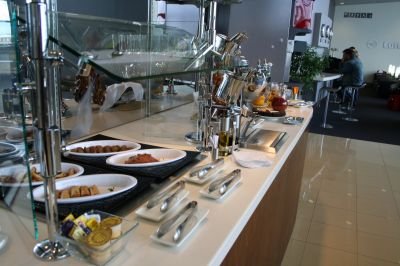 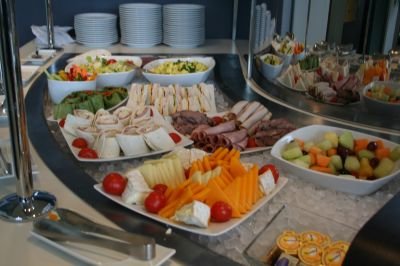 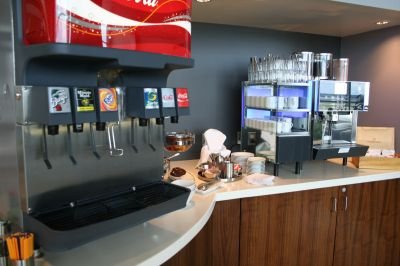 There are also two computers in the lounge for complimentary use, although otherwise you have to pay for internet, which kind of sucks. Still, this lounge is awesome, and I highly recommend checking it out before your next domestic flight.

I had a two day business trip attending a conference at a hotel near the Dulles airport and, of course, made my pilgrimage to the LH Senator lounge. With my gold card, I was able to enter the lounge with only my United boarding pass (ORD – IAD) so I had no LH and/or international fights that day. I wasn’t sure if they would honor my inbound boarding pass but they did. Once inside, I noticed that the lounge was pretty full of many Japanese getting ready to board the ANA flight. The food buffet looked a bit depleted. One of the staff members asked if I was not in a hurry to wait ten minutes and they were ready to replenish the entire buffet as the ANA passengers were getting ready to leave. And, as promised, the buffet was given a whole, brand new array of tasty (hot and cold) treats. It was certainly worth the wait. I opened up my lap top and enjoyed the free Wi-Fi given to all visitors in the lounge. Two days later, I returned and enjoyed the lounge again before taking the train to Terminal C for my United flight. I did stop in the United Club for a quick drink as well. Of course, no comparison. I’m glad that the LH lounge is not in the United area. It would be run over by UA Gold and 1K people. So a nice little get-a-way that I hope no one else discovers, even though it would be a great money maker for LH as they charge United for each non LH passenger a fee for using their space.

Was at the Senator Lounge at IAD today, ... Great spot... Nice food for a US lounge, as this is normally bad or not there, like the UA lounge in ORD.. BTW the Wifi is free no..