The mystery keeps getting stranger. While the FBI hasn’t had any luck with its investigation, did a pilot just capture the infamous LAX jetpack guy on video?

Basics of the LAX jetpack guy

Over the past few months, multiple airline pilots on approach to LAX reported seeing someone in a jetpack flying dangerously close to planes:

The FAA & FBI have been thoroughly investigating this, though as of now no findings have been made public. This situation is incredibly mysterious for a variety of reasons:

Was the jetpack guy caught on camera?

On December 21, 2020, Sling Pilot Academy flight instructors caught what appears to be a jetpack on camera. They were doing some training flights at around 3,000 feet near Palos Verdes, south of Los Angeles, with Catalina Island visible in the background. Here’s the video:

It’s worth emphasizing that we don’t know for sure that this is a jetpack at all, or that this is the jetpack that was spotted near LAX. But this does raise quite a few questions:

The jetpack guy situation keeps getting stranger. In the past few months there have been reports of a guy in a jetpack dangerously close to LAX.

The FBI and FAA have been investigating this, and if the person were caught, they could be looking at some serious punishment. It’s a mystery how he has gotten away with this.

Now someone has been spotted in a jetpack over the Pacific Ocean not far from LAX, at a high altitude and high speed. While there’s no guarantee this is the same person who was near LAX, it sure seems like it could be.

What do you make of this situation, and the jetpack spotted on video?

We still have a long way to go. We assume it was a "guy", not having any evidence what gender this individual identifies as.

This is a helium-filled balloon, nothing more. Jetpacks have difficulty flying at that altitude and for those time frames. Drones have almost as much difficulty with the altitude and range. A helium-filled jetpack-shaped balloon is the simplest and easiest answer to this "mystery". For $20 and a tank of helium, you could create dozens of sightings of a "jetpack" in the area. With the relative velocity of the observer, it could also seem like they are "flying" and of significant mass. 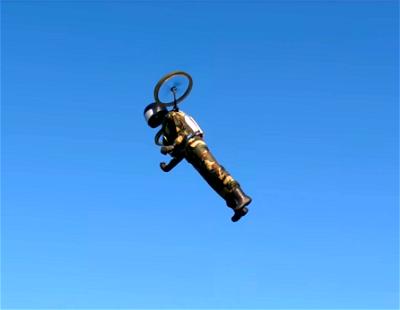