I actually just have no clue what’s going on here…

Does this video show a UFO?

A video has been uploaded that allegedly shows a commercial aircraft avoiding a UFO. The claim is that this video was filmed on Singapore Airlines’ January 17 flight from Singapore to Zurich (SQ346), which was operated by an Airbus A350-900. The video captures the plane minutes before landing, as it’s on approach to Zurich Airport.

What does the video show?

It’s claimed that we know this wasn’t a drone or bird because it was invisible on the radar, and also because the pilots could clearly see this from so far away.

I’m seeing mentions of this video in the mainstream media, so I wanted to cover the story because this video is either totally fake, or I’ve just totally lost it (both of which are real possibilities).

Why this video appears to be fake

Something about this video doesn’t add up, if you ask me:

I can’t stop watching this video because I’m determined to make sense of this video, but just can’t. My best theory here is that:

Am I missing something obvious? The irony is that I absolutely believe in life on other planets and UFOs in some form. But videos like this that appear fake sure don’t help our cause. 😉

A video has been uploaded that allegedly shows a Singapore Airlines A350 nearly colliding with a UFO. Personally I’m skeptical, because there are so many things about the video that don’t add up.

I’ve watched this video so many times now, and can’t wrap my head around it, so someone please enlighten me! And I’m not just looking for confirmation that this is fake, but can we actually find the original video, and/or figure out what was doctored here? Collectively you guys know everything, and I know this is no exception!

What do you make of this alleged UFO video?

Can we wonder who was on board that plane? Maybe some nuclear war fighting hydrogen bombers? Might that be what ET was suggesting we look into?

Ben, Of course UFO's and ET's don't exist (?) We have been told, taught in our schools, in our religions, and from our Govt's that they don't. And if anyone says yes, they are declared as exotic, mentally impaired or dilusional. Maybe now we will begin to have clarity. Recently from retired Israel defense chief Haim Eshed stepped forward. And broadly from Nick Pope who have first hand experience while working for their governments. Ie; the cats out of the bag. Everybody Relax. Haim Eshed https://www.nbcnews.com/news/weird-news/former-israeli-space-security-chief-says-extraterrestrials-exist-trump-knows-n1250333

An Unidentified Flying Object is not always an UFO... Just saying 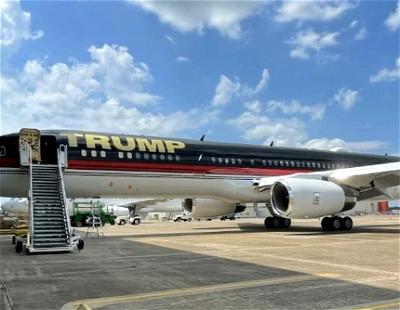