It goes without saying that everyone has different preferences for flight times. For example, some people are morning people, while others are night owls. Some people can sleep on a plane without issue, while others struggle to sleep without the perfect conditions.

As a morning person I’ll take a 6AM flight over a midnight flight any day of the week, while I’m sure a night owl would have exactly the opposite preference. Nonetheless when it comes to eastbound flights, I often get stuck on flights that aren’t ideal, but that I still tolerate.

For example, I hate taking eastbound domestic redeyes since I struggle to sleep on planes without a flat bed. When I find myself on these flights, I usually hate myself the entire time for having chosen to book the flight. But when I get to my destination I sure do appreciate the efficiency of it, and usually feel great after taking a nap for a couple of hours upon landing.

So there are a countless number of US domestic eastbound flights that are redeyes, though it’s much rarer to have something like that on a westbound flight.

On that note, I think I may have come across what might be the least pleasantly timed westbound domestic flight ever.

There are quite a few airlines that operate late night flights from the east coast to west coast. For example, JetBlue has a flight that leaves New York at 10:58PM and gets to Los Angeles at 2:13AM.

However, Alaska has a seasonal flight that I think takes that to the next level. Take a look at Alaska’s seasonal Chicago to Anchorage flight, which operates with the following schedule:

If I’m flying business class I quite like JetBlue’s late night flights from the east coast to the west coast, since I can sleep most of the way. But personally I couldn’t imagine taking the above Alaska flight in either first class or economy, as I’d be miserable for almost the entire seven hours.

Obviously a lot of people will still choose this flight, I’m sure. Alaska is popular in summer, there’s a lot of daylight, and it’s a great option for someone to finish a day of work, have dinner, go home, pack, and still fly to Alaska that night.

Furthermore, this is extremely efficient aircraft utilization, since the plane would presumably otherwise be sitting on the ground somewhere.

However, I’ve never seen a domestic US westbound flight that’s this long with a schedule like this. Alaska Airlines also operates some overnight flights from Seattle to Alaska, but those flights are over three hours shorter, and the time change isn’t as significant.

Does anyone know of another domestic flight with a schedule like this? Would you take this Chicago to Anchorage flight for how efficient it is, or avoid it?

6 hrs sleep, awesome! It's the 3 hr redeyes that are sadistic. I flew redeyes every other week for 8 yrs (no lie flat :p ). Just bring a blow up pillow, get a window seat and sleep against the wall. Even better than FC because F seat is too far from window.

Nice to know these west bound redeye gems as they can save the day when schedule is tight and a day flight is not an option. There is also a Hawaiian Air redeye flight from Las Vegas to Honolulu which is pretty much the only redeye from north America to Hawaii (best of my knowledge) that might work good for some biz travelers with tight schedules (good luck scoring the lie flat 1st class since its usually sold out weeks if not months out).

"For example, Ford can fall asleep anywhere, but can’t stay asleep. I’m exactly the opposite. I can’t fall asleep anywhere, but when the conditions are right, I can stay asleep for a long time." Ben,i think it a question of habit,when one is really really tired he/she will sleep just anywhere . If you are exhausted it is scientifically proven you can't stay awake no matter the conditions so the best is that you party party party the night prior to your redeyes flight without taking a nap before departure and believe me you ll be snoring even in the line to get onboard . 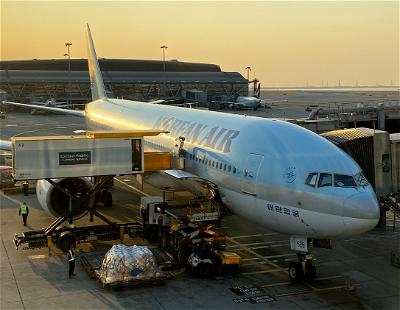 51
Prediction: Which Partnerships Is Alaska Airlines Likely To Lose?