For the past decade or so, a vast majority of new pilot jobs in the US have been at regional airlines. That’s because after 9/11, when airlines weren’t doing well, most of the legacy airlines had a hiring freeze. Some didn’t hire any new pilots for nearly a decade. Given the mandatory retirement age, we’re now seeing lots of pilots retire, and as a result, the legacy airlines are once again hiring pilots.

The flip side of that is that there’s a shortage of regional airline pilots. That’s both because many regional pilots have now chosen to join legacy airlines, and also because many decided not to pursue careers in aviation following 9/11, given the lack of job security.

One airline that can’t hire pilots fast enough is Horizon Air, a subsidiary of Alaska Airlines. The Seattle Times has an interesting story about the issue Horizon Air is having with a pilot shortage, which has forced them to cancel over 300 flights this past month:

On Thursday, Horizon Chief Executive Dave Campbell sent a memo to employees announcing that the airline is cutting multiple flights in August and is studying its fall and winter timetables “to ensure we have schedules that we can reliably operate.”

Campbell wrote that the pilot shortage, coupled with the airline’s unprecedented growth as it has added aircraft, “created a perfect storm.”

“June will go down as our ‘bump in the road’ — our moment when things got too far off track, and now, we must decide how to recover,” Campbell told employees. “We have established a war room to daily manage potential cancellations.” 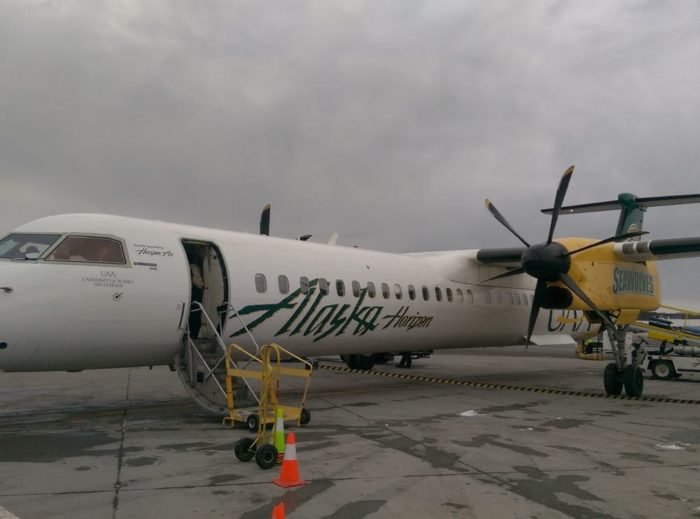 To make sure the rest of their summer operates more smoothly, Horizon Air has canceled about 6% of their August schedule. On top of that, Horizon Air is doing everything they can to address the problem. They’re:

But here’s what’s possibly the most interesting part of the story. Horizon Air’s pilot union is unhappy that the airline wants to offer pilots 200% overtime pay, and instead wants them to pay the contractually agreed upon 150%. Essentially the union views this as a bribe, and says it doesn’t address the long term issue that they have:

Horizon’s management and the Teamsters agreed in April on a new contract that specifies that overtime should be paid at 150 percent, not 200 percent.

In a letter to Horizon pilots last week, the union leadership — counterintuitively — objected to the company paying more than the contract stipulates and urged the pilots not to accept what it called a “200 percent bribe” to fly extra flights.

Greg Unterseher, director of representation for Teamsters Local 1224, said in an interview that the union objects to the company unilaterally amending the terms of the contract.

It doesn’t want management paying a handsome bonus now just to get through the crisis, then taking it away later.

I’m not sure I totally follow the union’s logic here. It’s clear Horizon Air is doing everything they can to hire new pilots, and the contractually agreed upon overtime pay is 150%. The union doesn’t want management paying a bonus to get through the crisis and then “taking it away later.” But even if they “take it away later,” the pilots would get 150% overtime pay, as is contractually agreed upon.

You’d think as many pilots earning as much money as possible would be a good thing, especially given Horizon’s efforts to hire. It’s not like they’re trying to save money by not hiring pilots so they’re instead paying some pilots overtime, in which case I could understand the union’s objection. But this I don’t get…

A lot of regional airlines have pilot shortages at the moment, though it’s probably impacting Horizon a bit more than other airlines. That’s because many pilots who have the goal of advancing in aviation would rather fly jets than the turboprops that Horizon Air operates.

It seems like Horizon Air is doing everything they can here, though the union’s objection is an interesting one.

Not sure when Horizon is scheduled to get their first E175 but I would speculate that many Q400 pilots have transitioned or are in training now for the new airplane and thus are unable to help with the current shortfall. Complications associated with adding a new airplane type that management failed to plan for.

It is a bribe to get through a crisis. If they crewed the airline above an absolute minimum staff they would have a reserve and wouldn't be cancelling flights. $30-40 an hour is barely a living wage too. Remember, pilots are paid only when the plane is moving. 75 to 80 pay hours per month is an average block... despite spending many more hours at the airport flight planning and preparing for flights, not to mention all the time on the road in hotels... Pay more and you'll get more pilots applying. What we have is not a shortage of pilots, but a shortage of pilots willing to work for poor wages.

"I’m not sure I totally follow the union’s logic here." Snickered at that one. I don't follow the logic either, but it must have something to do with impacting union dues.