Frontier Airlines is an ultra low cost carrier that is known for charging fees for just about everything.

That’s why many people were caught off guard when last year they announced that they’d largely eliminate change fees. Now, about a year later, they’ve announced another change to that policy.

Last September Frontier changed their fee structure for changing and canceling flights. They went from charging $99 for all changes, to charging:

The logic of this makes perfect sense. They want to encourage people to feel comfortable booking Frontier way in advance, and if passengers’ plans change far enough in advance, they won’t be on the hook for any fees.

This fee structure also closely aligns with the costs airlines incur with making changes. If someone cancels a flight over 90 days in advance, it’s highly likely that the airline will be able to resell the seat. That’s not true if making the change just days in advance, though.

Frontier has now announced that they’re once again making changes to their fee structure.

As is far too common with airlines, I can’t help but feel like they’re being a bit deceiving when it comes to how they’re marketing this. For example, they Tweet:

Ever worry your plans will change after you book? Well, now if you change your flight 60 or more days in advance you will pay $0 in change fees!

Alrighty, except they already didn’t have change fees close to departure, so how is the $0 change fee new?

What’s actually changing here? Well, Frontier has actually modified fees once already between now and then 2018 policy change. So here’s a look at the chart:

So while I continue to appreciate that Frontier is one of the only airlines not to have change fees for at least some cancelations (much like Southwest, which is the leader in this regard), no change fees isn’t new, and in fact this change is negative.

This is a bit of a negative change but still almost best in field. Can't understand why there wasn't a huge ruckus when Alaska removed their no change fee policy on awards! To get any decent reward on AS partners you have to book a year before the event. By eliminating the grace period booking AS rewards is a crap shoot. A year ago I guessed that Mexico in late Nov would fit my schedule. In Aug I discovered that mid November is the only option so had to pay $250 in change fees I am seriously rethinking my association with AS because it really increases the potential cost of an award! So good on Frontier

I disagree...it is new that someone can make changes without fee, say, 65 days in advance. Previously, that would have required a fee. You can debate whether the increased fee after 60 days is worse. But this is one place I don't think they're actually being deceptive.

What one gives with the left hand will also take with the right. 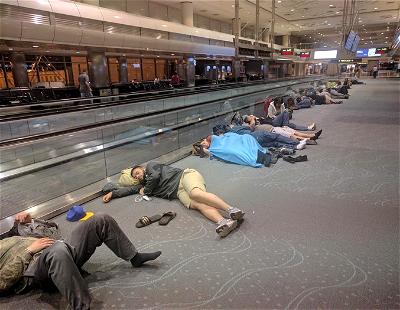