Emirates has just rolled out an A380 with a very special livery. Specifically, this five year old A380 is now sporting a “Year Of Tolerance” livery, which depicts people from diverse backgrounds and cultures holding hands in solidarity.

This is intended to celebrate “the UAE’s message of multiculturalism,” as 2019 is the “Year of Tolerance” in the UAE. This is being done just ahead of the UAE National Day, which is on Monday.

Yes, perhaps there’s a bit of irony to the UAE being a champion for tolerance, but I do think it’s a pretty livery, at least, and in theory I appreciate the message.

Today this A380 operated a very special 90 minute flight, with flight number EK2019. The A380 flew at low altitudes across the UAE, including over Um Al Quwain, Ras Al Khaimah, Fujairah, Al Ain, Abu Dhabi, Sharjah, and Ajman.

Emirates even set the Guinness World Record for the most nationalities on an aircraft. The over 540 passengers on the plane were 145 different nationalities. 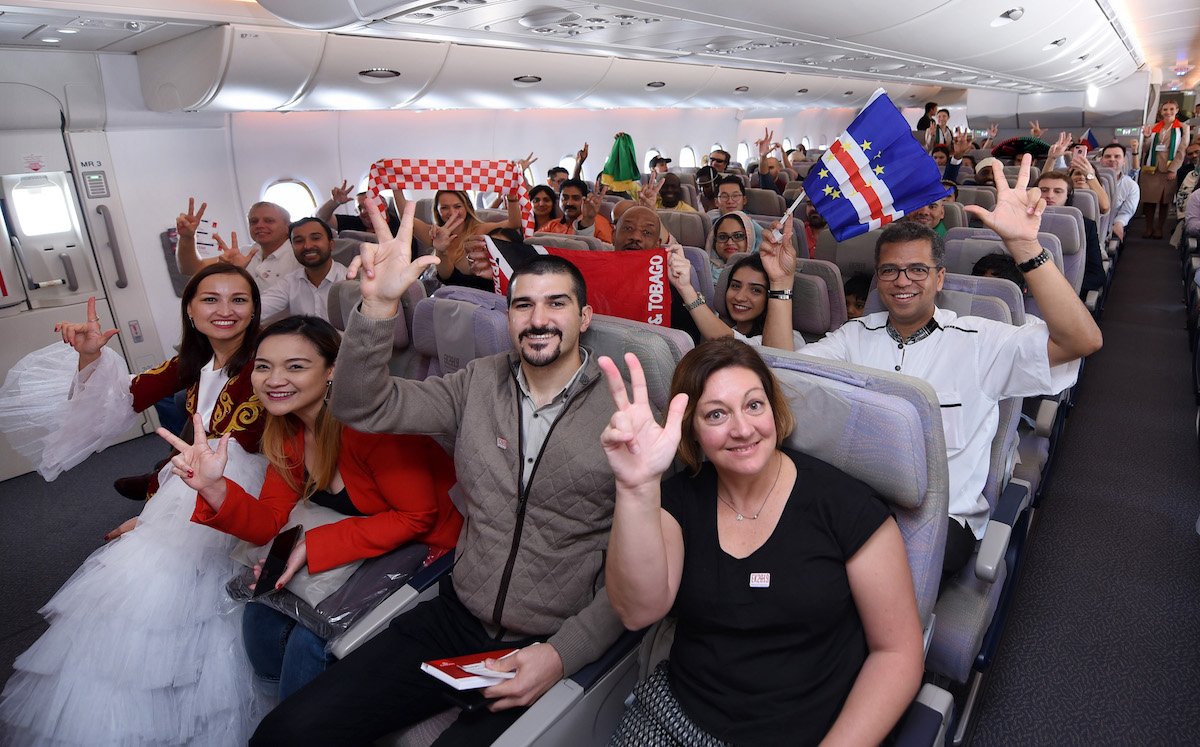 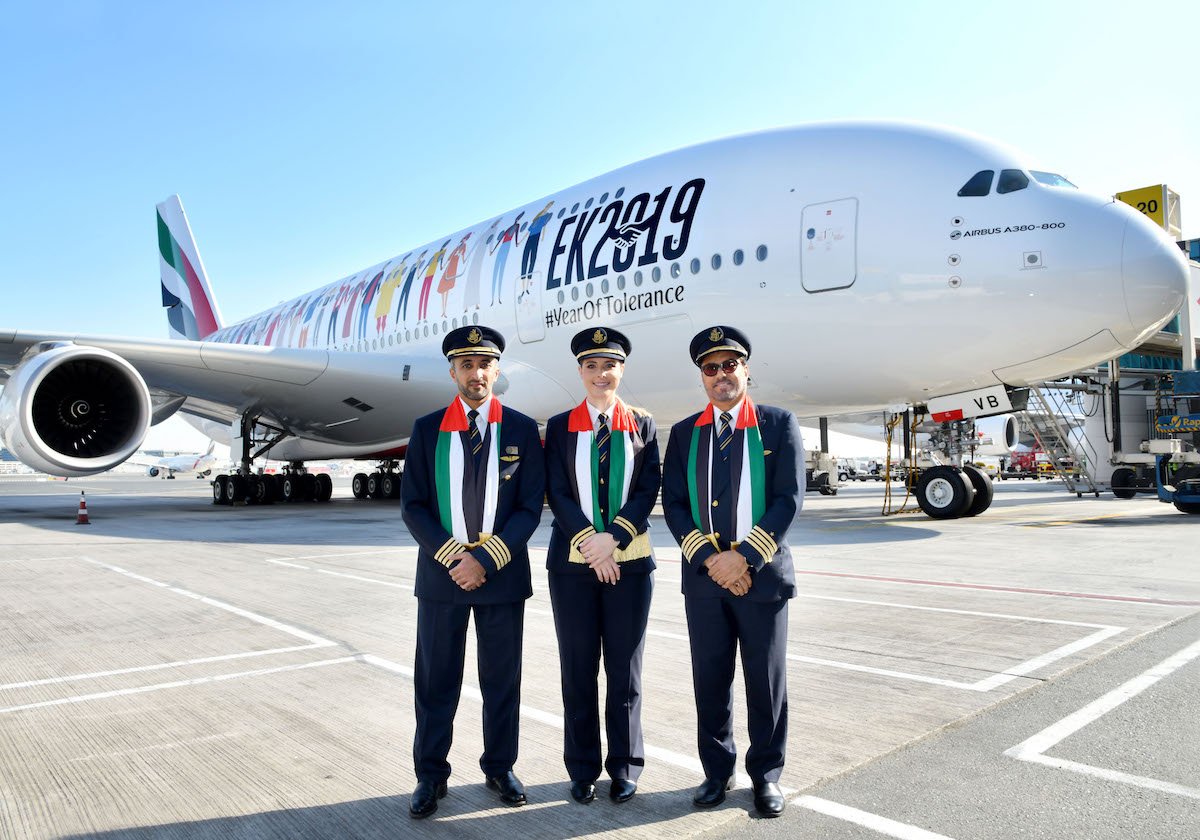 Meanwhile the 22 cabin crew were from 18 countries, and interestingly enough were led by an Emirati national (Emirates has very few “local” flight attendants).

Again, maybe it’s just me, but if the goal is to promote multiculturalism, why are three of the four highest ranking people onboard locals? Shouldn’t they be doing everything they can to promote how people from all over the world make the country run?

Emirates notes that the average Emirates flight has about 15 nationalities among the crew, and carries an average of more than 50 nationalities in total. 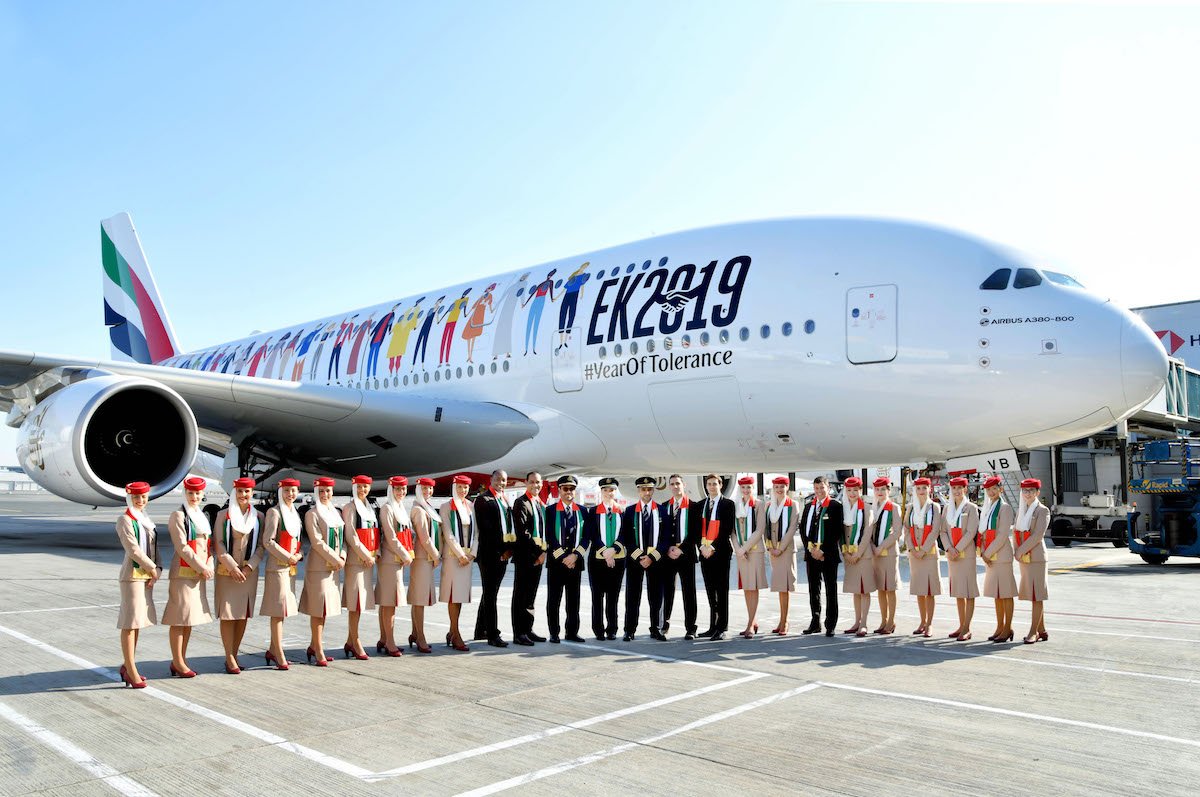 This is a cool initiative, and there’s no doubt that the UAE has a lot of nationalities. It’s probably what I like most about the UAE, because there aren’t many places where you’ll naturally interact with people from so many countries in a given day.

At the same time, the concept of the UAE championing tolerance is interesting. Don’t get me wrong, as far as countries in the region go, the UAE is progressive, but I’m not sure I’d go so far as to say that the country is openly “entrenching the values of tolerance, dialogue, coexistence and openness to different cultures” in the way that this initiative is intended to.

On a day-to-day basis I do find the country to be pretty “open” to people, but I wouldn’t say that’s systematically reflected in the laws.

Sorry, that probably ended up getting a bit more political than it should have. Just my two cents…

@ Johnathan Israeli citizens CAN enter the UAE but they need to apply for visas first. The Israelis treat Palestinians hideously so they have only themselves to blame if they are not welcome in other areas of the world.

@Jonathan As far as I am concerned, passport holder from the following countries aren't also allowed to Israel: Algeria, Bangladesh, Brunei, Iran, Iraq, Kuwait, Lebanon. It is political and to your disappointment it works both ways. Each country according to its foreign policy has the right to impose restriction at its borders and to implement immigration policies that best suits them. So you are complaining against the fact that Israelis aren't allowed in some countries but for you it's ok if Israel decides to impose a ban on some passport or individuals? Isn't it a bit of double standard?

At the bottom line, none of the 9 million Israeli citizens can enter the UAE, unless this particular Israeli has another nationality. This is ugly discrimination, and the national airline celebrating “Year Of Tolerance” as long as no Israelis taking part in it its nothing but hypocritical joke.