While the beginning of the year is a positive time for many (well, until January 2 rolls around and new year’s resolutions have already been broken), it can be a bit tougher for those of us who are airline and hotel status obsessed. For many programs, elite qualification counters reset on January 1. So while yesterday I had still more than double qualified for top tier status with my three favorite programs, today isn’t looking quite as accomplished. 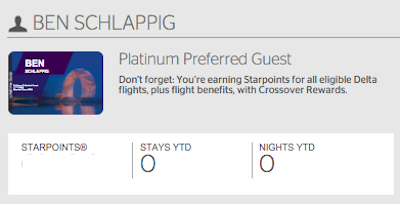 The good news is that January 1 is also the date on which credit card airline credits reset, which takes the sting out of a new year a bit. In my case it means I just picked up $500 in American Airlines gift cards plus $250 in airline tickets.

Here are the four cards I have which have annual airline credits:

American Express offers a $200 annual airline fee credit on their Platinum Cards. The “counter” for this resets on January 1 of each year, so if you have the card you’re now once again eligible for a credit.

Each year you have to designate an airline for your airline fee credit, which can be done at americanexpress.com/airlinechoice.

Here are the airlines you can choose from: 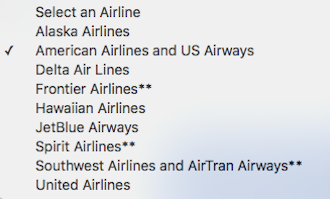 The terms and conditions state that airline fee credits exclude the following:

Anecdotally, however, many report having luck purchasing airline gift cards and having those reimbursed. For example, last year I purchased two $100 American Airlines gift cards, and they were reimbursed a couple of days later.

The American Express forum on FlyerTalk has individual threads dedicated to reimbursement reports for each airline, including Alaska, American, Delta, Hawaiian, JetBlue, Southwest, and United. As you can see, anecdotally these credits can be used for a wide variety of things, from lounge memberships, to cancellation fees, to status challenge fees, to (in many cases) gift cards.

Personally I just purchased American Airlines gift cards for all three cards totaling $500 (in increments of $50 and $100), and will report back as to whether they reimburse. The key seems to be to purchase them in smaller increments, so not $200+ at a time, for example.

This fee credit is even more straightforward than the one offered by American Express. It’s $250, and it applies on any airline and for any purchase processed by an airline. So it doesn’t have to be a “fee,” but rather can be a ticket purchase, upgrade, etc.

For more on the airline credit see my previous post.

What also makes the Citi credit different than the American Express credit is that it isn’t based on a strict cardmember year. Instead the 2016 credit became valid as soon as the December 2015 statement closed, which for me was several weeks ago. So I’ll report back when that posts as well.

This card is so awesome all around, between the airline credit and all the other amazing perks it offers:

While I hate when the year “resets” in terms of elite status, I do love picking up ~$750 to spend on airlines thanks to the credit cards I carry. If you have any of the above cards, you can go ahead and maximize the benefits whenever, just make sure you’re using the credit for the correct airline (at least with Amex).

Anyone else redeeming their 2016 credit card airline credits already?

@Ben I thought about that as well, but it says that the annual fee is $250 in this article. So the math doesn't work :-/

@Debi The Citi Prestige card does have a $450 annual fee. Lucky was referring to a $250 airline credit which you can use to purchase tickets for any airline, which effectively reduces your annual fee to $200 annually.

How about a post noting programs that allow some of the prior year's qualifying activity to "roll over" to this year, if such a thing exists.