On New Year’s Eve/New Year’s Day (depending on where in the world you are), Cathay Pacific had some insanely low premium cabin fares for travel originating in Vietnam.

As I shared after the fact, it looked like a ton of people booked these fares, and Cathay Pacific first class cabins were in many cases sold out altogether months and months in advance.

The airline said that they’d make a decision on Wednesday about whether or not to honor these fares, and sure enough, they have. Cathay Pacific will be honoring all of these first and business class mistake fares — WOW!

Happy 2019 all, and to those who bought our good – VERY good surprise ‘special’ on New Year’s Day, yes – we made a mistake but we look forward to welcoming you on board with your ticket issued. Hope this will make your 2019 ‘special’ too! #promisesmadepromiseskept #leassonlearnt

Happy 2019 all, and to those who bought our good – VERY good surprise ‘special’ on New Year’s Day, yes – we made a mistake but we look forward to welcoming you on board with your ticket issued. Hope this will make your 2019 ‘special’ too!
.#promisemadepromisekept #lessonlearnt

I have to be honest. I didn’t want to put negative energy out there, but I thought the odds of Cathay Pacific honoring the first class mistake fares was slim, so I’m extremely pleasantly surprised by their decision.

Back in the day I felt like I had gotten pretty good at predicting whether or not mistake fares would be honored, though nowadays I really feel like it’s anyone’s guess.

I’ll go so far as to say that I think this might just be the mistake fare of the decade. I can’t think of another widespread case where an international first class fare this low was honored.

What a start to the year!

Were you able to take advantage of this fare, and are you surprised to see Cathay Pacific honoring?

I have some downtime on a layover and thought I would catch up on some old OMAAT articles I'd always wanted to read and comment on. I took advantage of this mistake fare and traveled to Vietnam and Japan in the fall of 2019. (Oh how I miss that time now!) Anyways, I thought I'd share an interesting anecdote that has always left me with a weird feeling. I worked for several years peripherally for a defense contractor in the U.S., doing mostly marketing work. Nothing about my work was classified or pertained to national security in any way, although I did frequently come in contact with company leadership and employees who worked on highly sensitive projects and material. These interactions were never classified; at no time was anything ever conveyed to me that would have been considered pertinent to national security. I should also mention that my father (now deceased) and a cousin *did* in fact work in government, in positions that required top secret security clearances. But I have never been subject to any clearance requirements or any such investigative scrutiny. Anyways, I had put together a rather complex itinerary while taking advantage of this mistake fare. It essentially had me traveling to Tokyo via Chicago, onward to Hanoi and then back to Boston, then to Washington DC and then back to Boston, onward to Hanoi, onward to Saigon, onward to Tokyo and then to LA before ultimately returning to DC. All in the span of about three weeks. It was the most hectic and insane travel schedule I've ever had and I loved every minute of it. (But I was TIRED at the end of it all.) On my second night in Tokyo, I went to a bar my father and I had frequented back in 2009 during our first visit to Japan. I had a few drinks and while the bar was empty, soon enough a fairly muscular dude with a southern accent showed up and ordered a whiskey. I heard his voice and, buzzed and courageous, asked him where in the south he was from. He moved closer and told me he lived in California but was originally from Virginia. I mentioned I lived in Northern Virginia and we spent a couple hours chatting about the US, politics, travel and what not. He asked me a lot about my trip and was amused at the mistake fare aspect of it and how many legs of travel I'd arranged. It was a friendly but wholly unremarkable chat, I thought. We parted ways and that was that. The next day, while touring the shrine near Harajuku, I felt a tap on my shoulder. It was the same guy. He claimed to have been sightseeing as well and exclaimed surprise at seeing me. We talked briefly and then went our separate ways. On the fourth day in Tokyo, I saw him again. This time I was quite a ways from both the bar we'd met at and also the Harajuku area. Now, I was starting to get suspicious. But we didn't interact and I'm not sure he even noticed me. It was certainly him—it is easy to spot 6 foot tall muscular blonde guys in Tokyo. I felt it was a little insane to see this person three times in such a huge city. But I quickly focused on other things and it didn't bother me. I'm not a conspiracy nut but I've always wondered. Did something about my itinerary cause a red flag that warranted someone being sent to check me out? Especially considering my background and that of my family members? (I should also mention that while I am an American citizen, my extended family is foreign.) If so, I guess I'd say kudos to the United States for doing the legwork. I think if this was some kind of recon mission, this guy pretty much figured out I was some weird miles and points-loving tourist but he kept tabs just in case. Or maybe it's all just some small-world coincidence that happens more frequently than you think. I guess I'll never know!

I guess Emirate and Malaysia Airlines can count as ones that don't make good on their mistake. I just got an email today that my first-class flight from/to Kuala Lumpur to Dubai on Emirates (bought through Malaysia Airlines) got canceled because of "This is due to an error where incorrect first-class fares". Worst of all, the cancellation comes 10 days after I booked the flight! The following is what I got! Malaysia Airline / Emirates are terrible! "On behalf of Malaysia Airlines, this email is to advise you that your booking between KUALA LUMPUR and DUBAI issued between 01JAN-06JAN 2019 has been cancelled. This is due to an error where incorrect first-class fares were created and published on online travel agents (OTA). Due to the discrepancy with the fare price advertised, we are unable to proceed with any tickets issued on this fare error. We are very sorry for any inconvenience caused and Malaysia Airlines has authorized a full refund. On your behalf, refunds have been processed to original form of payment. "

Nobody has suspected that this could be a huge publicity stunt by Cathay?? Probably their cheapest and most effective advertisement/press exposure ever! 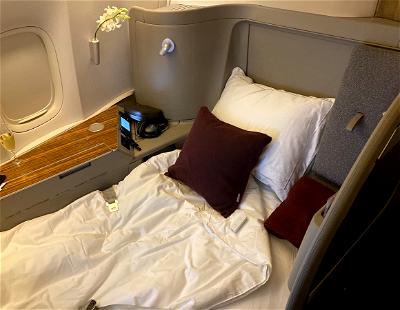