For those of you not familiar with Turo, it’s a peer-to-peer car marketplace. Think of it as the Airbnb of car rentals. Instead of renting a car from a big, faceless corporation, known for bad service, you rent a car from an individual, and it’s facilitated by Turo.

About two years ago I used Turo to rent a car for about a week. I had an overall positive experience — the pickup and drop off of the car went smoothly, the owner was communicative and easy to work with, and there were no issues with the vehicle.

Last week, I decided to give Turo another shot, as I’ve never been too fond of traditional car rental companies. I picked up the car from the owner in Manhattan and noticed immediately that the car had several problems — the check engine light was on and there were indicators flashing that the car had low coolant, a low right tire, and I later noticed that the rear parking sensor was broken.

I picked up the car in the middle of morning traffic and literally didn’t have time to check its state. I met the owner near Bryant Park, he jumped out, handed me the keys, and told me to hurry and drive away before I got a ticket. For those of you familiar with midtown Manhattan on a weekday morning, it’s not a place you can leave a car lingering for more than a few seconds without suffering the wrath of some angry drivers!

A warning bell went off in my mind right away. I had seen a review from another Turo user who had rented that car saying that he experienced a coolant issue and several other issues, calling it an “extremely unsafe vehicle.”  That said, most reviewers wrote the car worked well, so I thought it was a one-off and safe to rent. 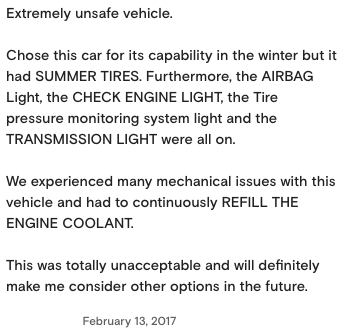 Two days after I picked up the car I became worried because the car started saying the engine was overheating when I drove it. Around that time, the air conditioning stopped working, and when I parked the car I noticed the engine making very loud and concerning sounds. I texted the owner and he admitted that he knew these issues were present when he rented me the car, but he “didn’t have a chance to rectify” them. He did say that I could take the car to a mechanic and he would cover the mechanic adding coolant to the car, up to $100. 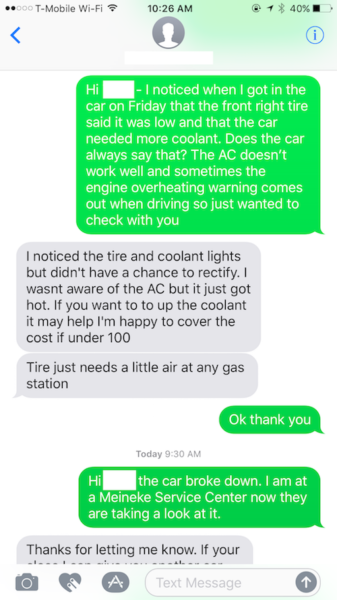 I planned to take the car to a mechanic the following day. Early that morning I was driving to get coffee when the car literally broke down in an intersection. As I was driving in the intersection, the car wouldn’t accelerate and then stalled. The engine was making loud, worrisome noises again, so I turned it off. I tried to turn the vehicle on again several minutes later but was unable. After several more minutes the car turned on, and I drove it immediately to a Meineke car service center.

At Meineke they told me that they believed coolant was leaking from the car. I contacted Turo, and they told me that I could end the rental and would be refunded 70%, as I had used the vehicle for three full days and had rented it for ten. I explained that at this point I didn’t want to continue the rental under any circumstances, as I felt the car was unsafe, given it had just stalled and broken down in an intersection. A few days later they reconfirmed in writing what they had already told me on the phone — that I would be issued a 70% refund. 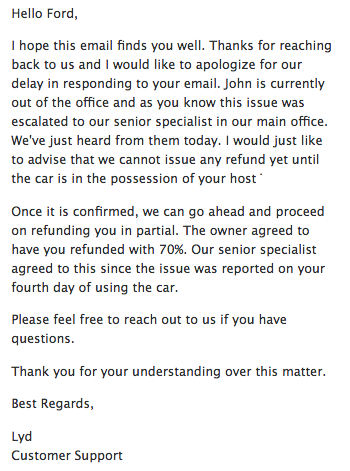 Turo was able to get ahold of the owner immediately after the car broke down and advised me that he had denied that the car had any issues when he rented it to me, so it was important that I was able to show that he knowingly gave me car in not-so-great condition. At Turo’s request, I sent them a screenshot of our conversation in which he acknowledged that the check engine/check coolant indicator light was on. In follow up calls I also mentioned that I had seen other reviewers experienced the same issues with the car, but I was never able to get someone on the phone with the authority to make any decisions or issue a refund, so it was mostly a one-sided conversation.

This all took place seven days ago, and I have yet to receive a refund. Turo told me in writing in an email (as well as on the phone) that I would receive a 70% refund without any stipulations, but they have subsequently refused to honor the refund because the owner was able to provide a mechanics report stating the car does not have any problems. The customer service experience has been pretty horrific, and Turo seems to be much more concerned with protecting the owner of the vehicle rather than protecting the renter from an unsafe vehicle.

I guess the next step is to just dispute the charge on my credit card, given that they’ve charged me but aren’t holding up their end of the bargain.

There are lots of things to love about the “sharing” economy, including the overall better value that can be had, and that the typically horrific service from car rental companies can be avoided… or so I thought. This highlights one of the challenges with the sharing economy, though. When things go right, it’s great. When things go wrong, no one takes responsibility.

Has anyone experienced a similar issue with Turo? What would you do in this situation?

Wow, even Turo has their own "little pinks". Nice comment, Laura, how much did you get paid? Turo customer service is AWFUL. I used them once for a car rental in Montreal and it all worked fine. Recently, I went to book a car in England, and Turo says that I "cancelled the reservation in less than one minute" of making it, which I sure didn't try to do. So either I did so mistakenly, without knowing it, which speaks volumes as to the efficacy of their booking system, or I didn't cancel but their system "thinks" I did, which also speaks volumes. Either way, I was told by the people on their "chat line" that because I cancelled within 1 minute that my account was shut down. Sooo, I tried (and continue trying) to have my account reinstated. But I can't as I'm in this Turo customer service spin cycle of talking to the "chat" agent (I spoke with a customer service person over the phone and was told that they couldn't help me with this problem-I had to use the chat service), who asks me to send my driver license, a photo of me holding my driver license (!) and other items, which I do and am then told that "another department" will handle it and I will get an email from them. Then the "other department" sends me a cheery email asking "how did you like our customer service", as if they've fixed the problem, but then when I check my account/try to book, it says my I am still unable to rent cars. The latest word I got (today) from a chat room agent is that my inquiry has been "escalated" and I'll get an Email "soon". It seems nobody is in charge or has the power to assist. Typical result when a company doesn't spend money on customer service. Clownshow!

Yes, Turo does suck. I just used them for the first time and they are just price gougers. I rented a car for 8 days, it was $1,500. A lot of money. I went to change the start time to one hour earlier. So 9am instead of 10am. I text the host on the app and he said no problem, just update the time on the Turo app. My return time is 8 days later at 7pm. So there is no change in the number of days or 24 hour periods by me starting one hour earlier. And for that extra hour they tried to charge me another full half of a day. Crazy. After an hour texting and I called support. They didn't care. They just said that is the way it is. So for a customer that is renting a car for 8 days and paying $1,500 they are just price gouging to charge another full half day for a ONE HOUR change in the start time. I will never never never use them again. I recommend you don't either. Bad business people.

I agree do not use Turo. I wish I would have read your review before my trip. I used Turo as my car rental company because pricing was much cheaper. However after the first day I called to add me as a driver and maybe not have my wife as a driver. After 6 hours and talking to five departments and several managers in a different country Turo ended up cancelling my reservations and then charging me an additional $790.00 to get back the original reservation. They then blamed me for the error stating it was I who called them and requested the cancellation. Aside from costing me an unwanted $800 it also made me miss the activities we had planned on Sunday and put me in a foul mood for my vacation. What I found out from this experience (aside from never use Turo) is that the way they have structured their company is that they have all customer service and account management handled in a foreign country where they are poorly trained in how to run and navigate their systems and the managers are only authorized to offer a maximum of $30.00 to correct problems or errors and cannot make changes outside a set perimeters of the programming. Hopefully this will save others from having to deal with the same expensive frustration I did. 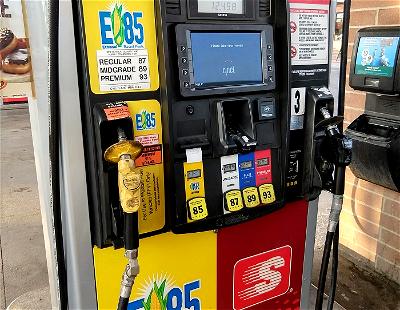 20
Does It Make Sense To Rent Flex-Fuel Cars?