I can’t say I’ve generally been very impressed by American’s food on domestic flights. For that matter, I don’t think Delta is any better. I also don’t generally put much weight into menus designed by celebrity chefs, since they’re basically just being paid a some of money to sell out their name. I’d rather airlines spend the money they pay to celebrity chefs on actually increasing their budgets for each meal.

That being said, American is rolling out some new menus today on transcon flights, and they actually sound really good (which isn’t to say that they’ll taste good, but…).

Why do I actually like this? Because these menus offer “lighter, fresher options” in addition to what American is already serving.

In addition to introducing new menus, American has also introduced directional menus to make sure that frequent flyers see a bit more variety. The first and business class meal changes will closely align with American’s international premium experience, and those in the main cabin will now have access to vegan meal options.

American highlights that some of the new dishes include the following:

For example, here are the current first class menus on eastbound flights, from Los Angeles and San Francisco to New York (the first menu is breakfast, the second lunch and dinner, and the third is snack flights, including redeyes): 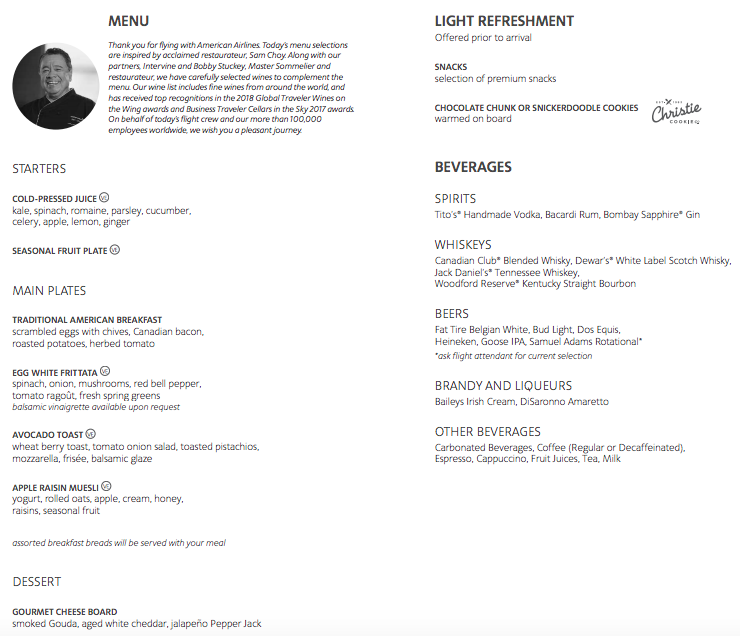 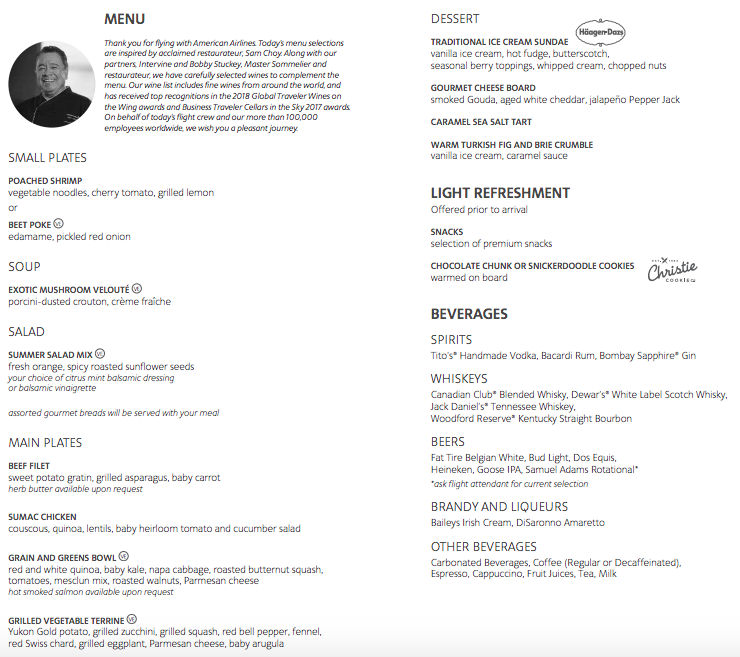 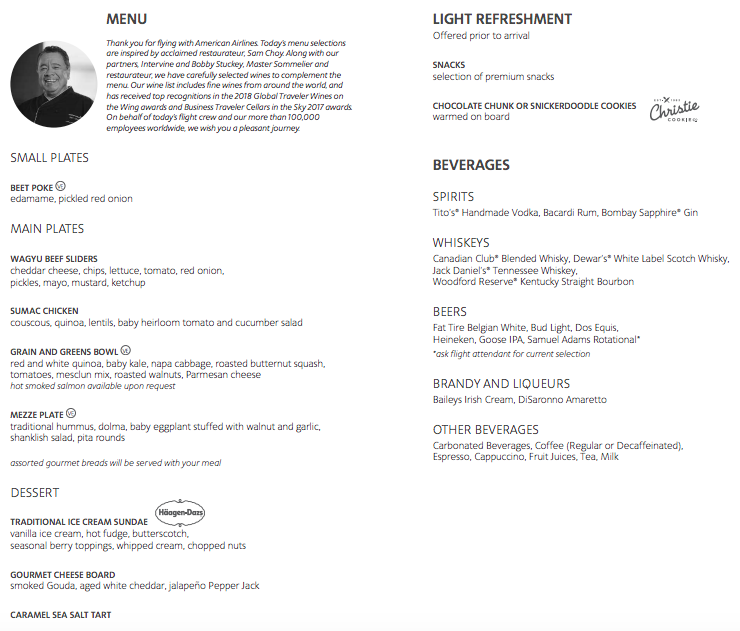 Then here are the current first class menus on westbound flights (the first menu is breakfast, the second lunch and dinner, and the third is snack flights): 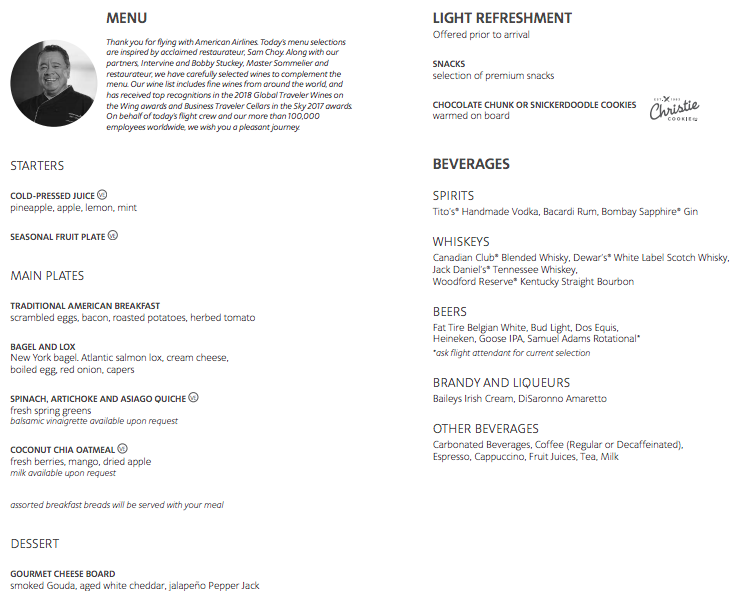 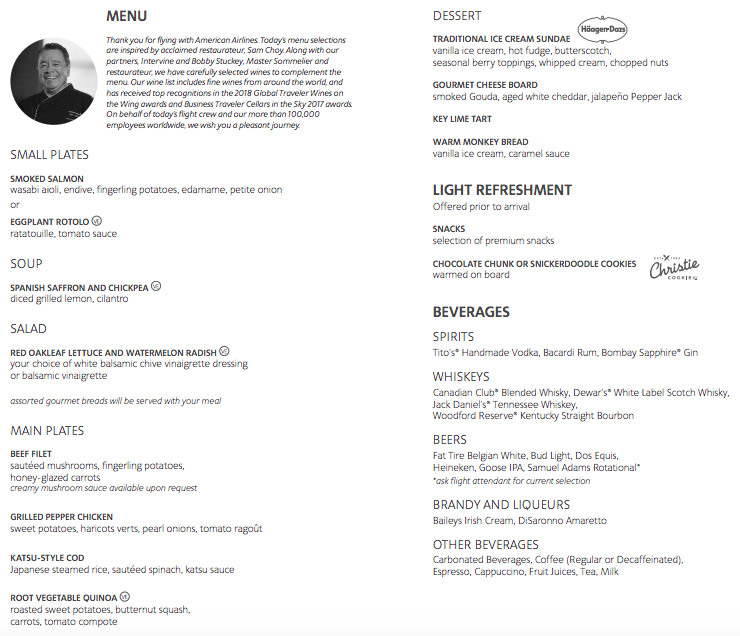 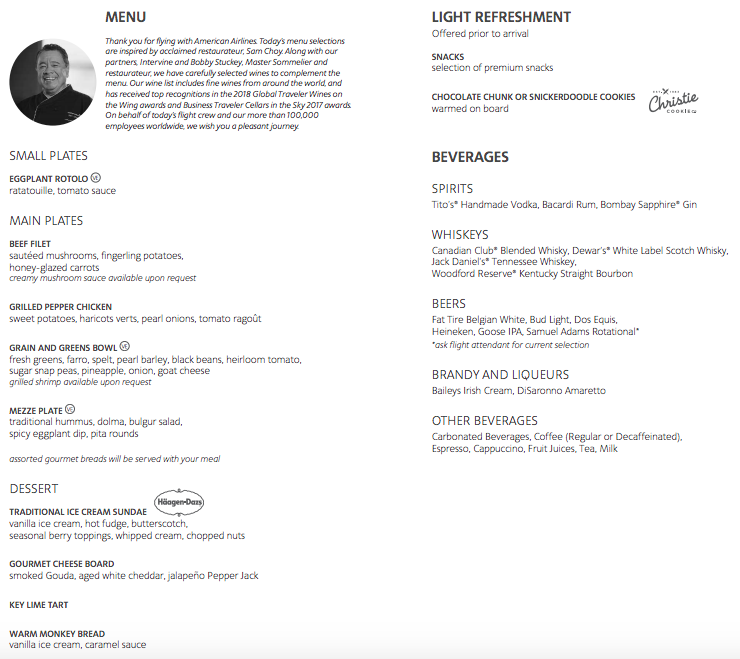 It goes without saying that the food probably won’t taste as good as it sounds, given the limited budgets they’re working with.

However, I’m still a huge fan of these lighter options. American has always been rather aspirational with the things they’ve tried to serve, whether it’s a lobster roll, wagyu meatloaf, or chicken and waffles.

If they’re going to experiment in this way, personally I’m thrilled to see them instead work on lighter “fancy” options, like avocado toast, egg white frittatas, grain and greens bowls, mezze plates, etc.

What do you make of American’s new “lighter” transcon dining offerings?

Personally, I would rather have menus designed by Sam Chui than Sam Choy.

Sam Chui would like the Sam Choy offering haha

Since I just had a delightful meal in Flagship Dining, I like the idea of lighter options for the meal I'll be eating on board in just a few hours. Also want to take the opportunity to say thank you--I'm flying first class JFK to LAX because of your careful coverage of the Iberia Air promotion, and I knew to come early to enjoy the Flagship lounge because you've written about it. It's been an absolutely lovely experience so far!