American is in a bit of a rut right now, and their employees, shareholders, and customers, all don’t really seem to like the airline. The airline is mismanaged under the leadership of Doug Parker. While he did a good job integrating American and US Airways, and has had an incredible career, it’s time for the airline to find someone new to lead the way.

That’s for a different post, though. Today I wanted to write about results from an internal survey that American has just released. American Airlines sent out a survey to their employees to get a sense of how they feel on a variety of topics, and The Forward Cabin has the details of that.

In this survey they had a bunch of statements, and asked employees to share whether they were favorable, neutral, or unfavorable towards them.

While they haven’t yet revealed the full results, they have shared the statements on which they got the most extreme responses from the nearly 42,000 employees who participated in the survey.

The three worst scores are pretty awful. Let’s look at what American employees had to say.

“Leaders at American Airlines make the right decisions that take care of our frontline team members:”

“Leaders at American make the right decisions that support me:”

“Leaders at American listen and seek to understand the frontline team member experience:” 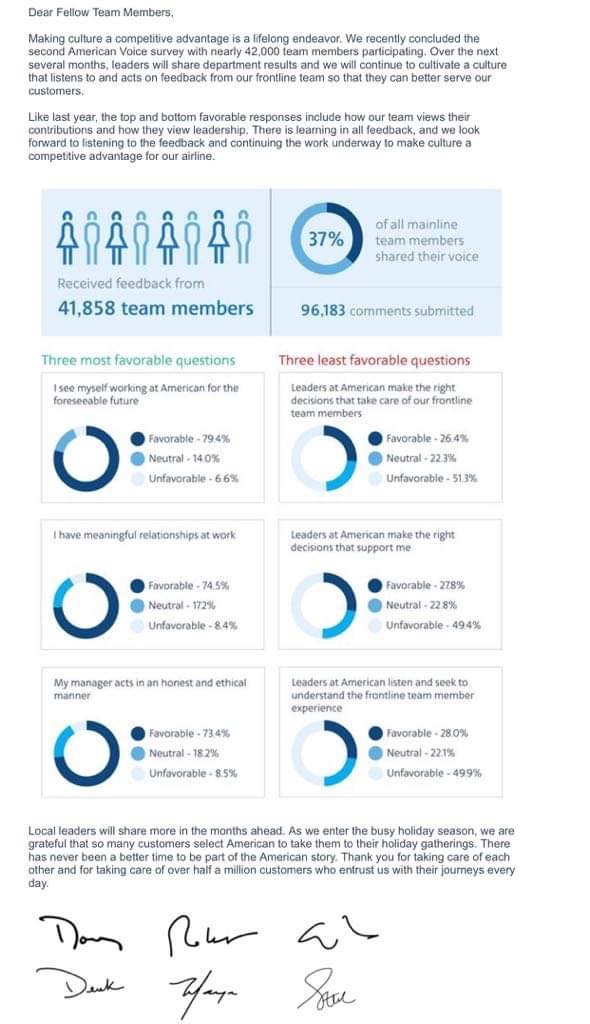 Are the results here surprising? No. Rather what I find quite surprising is that American not only does these surveys, but then publishes the results for all employees to see.

I’m of two minds when it comes to this.

On one hand, I respect a company that is willing to be this transparent in sharing just how unhappy employees are. They could just as easily not have these surveys, or at a minimum, not publish the exact results. So I respect them for publishing them.

On the other hand, it seems incredibly stupid to me to reinforce the unhappiness of employees in such a way without actually changing anything. American management should know that employees are unhappy. Go to an airport or take an American flight, and you’ll sure as heck notice it.

The problem is that these companies seem to love collecting data but don’t actually do anything with it. Personally I hate when companies ask me for preferences and then don’t deliver on them. That leaves a sour taste in my mouth, and they’re much better off just not asking for preferences in the first place. But when you ask me what I like and then do nothing with it, that’s annoying.

Similarly, what is American management hoping to accomplish here? They did a similar survey last year, and responses were terrible. This year the responses are even worse. And the worst responses all relate to management being out of touch.

So, ummm, if you’re going to publish these results, shouldn’t you act on them? And shouldn’t that involve Doug Parker showing himself out the door?

What do you think — should American be commended or ashamed for having these surveys and publishing the results?

Lots of people point to Doug Parker, but he's just the tip of the (leadership) iceberg that is sinking the gargantuan ship that is American Airlines. Let's take a look at some trouble spots: 1. People (HR) Department, namely Elise Eberwein and Patrick O'Keeffe. Strange that Elise retitled HR to People Service, because she doesn't care about people and certainly doesn't have a servant's heart. Both Elise and Patrick are former flight attendants, which tells you the whole story. Elise is a holdover from US Airways days, and has been attached to Doug Parker's coattails for 15+ years. She's know for being intransigent, myopic, and self-centered. Patrick somehow managed to get promoted (more likely got rid of) out of the IT department, which was a disastrous department under his watch, and into HR/People. He is a political lightning rod within the company, and is the single person responsible for the wording and execution of the employee survey. The survey was poorly designed and run in 2017, was changed for 2018 in hopes a different format would provide better results, and Patrick really didn't want to have a 2018 survey because it came the sime time that AA was laying off massive amounts of management when DP had told AA teammembers at the 2018 ALC (American Leadership Conference; management's annual offsite rager) that if you want a job at AA for life, then you'll have one. And of course, Patrick's department was the one that ran the numbers for DP and the AA Board to reduce headcount of employees aged 40+ in order to prop up the share price and preserve executive bonuses, leading to the headcount reductions. Patrick was the author of the BS letter that announced layoffs in June 2018 (https://onemileatatime.com/american-airlines-management-layoffs/). 2. Flight Service (head of flight attendants) department, namely Jill Surdek and Bradey Byrnes. Both are AA lifers and haven't held any jobs anywhere else, so good luck getting a fresh perspective from either of them on how to help the 27,000 front line employees/flight attendants do their jobs better and improve customer service for you, the paying customer. Jill and Brady are different personalities. Jill had no flight service background and had to go through training when she got her VP promotion. She is actually a really nice person to know and work with, but she is considered a "go getter" who "gets things done" which, again, doesn't move the dial if you keep your head in the sand and just rearrange the same grains of sand hoping to avoid the incoming tide. Bradey is highly politically leveraged like Patrick, only looking out for his own interests (salary and bonus) since getting promoted to managing director. Bradey is a former flight attendant who has no love for the employees in his care. Case in point: he is still dealing with the employee uniform fiasco (which he oddly created) and is rightfully the lightning rod for his part in approving the allegedly toxic uniforms to the employee workforce. So you can see why, with these outstanding lifelong airline employees in key positions, AA is in the position it's in. Go get your miles elsewhere, this airline is broken and won't be fixed for a long, long time.

Doing these type of surveys is normal. So is publishing the he results. Massive organizations like AA take time to evolve. Looking over the results what strikes me is the fact that they hate top management but love to stay and work for AA. Perhaps this is about dissatisfaction about profit sharing where Delta employees got so much better deal. As to flying AA as a business customer it is obvious that frontline staff (with a few exceptions) is dissatisfied, lazy and indifferent to customer needs.

Lucky, whether you use American English or British English, you do not, EVER, put a colon or semicolon within quotation marks. This is very much acceptable (though never in British English) for periods/full stops, question marks and exclamation marks, but NEVER for colons or semicolons. “Leaders at American Airlines make the right decisions that take care of our frontline team members:” NO. "...members": (American/British) or '...members': (British, à la James).