Well, in all my years of flying American Airlines this is a first for me. My apologies to HUT/G.

I made my tight international to domestic connection

Earlier I wrote about the tight connection I booked on separate tickets, as I was flying Delta’s A330-900neo from Tokyo to Seattle, and then connecting on American Airlines 42 minutes later from Seattle to Dallas.

I lucked out, because:

Despite SeaTac being insanely busy, it took 18 minutes from the moment the door opened on the Tokyo flight till I was at my American Airlines departure gate, which is impressive when you consider I went through immigration, took a train, went through security, and then walked to the far end of the terminal.

So I ended up having way more than enough time in Seattle. I guess I should have booked a connection with negative time. 😉

How I kicked someone out of their first class seat

I was confirmed in first class on the Seattle to Dallas flight, and I had a mobile boarding pass.

Everything appeared completely normal. As I went to board the plane, the boarding pass reader beeped and showed a red light, rather than the typical green light you get when you’re cleared to board.

“Hmmm, it looks like you had a seat change. Can you step over here and see my colleague?”

So I stepped over, and showed her my boarding pass.

“You’re in… 6A?”
“Yes.”
“Uh oh. For whatever reason our system shows you as having not checked in.”
“That’s really strange. I checked in as usual, and as you can see I have a mobile boarding pass.”
“I’m really sorry, I have no clue how that happened. Just be patient with me, I’ll fix this.”

The first class cabin was full at this point (with two people having received gate upgrades), and all 16 passengers had even boarded. 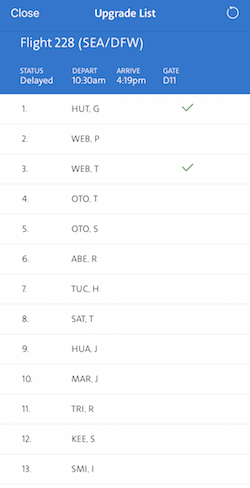 “Well thanks for your help, I appreciate it. And I’m sorry, this must be awkward for you.”

I waited at the podium, and she disappeared onto the plane for about 10 minutes. I’m sure people have the potential to get very annoyed and embarrassed in situations like that, so I wouldn’t want to be the gate agent who has to go onboard and reassign two people to worse seats.

She returned just a few minutes before boarding wrapped up, thanked me for my patience, and told me I could proceed to seat 6B (not my initial 6A, but I wasn’t about to complain!).

It’s worth noting that number one on the upgrade list was downgraded, and not number three. I’m sure there was a reason for it, but that surprised me at first glance. 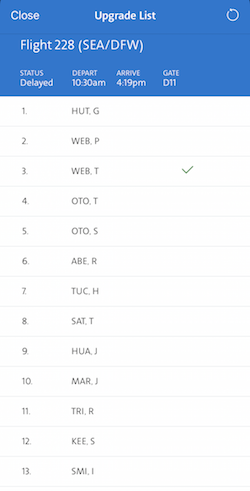 I’m not sure what exactly happened here, but suffice to say that it was a first for me.

I’m still not sure what exactly happened here. I assume it was some sort of tech glitch, but who knows.

I also feel bad for the guy who got downgraded, but that also seemed like the fair thing to do in this situation.

Has anyone ever faced an onboard downgrade before?

Share
Tweet
Conversations (143)
The comments on this page have not been provided, reviewed, approved or otherwise endorsed by any advertiser, and it is not an advertiser's responsibility to ensure posts and/or questions are answered.
Write a comment
Cancel reply
Report a Comment
Thanks for letting us know!

Submitting...
Featured Comments
View all comments (143)
Write a comment
Most helpful comments ( as chosen by the OMAAT community ).

The other person wasn’t down graded for you! They received the upgrade at the gate because you weren’t there yet and the seat was available. Rightfully so you should receive the seat you paid for once you arrive

Interesting to note that #2 and #3 were likely a couple which is why #3 got the upgrade over 2. Makes it even odder that #1 got the downgrade. Perhaps a special occasion #1 overheard at the gate? Bizarre though. Thanks for sharing.

Reminds me of this comedy bit by Jim Jefferies: https://youtu.be/N5SdzElE58k