Ultimately this will likely surprise exactly no one, but that won’t stop me from sharing…

My dad doesn’t have Global Entry, so we intentionally planned a long layover in Dallas for him, since immigration times can vary wildly, and he also gets nervous with short connections.

Fortunately everything was quick this time around. So I tried to make a same day confirmed change for him (which costs $75, and seemed well worth it to have him get home shortly after 9PM rather than after 12AM). Unfortunately the website wasn’t allowing it, because with this change he’d be downgrading from first class to economy.

There was exactly one confirmable seat left for a same day confirmed change, and as luck would have it there was an American Airlines counter nearby. The counter was marked as “self-service,” but that was the only counter around, and there were two American gate agents sitting behind the counter.

“Hi, could you help my dad with a confirmed same day change?”
“You have to use the kiosk.” 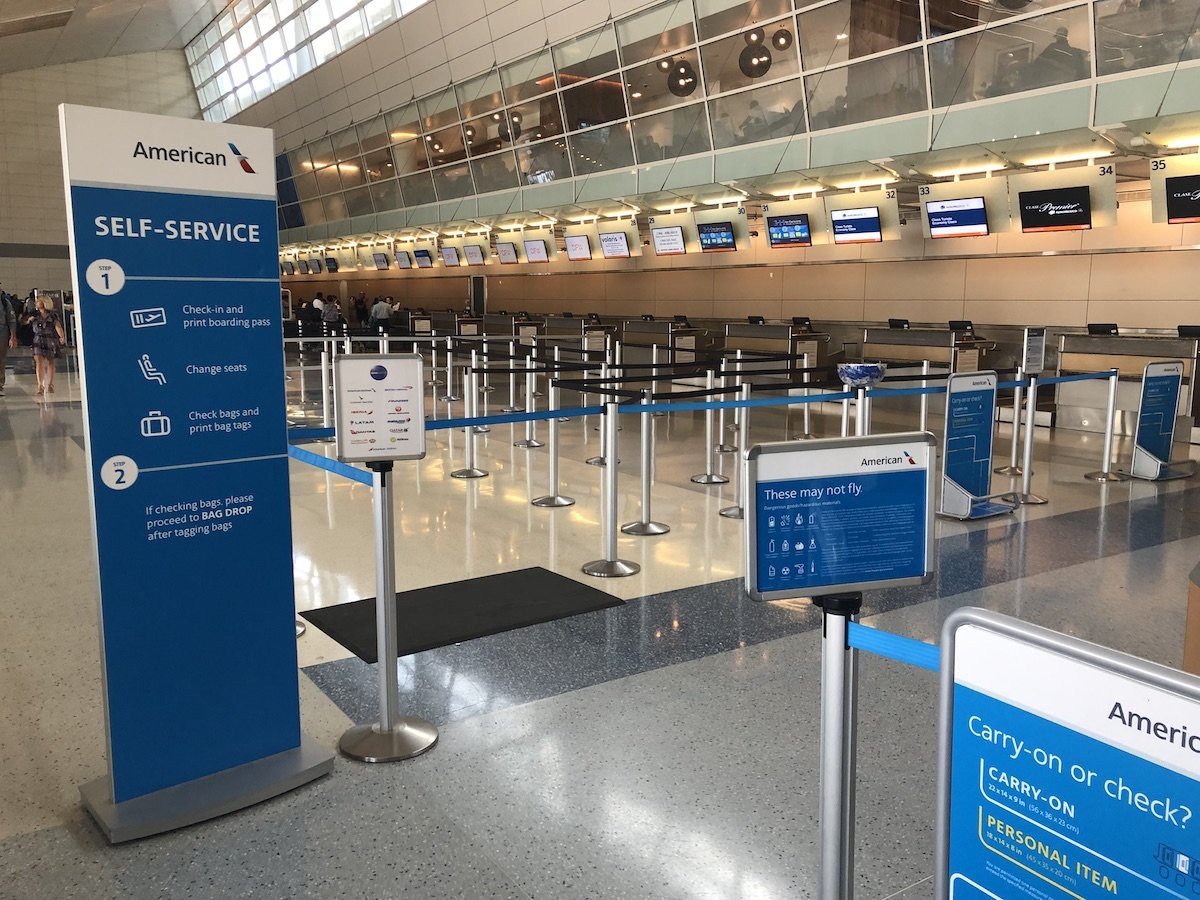 So I used the kiosk, and the kiosk said to see agent.

“I tried to use a kiosk but it said to see an agent, so could you please help?”
“You’ll have to go to the full service ticket counter.”
“Okay, where is that?”
“It’s about a five minute walk in the other direction.”

Let me note at this point that if you’re going to have separate counters like this, maybe don’t put them a five minute walk apart?

“Is there any chance you could help, since I tried to use the kiosk and you’re the closest agent? We’ve had a long travel day, and I’ll I’m trying to do is get my dad home at 9PM rather than after midnight after traveling for almost 48 hours. There’s only one seat left that can be confirmed, and I’m scared it will disappear.”
“You’ll have to go to the full service desk, we can’t accept payment here.”
“Can’t you try at least? It’s not like there are any other customers waiting.”
“American Airlines doesn’t want us to help. That’s what the full service counter is for.”

Usually I’d just walk off at this point, but I decided to (politely) push on further. Let me be clear that these employees weren’t rude at all, which is more than I can say about a lot of American employees. They were just indifferent and work for a company that doesn’t have a culture of customer service.

“I know this isn’t your fault and is part of an overall problem with the airline. But surely you also understand my frustration. I’m an Executive Platinum, my dad is a million miler, we’re both in first class, and we’re just hoping for help with a simple change. And you’re telling me that the company doesn’t want you to help us. How would you feel if you were a loyal customer to a company and that’s how you were treated?”

I wasn’t expecting anything, but rather figured I’d just feel better getting that off my chest. Much to my surprise at this point she agreed to try to help. Not only that, but you’ll be shocked to hear that these employees actually can accept payment, unlike what I was told.

So while it took a while, she did eventually help with the change… and this perfectly sums up what is so darn annoying about flying American.

During the 10 minutes it took to try and process the change, a couple of other customers walked up to the other employee sitting there, and the answer was simply “you’ll have to go to the full service desk.” One of those customers responded with “but why can’t you help?” Exactly…

American Has A Culture Of “No”

If American can fix their reliability problems, then their single biggest issue is their toxic culture. American Airlines simply doesn’t have a culture of taking care of their customers. Why? On the most basic level it’s because employees aren’t at all aligned with the mission of the company, because the company doesn’t have one.

This is why it’s so darn refreshing to fly with Delta. While every company has bad apples, by and large Delta employees go out of their way to take care of customers. They have a culture of “yes,” and if there is a problem they try to find a solution. They appreciate their customers at every step of the journey.

At American I consistently feel like employees are inconvenienced by my presence, especially their employees working on the ground.

Share
Tweet
Conversations (235)
The comments on this page have not been provided, reviewed, approved or otherwise endorsed by any advertiser, and it is not an advertiser's responsibility to ensure posts and/or questions are answered.
Write a comment
Cancel reply
Report a Comment
Thanks for letting us know!

Submitting...
Featured Comments
View all comments (235)
Write a comment
Most helpful comments ( as chosen by the OMAAT community ).

I couldn't agree more They do not care about the customer, or your status with the airline It feels like I'm flying on frontier, the seat might be a little bit more comfortable Their processes are senseless When I have called for help I have been shocked I've been disconnected because I got the wring department, instead of transfered I have been hung up on not once but rather multiple times Using miles earned is a joke

What in the world are you doing? American Airlines as the rest of the airlines, is struggling at these difficult times. This publication was posted almost a year ago. There is no need for this antagonism and hatred directed to AA not the time or reason for it. They are a vital and definitely an important part of the Airline Industry as a whole. They provide employment to hundreds of thousands of people all over the world, directly and indirectly. Let's support them and help them to stay at float not entice the public to avoid flying their planes. What happened to you and your father, was not even done by American Airlines employees, but sub contractors, that sometimes are not capable of doing certain functions strictly reserved for direct and active capable and efficient American Airlines representatives, thank you.

I avoid this airline like the plague for many of the reasons stated above . They just aren’t nice. I used to fly a lot til recently and flew them maybe 10 times in 5 years. With every single time , I flew them, if there was a problem, the employees did nothing to solve my problem. One time in Philly, I remember having a close connection due to another delayed flight , I arrived at the correct terminal, after a shuttle ride to the correct terminal and a long run , I arrived at the gate . No one was there except for two gate agents I asked them where is flight number. They looked at me, like I was speaking a foreign language. Thinking because I was out of breath , I repeated it again . They snorted and laughed and said ,It’s not here.” And they continued their talk . Watching me start to seethe they said, “check the overhead. “ I was so mad, I say” yes the overhead says this gate , before I could say “And this is why I hate your airline, I’m a customer and this is the help I get .” A very nice maintenance man working nearby told me , he thought the flight had been moved down 4 gates . I was so thankful to him, I thanked him like crazy, and as I turned to go , I saw the gate agents staring at daggers at him, like he shouldn’t have stepped in. I never forgot that one incident . I was not rude , only a weary , harried traveler , trying to find my gate. Now if I have to fly, and all my frequent flyer airlines a Delta , United or Southwest aren’t gonna work, I’ll go Jet Blue, Spirit or Allegiant before American . I think in all the times on that airline I had a polite flight attendant once and that was because I was traveling with a grandchild , they smiled at him, as he was well behaved. They do not need to fawn over me, just a hello and thank you for flying with us like all the other airlines do, would be sufficient. They can’t do it, so I’m done.