It’s sad to see the direction Alaska Airlines is taking, though I guess it’s not surprising.

Alaska Airlines used to be truly differentiated in terms of the passenger experience they offered. While other airlines focused on basic economy and generating as much revenue through fees as possible, Alaska focused on customer service, including customer-friendly policies.

That’s slowly changing. I guess it was inevitable, though I imagine Alaska’s takeover of Virgin America, and their general struggling stock price, is contributing to this.

For example, recently Alaska Airlines increased their change and cancelation fees, and announced that they plan to introduce new “saver fares” sometime in the not too distant future, which sounds a whole lot like basic economy.

In the meantime it looks like Alaska is chipping away at their customer friendly policies one-by-one.

For tickets issued as of September 1, 2018, Alaska Airlines will be discontinuing their guaranteed airfare credit. Essentially Alaska Airlines has had a policy of issuing a credit in the event that you book a flight and your fare drops. 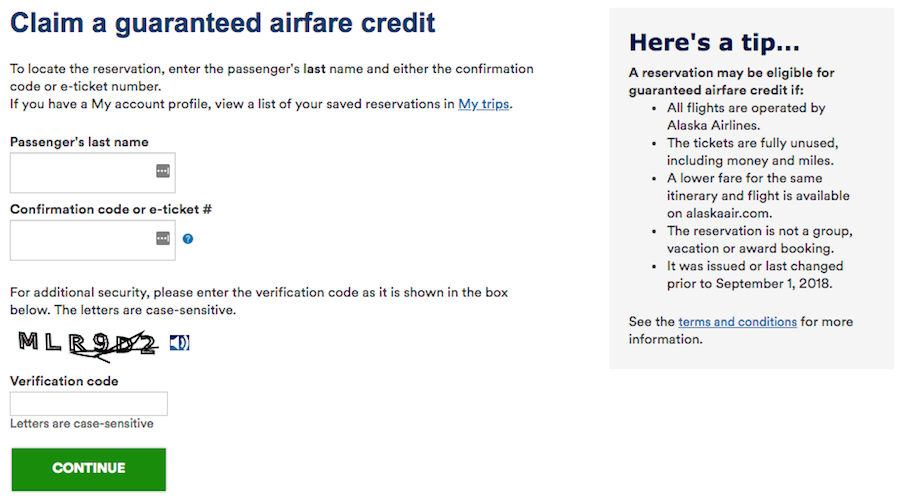 When you think about it, it’s a smart business practice. It puts people at ease booking their ticket in advance, knowing that they’ll get a credit if the price drops. On top of that, Alaska is only issuing a credit, and that credit will encourage someone to book their next ticket on Alaska as well.

But that policy will be discontinued as of September 1. Alaska Mileage Plan MVP Gold members continue to be entitled to free ticket changes, so those customers would be able to cancel and rebook, though that’s still an extra step compared to just being given a credit for the fare difference.

JetBlue used to have a similar policy of price matching when ticket prices drop, but they discontinued that feature in late 2017.

Now Southwest Airlines is the only remaining US carrier to offer a price guarantee for their flights.

I just tried to get a fare recalculated after a fare dropped. Surprise there is no low price guarantee anymore as of September 1, 2018. For non-elites that was a huge benefit and now I will most certainly book away from Alaska and more towards Delta and Southwest in order to get the best fares. I don’t see the harm in having a credit issued for future travel. What was once exceptional customer service is now lacking. Sad to say.

Also, Alaska is still offering free status matches to customers from other airlines to all of their levels (including Gold75). So someone who is, say a platinum on AA, can get Gold 75 status for free, and hop over ALL the MVP's and Golds, who have remained loyal to AS for many, many years. That's just an outward slap in the face to all of the customers who have remained loyal to the program all this time. No wonder why the upgrade lists are more and more becoming 30 people deep for an already inferior first class experience. At the very least, they should have an upper tier that no one can challenge into, but is earned - like we all have. I'm PDX based, and it's now making more sense to go to Delta - it's less expensive, and is global.

As a counter to my last post (Sept. 8th), let me say that -- in all fairness -- Alaska is NOT dropping like a stone...rather, it seems to me that AS finds themselves in the same position that nearly every corporation finds itself in following the takeover/purchase/merger of another company -- the so-called "synergy" that's predicted always runs into problems due to the former paying too much for the latter; the timetable is always delayed, as it takes longer than the overly optimistic promises that were made; etc., etc., etc. It's not "dropping like a stone," so much as it's flying through what the pilot describes as a "light chop" when turning on the Fasten Seat Belt sign at 38,000 feet. It may be a little bumpy from time to time, but you're still flying towards your ultimate destination... So (for example) the price match guarantee falls by the wayside on the one hand. On the other, 9x out of my last 10 flights on AS, dating back to May of this year, I've been upgraded to F -- either at the gate or, more typically, via an email 12-24+ hours before my flight. (And I keep forgetting to use my upgrade certificates!) The same holds true for my wife when we're flying together. Also, the food has gotten significantly better on AS metal, coming much closer to what VX was serving than pre-merger AS.