Between California’s tragic wildfires and the Northeast’s impending snowstorm, it’s shaping up to be a week of extremes – and a rough one for travelers.

In the Northeast, people are bracing for the first snowstorm of the season, with Winter Storm Avery already starting to wreak havoc from the Ohio Valley to the Appalachians Mountains.

The storm is likely to bring a mix of snow and ice, which should make for a rough commute, and could be extra-problematic in areas where the trees haven’t lost all of their leaves yet.

Meanwhile, California’s tragic wildfires continue to rage on. According to CBS News, The Woolsey Fire has torn across close to 100,000 acres near Los Angeles, while Butte County’s Camp Fire has taken over 10,000 buildings and 56 lives across 138,000 acres.

While the fires are starting to be contained, air quality has been impacted across much of the state. Even four hours and one mountain range away, I was able to see the smoke from the Camp Fire in Santa Cruz earlier this week. And much of California continues to see this weather warning: 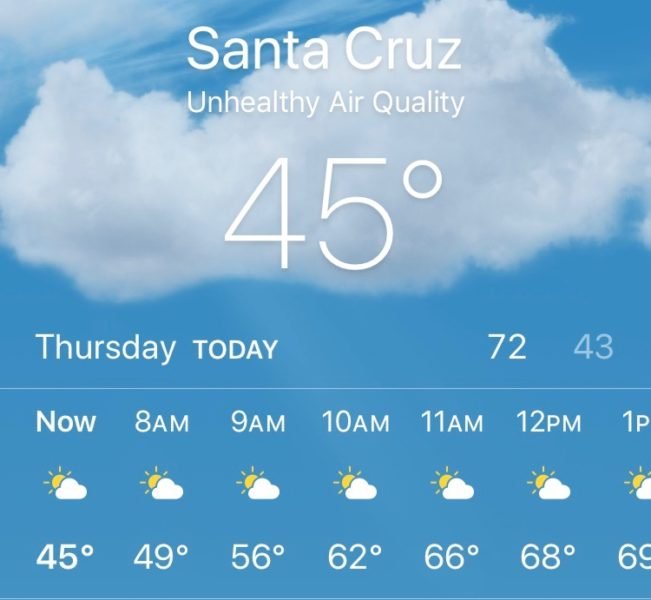 So while this isn’t a “typical” storm warning in the traditional sense, visibility has been severely impacted.

While air travel across the west coast seems to be (mostly) up and running, albeit with some delays, the Northeast is starting to see the predictable slew of delayed and canceled flights. Most airlines have issued some sort of travel waiver, allowing passengers to change or rebook their flight at no additional cost.

Waivers for the fires were posted earlier this week and are still very much up and running, and most of the major airlines have issued waivers for Winter Storm Avery as well.

Regardless of the current status, here is where you can find the latest travel advisories for the following airlines, and where they stand at the time of publishing:

As always, these are subject to change based on the severity or scope of the storms. For example, as of last night American Airlines had not yet issued a travel waiver for Winter Storm Avery, but they added a pretty comprehensive one this morning. So if you don’t see your airline or airport of choice in here, keep checking back as the forecast changes.

Even with top-tier status, phone queues can sometimes take hours, and multiple weather advisories just compound the issue. If ever there was a time to be creative, it’s when hundreds of thousands of people are reaching out to the airline call centers at the same time.

Below is a list of tips that Tiffany put together that could help you avoid hours in the phone queue (or worse, a night at the airport!)

Don’t leave this until the day of travel, but if the situation changes and you’re already at the airport, start with the lounge agents. They tend to have fewer passengers to deal with than the gate agents, and thus may have more time (and more patience), when it comes to rebooking your flight. The exception is Alaska, as due to contractual reasons their lounge agents literally can’t help with flight reservations.

These cards will often cover your hotel, or potentially even the cost of a new flight, and so forth, so it’s good to know both the benefits and the requirements to file a claim.

Any time that there are weather delays, the best thing that you can do is to be as proactive as possible. Track your flight as soon as you can, change it online if you can, and pay attention to the small nuances, like connecting cities or inbound flights.

If you’re traveling up and down the east coast, alternate modes of transportation, like Amtrak or (four wheel drive) rental cars may also present more viable options than air travel. Just be sure to keep an eye on the train schedules, and be really careful if you do decide to drive.

All that is to say that the more flexible you are, and the more you can keep your cool, the more likely you are to get to where you need to go – and hopefully avoid a dreaded night at the airport.

Is anyone impacted by these weather delays? What’s your plan this week?

P.S. If you’re looking for a way to help those who are impacted by the wildfires in California, consider looking at the California Community Foundation Wildfire Relief Fund, or the American Red Cross, both of which are providing on-the-ground help for the victims of the fires.

@wxguy and @Cellphone - Well, you learn something new every day! I'll keep it in mind for future posts.

@wxguy: Well said. As TWC is not an official source of weather info, other companies are under no obligation to use the names that TWC has conjured up by itself for these non-tropical storms, and using these names could even lead people to get complacent when there's an actual named tropical storm from a "boy who cried so wolf" effect. I hereby also politely request that OMAAT please stop using these unofficial non-tropical storm names in the future.

@wxguy are you okay man? is this next level trolling? that's truly the most ridiculous thing I've ever read and wish I could get that 30 seconds of my life back remember, by law, we can say and do what we want. you should not perpetuate the stifling of free speech, whether by government or individuals. there is exactly ZERO chance anybody is confused as to the difference between Winter Storm Avery in the east and the hellish fires, let's call them Hades, in the west