I get meal vouchers relatively frequently from United for overnight delays, but rarely have the chance to use them for a meal. That’s typically because my flight is either at 5AM, which makes it too early to buy breakfast, or because I’m about to hop on a flight that has a meal service, so I’m not really interested in chowing down a 2,000 calorie airport meal.

There are a few other ideas, though, which will prevent the vouchers from going to waste. If you’re in a good mood, consider going to Dunkin Donuts and getting donuts for the crew. Otherwise danishes and muffins from Starbucks sound good too. They’ll appreciate it.

My favorite, however, are the biscottis from Starbucks. They’re great for keeping in your bag during your travels, either to give to the crew (and they won’t give you a weird look since they’re packaged) or to enjoy with a cup of coffee aboard. Worst case scenario, if you get stuck on an RJ for hours, it’s not a bad snack option either.

Here’s what I picked up with my $15 meal voucher this afternoon, much to the amusement of everyone in line at Starbucks: 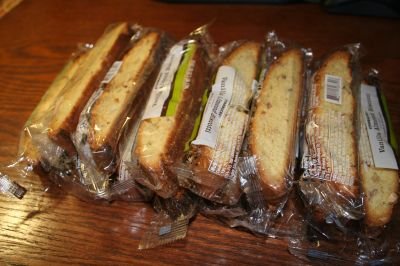 Ben what great idea! Thanks for the tip.

I often give them away to someone if I can't use it...more than likely, an attractive female. Hahha.