I can’t even begin to say how ridiculous I feel writing a blog post about cookies. I mean, is there anything less substantive I could write about? Fine, maybe hot nuts are equally unimportant, though that doesn’t stop me from obsessing over them.

Anyway, United serves cookies in domestic first class for dessert, and apparently they have switched their contract to Poppie’s, which will be providing United with a million cookies and 500,000 scones per year for all of their domestic flights.

On my flight this evening I noticed the different presentation of the cookies: 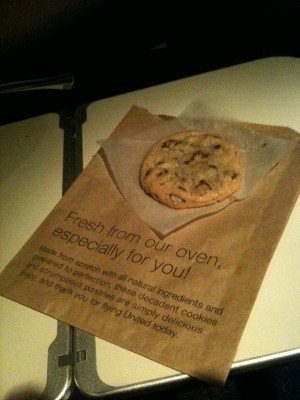 I felt like I was checking into a Doubletree hotel! In all honesty, serving the cookies in bags is so much more practical than the old way of serving them on cocktail napkins. As far as the cookies go, I’m convinced they’re the same as before; they tasted identical, at least.

The real reason I’m making a post about this, though, is because I expected an advertisement on the bag. I mean, it would make sense if the bag were promoting Poppie’s for a couple of reasons. First of all, because as mentioned in the press release, Poppie’s isn’t very well known among consumers, so it could help build their business and probably result in United getting a better price. Second of all, it could be another way for United to promote that they’re working with “local suppliers,” or something like that. Instead, the excellent purser, Mike, went around asking each passenger if they wanted “a cookie made of all natural ingredients.”

On a related note, I think United is absolutely crazy for not selling warm cookies aboard. They could make an absolute killing selling those. When confined to a metal tube, who can resist the smell of cookies baking in the oven?

IAD-LAX flt 925, cookies served right after dinner on napkins with milk served in the wine glasses ! ended up having 2 since most of the cabin was asleep

In F from IAD-DEN, warm cookies immediately after the meal service.. I just kinda miss the milk being served with it :).. Agreed with tony.. if you want warm cookies in Y.. well pay for them!

As someone who has flown 30+ segments [not all cookie-eligible, of course] in the last ~2 weeks, I only recall one NOT served on a drink napkin. I assumed the brown bag was used because I'd slept through the actual meal time and was served much later, but apparently not. And I have to agree the cookies look and taste the same.