The 747 has long been the queen of the skies. It’s one of the most majestic aircraft of all time and is so iconic that most people can identify it at a glance, even if they’ve never flown on one. United has operated the Boeing 747 since 1970 and currently has 22 of them in their fleet.

The end of the road is near for these old birds, however. United announced a while ago that they were not part of their long term plans and wouldn’t be getting the new Polaris seats. They first said they’d phase them out in 2018, but that recently got moved up to the second half of this year.

And now we might know what the final flights will be.

The Final Flights Of The United 747

Here is their final schedule, per Routes Online:

In each case, the plane will turn around to San Francisco right away. With the date change, that means the final flight of a United 747 is currently scheduled to depart Seoul Incheon for San Francisco on October 29, 2017.

If you want to fly the final flight, you pretty much have your choice of seats. There aren’t any saver awards available, however. (Though there was 1K inventory for saver economy earlier this week, shortly after the schedule became public.) 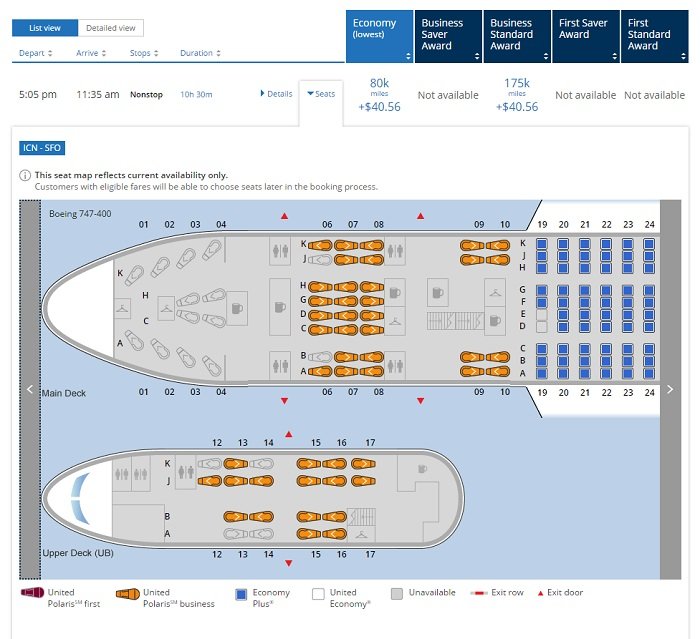 I’m not sure why the first class seats all show occupied. Maybe Scott and Oscar are blocking the cabin for their own private party?

United 747 — Love Them Or Loathe Them

I have mixed feelings about the end of the 747 era at United.

It’s easily both my favorite and least favorite plane in the United fleet and perhaps the only one that I’ve flown in all three cabins. I love flying in the upper deck business class cabin which feels like flying private, or at least what I imagine flying private must feel like. We’ve also enjoyed flying in the pointy end of the plane where the first class cabin is located.

But the economy cabin on the United 747 is basically miserable.

Economy Plus always seems like it has about an inch or so less legroom as compared to other United planes. And then there was the decision to remove the overhead movie projector and replace it with…. nothing. I realize most adults have some sort of device capable of streaming these days, but that isn’t always the case for kids. And even if they do, it’s nice to watch it on a bigger screen and maybe play some different games they don’t have at home. Of course, none of that is the fault of the plane per se, but rather the way it was configured.

So flying it is a mixed bag. Gazing it at from the terminal on the other hand is something I’ll never get tired of….. 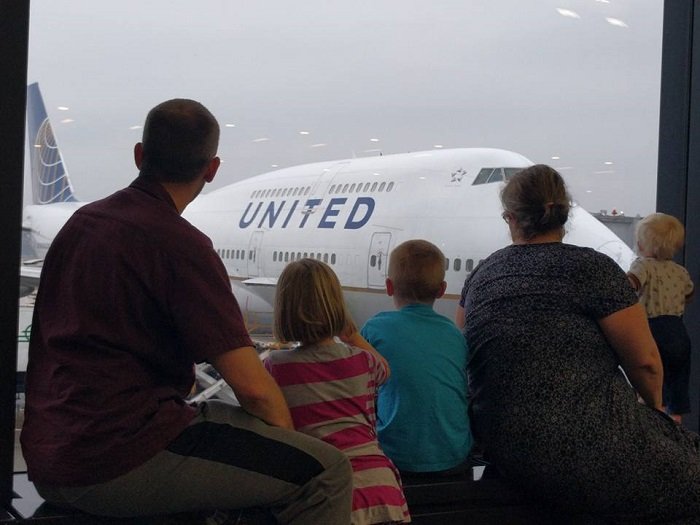 We think we now know the final schedule for United’s 747s. I don’t plan to be on any of these flights, but I did parlay a recent schedule change into one last opportunity for our family to fly business class on the 747 one last time.

Hopefully that will let me wish it farewell on a positive note.

Anyone planning to take the final United 747 flight this October?

Flying for 60 years I'd like to add some early experience to flying the original 747's. My first trip on one was in July of 1970 flying Pan American JFK-London. Back then the flight attendants could not do enough for you, full meals and pre arrival snacks were served (free) (their names were sewn on their aprons so you knew who they were) and the coach cabin itself roomy. If one looks back at the configuration of those aircraft, in coach seating was "2-4-3" not the "3-4-3" of today. Made a big difference! Large movie screens were located throughout the cabin. Headsets were proved and there were several channels of music available. Pan Am called theirs "Theater in the Air" and noted it was Bell and Howell equipment. They also distributed post cards with a picture of their "coach" cabin as well as flyers with movie info, etc. Playing cards, games for children (and wing pin's), magazines, newspapers and Pan Am timetables and information were available if one wanted it. During the 70's and into the 80's I also flew TWA's 747's many times to Europe (a few in First Class; Royal Ambassador and they called it) and the upper deck was a lounge NOT seating. There was a standup bar up there and light food service was offered if you wanted something. In the coach cabin they actually handled you a menu and one could choose an entree for dinner (was a choice of 2 or 3 as I recall, all at no charge, except for alcoholic beverages). If a plane was late they would announce drinks with the captain's compliments. United, as many domestic carriers in the early 70's actually removed seats from the coach cabin and installed lounges (Yes folks in coach!!). American called their 747's Luxury Liners and advertised the "best coach lounge in the sky". Imagine such a thing today! Given the current cramped fleets ,mediocre food, lackluster service and fees galore hardly a comparison to "back then". Oh by the way, security "then" consisted of showing your boarding pass; period!

I am booked to fly SFO-SEL on Oct. 28. I didn't know at the time that it would be the last scheduled outbound flight of a United 747, but I am happy to fly the Queen one more time. I have happy memories of flying first class on a TWA 747 from JFK to Athens, and upper deck business class on a United 747 from Sydney to SFO.