Yesterday I wrote a post entitled “Apparently Being A Douchebag *Can* Score You An Upgrade!”

It was about my Delta flight from Los Angeles to London on Friday, whereby someone was trying every trick in the book to get upgraded… and it worked… somehow! 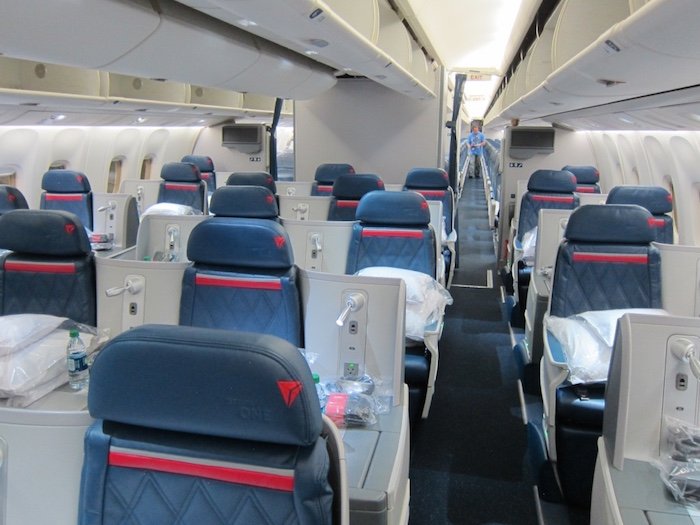 As I explained, it started at the gate when he took out his Delta Platinum Medallion card, a “Job Well Done” certificate (which can be used to recognize employees who go above and beyond), and his boarding pass for a Comfort+ seat. With a complete $hit-grin on his face, he said to the gate agent “so, how do I exchange these for seat 9A?” Clearly he had done his research, because that was a business class seat that was still showing as unoccupied on the seatmap.

Anyway, I won’t rehash it all here, so check out the previous post to see the entire series of events.

Well you got my story *mostly* right. But you did make one erroneous assumption. The gate agent actually *did* come onto the plane, back to C+ section, and handed me this upgraded boarding pass:

Yes, I did originally smile and grovel. But I’m guessing that in the end, they probably had some standbys to accommodate, and I may very well have been handed that new boarding card even if I’d been totally silent. I’m not sure. I’m actually curious about that myself.

Interesting situation, and thanks for chiming in! Rather than trying to hide the comment, I think it’s actually worth drawing attention to.

First of all, it seems like I was wrong on one front, in that I was watching pretty closely and never saw the gate agent come aboard to bring the new boarding pass. So I’m sorry about that. Clearly the guy didn’t upgrade himself, but rather his methods actually worked quite well! And kudos to the level-headed approach he’s taking in commenting here.

I do want to be clear about one thing, as I think it may have sounded otherwise when I wrote the first post. I do think there are ways to increase your odds of getting an operational upgrade. I don’t think there’s anything wrong with:

So while I don’t typically use any of the above techniques nowadays, I see the merit to them, and think they don’t cross any lines.

In my opinion it slightly crosses the line when you approach the gate agent with a bribe the second you get to the counter. But maybe I’m off base there, because it worked for Mr. 9A. Now, we’ll never know if that was the reason for the upgrade or something else, but ultimately he was the one who scored the upgrade for free, so he deserves credit for that.

I’m still not sure that actually modifies my conclusion/the title of the previous post, though. 😉

-1. The guy's still a douchebag. Bribing the employee is tacky, puts the employee in a bad position, and possibly threatens the employee's job. Now, if the guy wanted to file a compliment/JWD form afterwards, fine, but to present it beforehand is just wrong.

After reading the Rolling Stone article, the whole "douchebag" thing is like calling the kettle black. Because someone does something similar to things you have done in the past, requires that person to be labeled? Goes back to "I did it for the experience".....time to grow up and take responsibility for your words. Bloggers want to say they are part of the "media", then act responsibly! Otherwise you are overpaid, over-entitled wanna-bes!

This article is very interesting. As a "delta kid" of a delta airlines retiree, i understand that upgrades on domestic and international flights are never free. If you want a business seat, you have to pay the difference between coach/business seat. On an international/domestic flight, the cost of a business seat is extraordinary. A passenger can pay the difference at ticket counter and money is NEVER exchanged at the gate. Please know the rules and never put an employees job at risk because YOU want to sit in the front without paying! Delta one seats are for full fare paying passengers, employees/retirees. If you want an upgrade in business class, you pay the difference. Free is gone!!