Reminder: In connection with my trip to New York for the Tribeca Film Festival I’m giving away 25,000 SPG points through Twitter. See this post for full details on how to win. Also, in the interest of full disclosure my lodging and transportation were paid for by the Starwood American Express for this trip.

I ran into my idol, Johnny Jet, at JFK, and we shared a cab to the Sheraton Tribeca.

Everyone has their favorite area of New York, and Tribeca is certainly becoming one of the more trendy areas. I can’t say it’s my favorite part of the city just yet, but it certainly has a completely different “feel” than midtown or the Financial District (where I usually stay), and was very convenient for the theater at which the Tribeca Film Festival screening would take place that night. 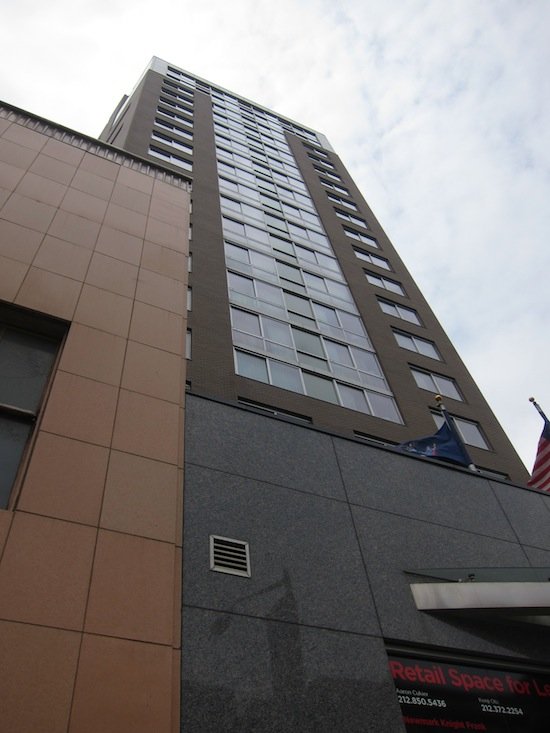 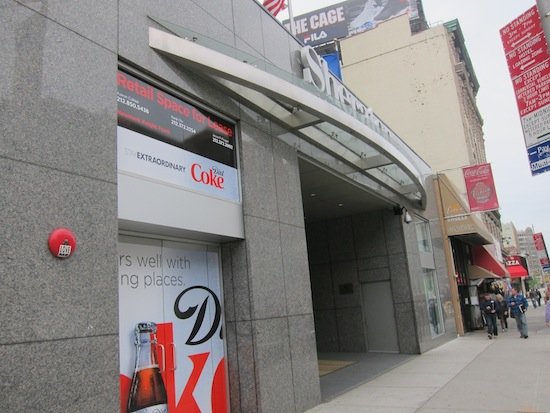 The hotel only opened a couple of years ago so still has a pretty “fresh” feel to it. The agent at check-in was efficient and polite, and I presented my SPG Platinum card, a credit card, and ID. It occurred to me that I hadn’t previously added my SPG number to the reservation, so while I was already pre-assigned a room he also programmed my keys for access to the club lounge. 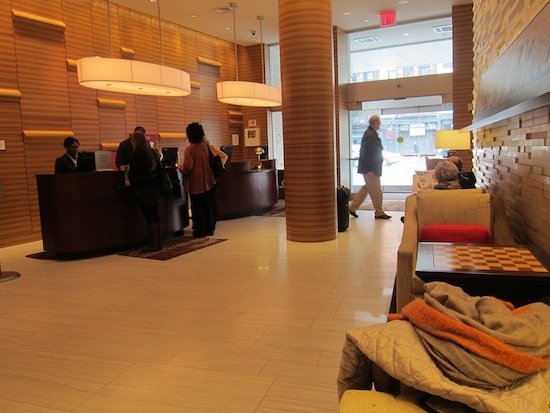 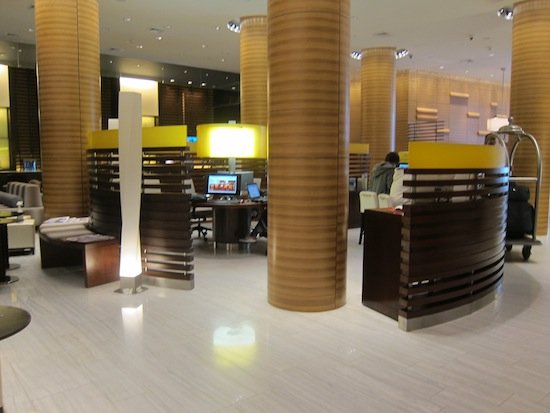 [email protected] in the lobby

I was assigned a room on the 17th floor so headed for the elevators, which require keys for access. 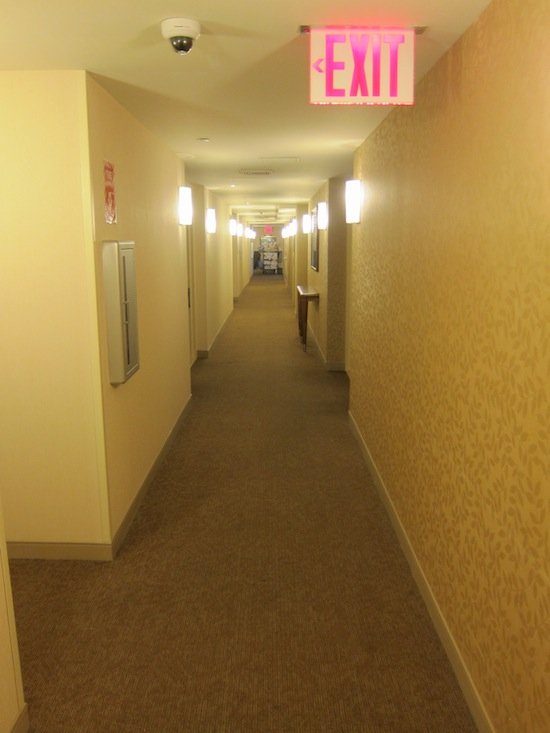 The room was definitely on the small side though had a “fresh” feel to it and was nicely furnished. It featured one of Sheraton’s signature “Sweet Sleeper” beds, which I’m starting to like as much as the Westin Heavenly Bed. 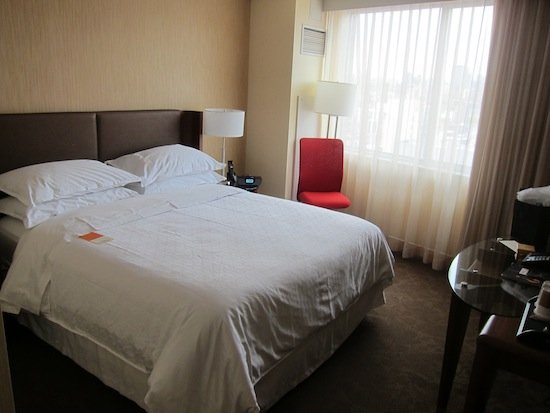 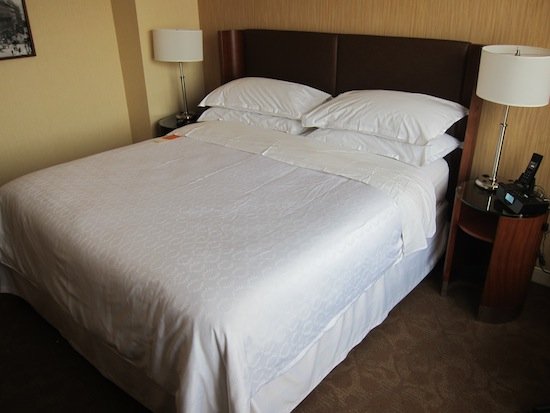 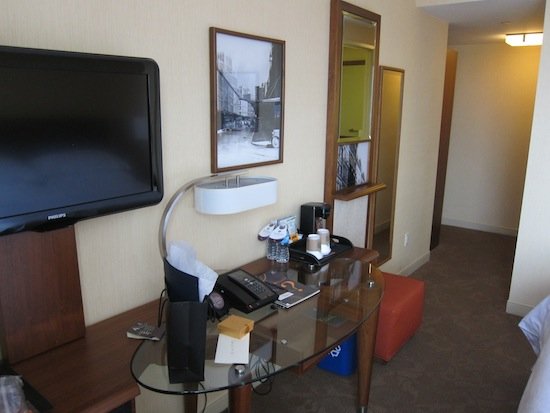 One of the things I do love about Tribeca are the great views of the city if you’re on a high enough floor, since most buildings in the immediate area aren’t high rises. 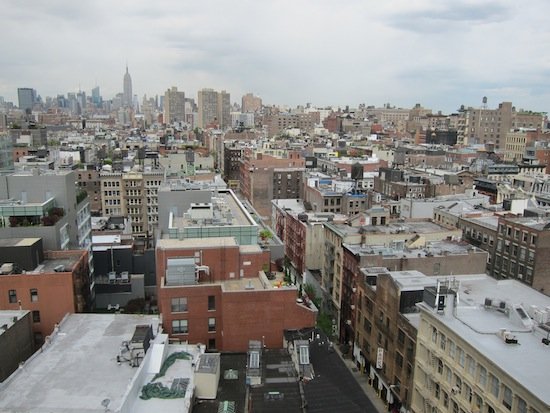 The bathroom was a good size and featured a walk-in shower, toilet, and sink, with Sheraton branded toiletries. 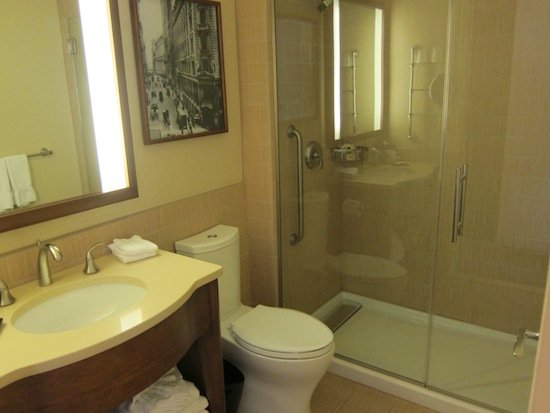 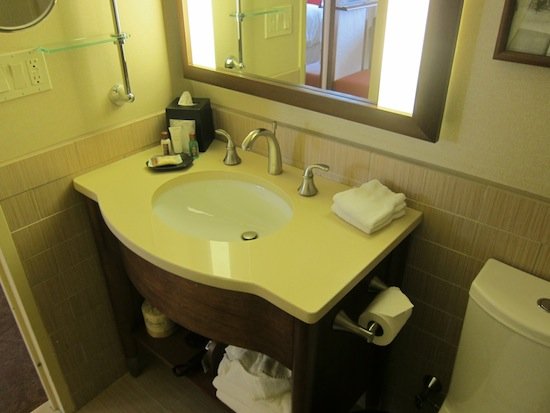 As a Platinum member I had access to the club lounge, which is located on the 16th floor. It was a nice area with high-top seating, tables, and couches for lounging. While I never made it to the lounge for breakfast, the evening spread consisted of fruit, cheese, crackers, and two hot options (like spring rolls, chicken wings, etc.). Service was very attentive, and the attendant seemed to be pretty familiar with most of the guests, so it seemed like they were regulars. 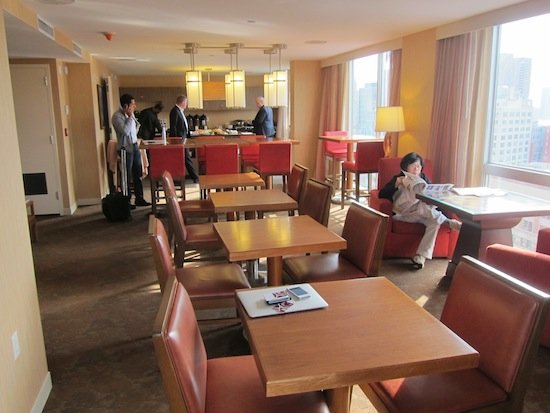 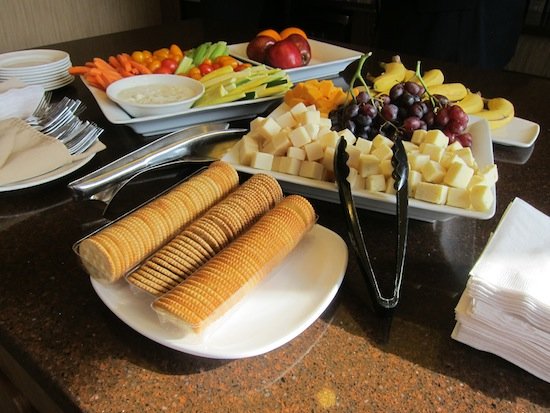 Part of the evening spread

The highlight of the club lounge had to be the stunning terrace overlooking the city. It’s funny because I feel like people overlook the simplest things some time. The weather was beautiful, the temperature perfect, and the terrace had one of the nicest views of the city I’ve seen from anywhere. So I spent quite a bit of time out there. 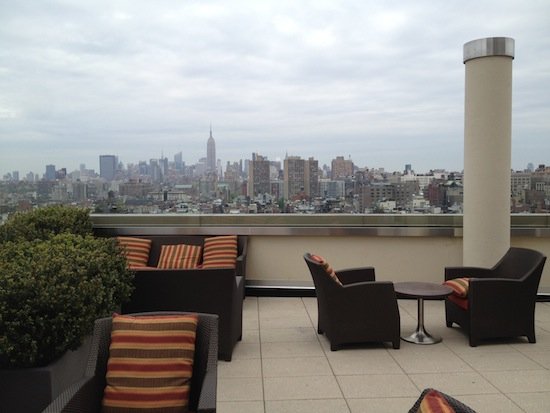 On the whole I quite liked the property. Let me be clear, there are higher end and more premium SPG hotels in the City, including the St. Regis and the Chatwal, but they come at a price. From a value perspective it’s tough to beat the Sheraton Tribeca given that it’s a category five property, making it as few as 12,000 SPG points per night (with the fifth night free). There aren’t many cities with higher hotel rates than New York, so I would recommend this hotel to anyone that wants to be in the Tribeca area.

I stayed here with my mom over the weekend. The hotel was lovely, staff were friendly, location was nice. UNTIL.... Sunday evening we dropped off our shopping bags after a long day of shopping to head to dinner. To our dismay, when return our Bloomingdales bag with my mom's dress and shoes for my brother's wedding was MISSING! Gone. Vanished from our room! We went to speak to the manager, Colin, immediately. He reviewed the video and entry to our room. He confirmed that over the day housekeeping had been in 3 times. THREE. Using 2 different keys. Two of these times were while we were at dinner. He reviewed the surveillance video and only saw them leaving with bags of towels and sheets... as if they couldn't have hid it inside. He bought himself time by saying he would chat with the maid the following day (at this point it was 1:30AM and we have a flight to catch the next day). We waited around all morning for him to confront the mail... hadn't heard anything... we eventually touched base with Colin when he said he would **maybe** file an insurance claim if we had the receipts. We gathered our information and went back to chat. At that time, he came off as insulting and patronizing. Basically said "sorry you can't prove it" and dismissed our claim. He said he would file a claim with the insurance- but we got the feeling nothing was going to come from this. He completely knew we had to catch a flight back to Canada and took complete advantage that we were powerless and didn't have time to file a police report. End of the day, we have no confirmation of any insurance claim being filed by Colin, a half-a$$ apology and hours wasted trying to convince this man of our story. We came to the Sheraton Tribeca to enjoy our stay in NYC as we went dress shopping for the wedding and now not only are we dress-less, we're out the money spent on the STOLEN dress. Please, if you have the courage to stay here after reading this HORROR STORY, lock your things up. They'll take what they can get their paws on and won't compensate for it.

I live literally immediately across the street from this hotel - so close that you can't even see my building from the rooftop shot in the post because it's blocked by the lip of the roof deck. It's an interesting location because Canal Street creates a sort of noisy, rough-around-the-edges chasm directly between high rent soho and tribeca. I can understand people first checking in to the property to be a little underwhelmed, with all the truck and bus traffic and bootleg DVD salesmen. Having said that, it is an incredibly convenient location (and that's why it's so close to so many trendier hotels - the soho grand, the james, and the tribeca grand are all just about a block away, and within a 5 block radius you've also got 60 Thompson, the Mercer Hotel, and too many others to count). You're a very, very short walk away from some of the best shopping and restaurants in the city, and you're near express stops on every useful subway line. An earlier commenter said the location is more like Chinatown - I don't think that's entirely accurate. While Chinese owners run many of the shops immediately on canal even this far west, you're really not particularly near the central Chinatown restaurant / shopping corridors - you'd have to go halfway across the island to the east to get there, though it'd get progressively more "Chinatownish" the further east you went from the hotel. My big concern with staying here would be the noise - our apartment gets pretty loud at a few key moments during the day: early in the morning (5-6ish) when there tends to be heavy truck traffic, during the evening "rush" (which varies from very short on Mondays-Wednesdays to more or less all afternoon and well into the night on weekends). The rooms in the front probably have the best view but unless you're on a high floor and they've done a good job with the soundproofing I'd think asking for the sides or back if you're not a deep sleeper. I obviously can't comment on the property itself because I have no reason to stay there :)

I had always thought the Heavenly Bed, Sweet Sleeper, Four Comfort, usw. were all the same mattress. 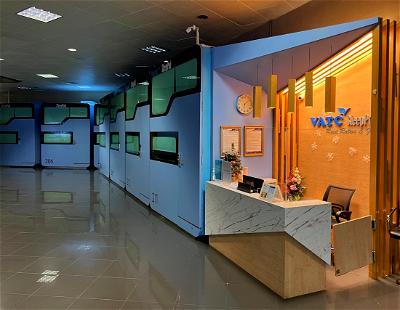 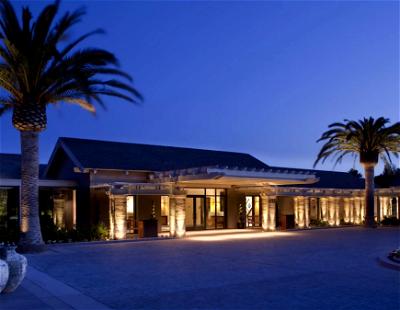 7
Which Hotel Programs Let You Earn Points For Multiple Rooms?