Late last week I had a quick overnight in Seattle (had a flight arriving at 10PM and flight leaving the next morning at 11AM), so instead of staying at one of the crappy airport hotels decided to head into the city. I have about a dozen “Big Welcome Back” promotional nights through Hyatt’s amazing promotion, so decided to try out the Hyatt at Olive 8. Last time I stayed at the Grand Hyatt Seattle (comprehensive review here), which I really liked, so I figured it was worth trying this one out so that I could compare the two.

The exterior is sleek and the building is huge, though only the lower floors of the building are the hotel, while the higher floors are condominiums. 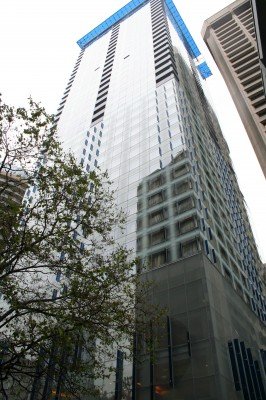 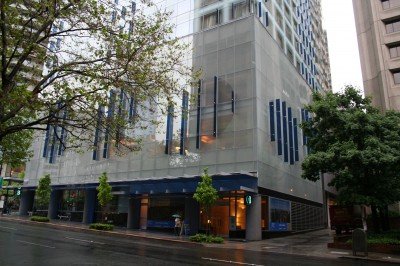 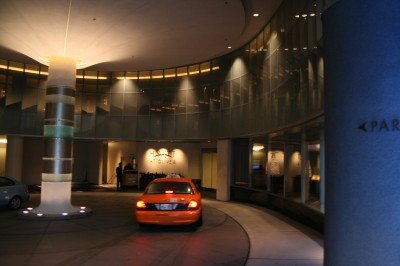 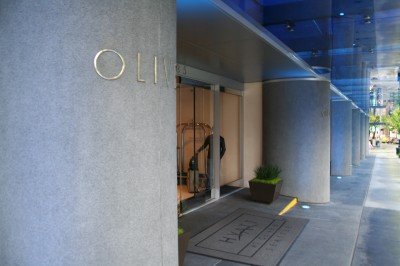 The lobby was quite modern. Probably not as impressive as the Grand Hyatt Seattle, but I’m not going to sit here and argue the merits of their respective interior design techniques.

At check-in I had to wait for about three minutes, at which point I was helped by an agent. She apologized for the wait and cheerily checked me in within about two minutes. She explained that I would receive free internet and breakfast in the restaurant as a Diamond member. I was surprised she didn’t name an amount, but I wasn’t going to ask. She didn’t mention anything about the Diamond welcome amenity, so I brought it up and she offered 1,000 points or “the amenity,” without mentioning what it was. I went with the 1,000 points since I was tired and would have probably chosen it either way. I was directed to the elevators and headed up to my room. 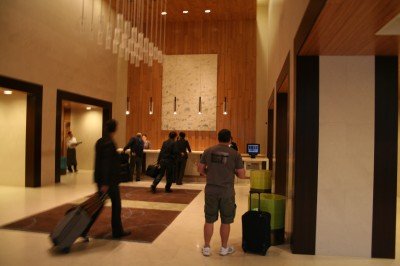 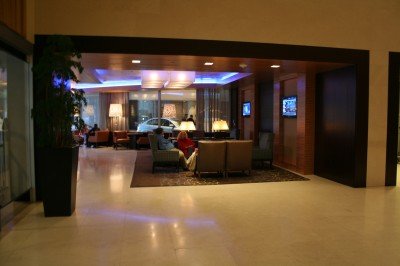 I proceeded to my room, which was on a high floor. The elevators and corridor were all quite modern, which isn’t surprising given the type of hotel this is and that it’s new. 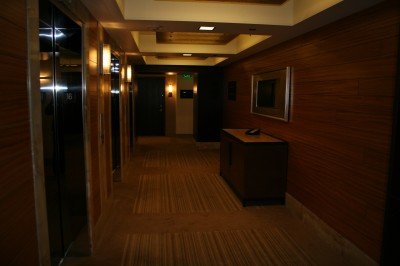 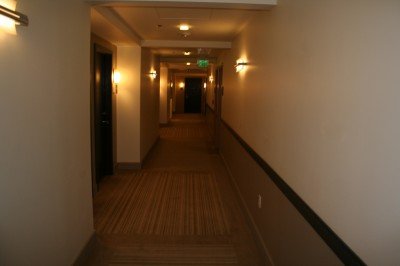 Unlike the Grand Hyatt I didn’t get a suite upgrade for free (not that I was expecting one), and actually don’t think I received any sort of substantial upgrade. Nonetheless the room was very nicely appointed, with a king sized bed, chair, desk, and large bathroom. 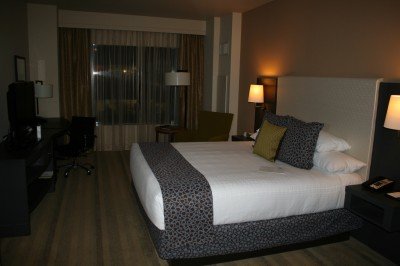 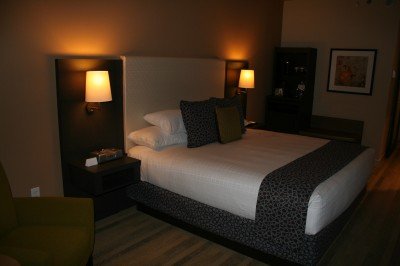 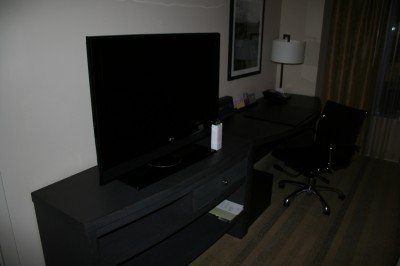 The room had plenty of outlets, which, surprisingly enough, always seems to be an issue for me at Hyatt properties.

The view from the room wasn’t all that great, and doesn’t in any way compete with the view I had of the bay at the Grand Hyatt. 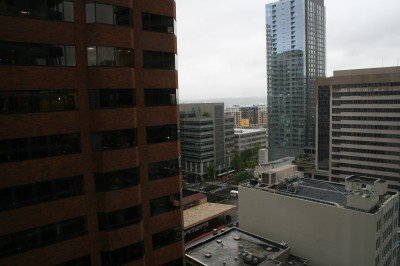 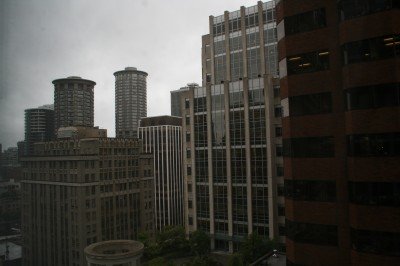 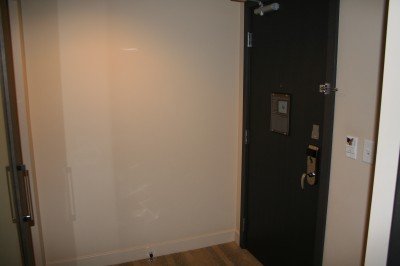 As I mentioned, the bathroom was a decent size and had a large walk-in shower. Unfortunately the water pressure sucked. On the plus side, the handle to adjust the temperature and turn on the water was located on the opposite end of the shower as the shower head. Very smart, given the glass partition. Seems obvious enough, but so many hotels get that wrong. 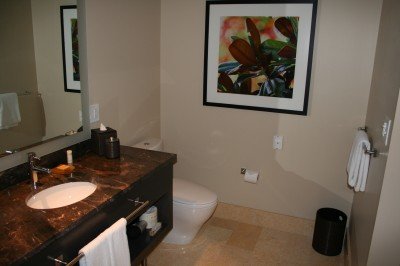 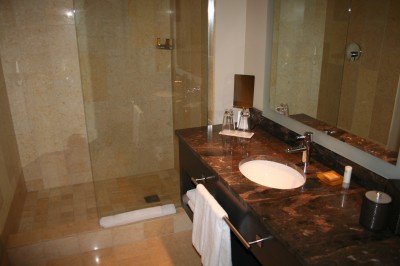 The hotel offers Portico amenities. Bleh! The only thing that has kind of grown on me is the bumpy soap, but the rest of the stuff still kind of sucks. Figured that this hotel would have something different given that they keep touting their environmental friendliness. Not that this isn’t environmentally friendly (or is, I don’t know), but I was expecting some sort of “earthy” bath amenities. 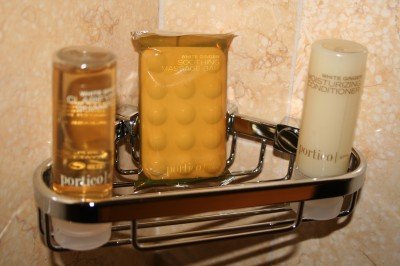 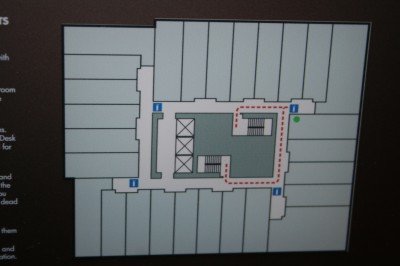 I slept relatively well and woke up at around 8AM for breakfast. The hotel restaurant, Urbane, is located next to the lobby and has a pretty decent menu. 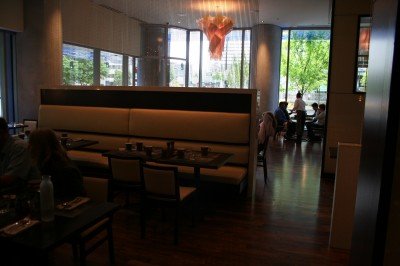 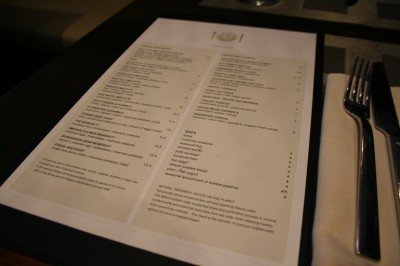 The yogurt parfait wasn’t particularly good (maybe it’s just that I don’t like plain yogurt), but the fruit was fresh and I’m told the omelet was tasty. Altogether the breakfast came out to about $40. 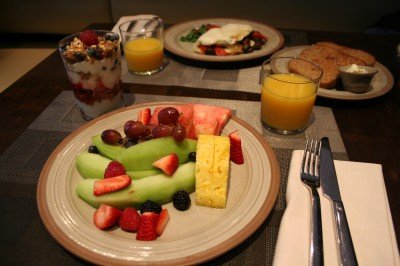 And while I didn’t get the chance to use the pool or gym, I briefly checked them out. They are located on the second floor. The gym is very nicely equipped and even has a yoga/aerobics room (or something like that). 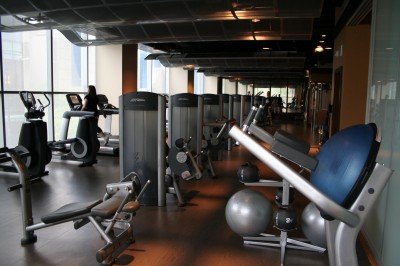 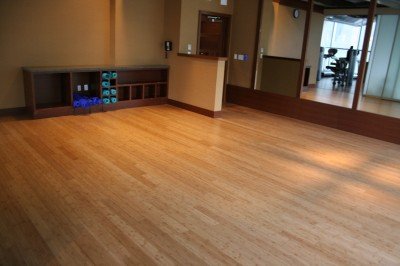 The pool is actually a lap pool, which is great, and there’s even a large hot tub. 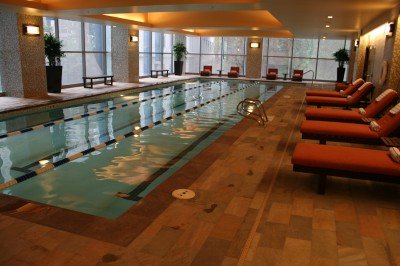 At check-out all the breakfast charges were removed from my bill and I was on my way back to the airport.

Overall I had a nice stay. I did prefer the Grand Hyatt, mainly because they seem to offer Diamond members free upgrades to suites when available. I’m also generally more of a fan of a club lounge than just free restaurant breakfast, though it worked out really well in this case, since I got to the hotel at a time the club lounge would have already been closed at the Grand Hyatt Seattle. The restaurant breakfast was really good, though.

I also really liked the pool at this hotel. So when I return to Seattle I’d probably stay at this hotel if I just had a one night stay and arrive late at night (thereby missing out on the evening spread in the club lounge at the Grand Hyatt Seattle), but would otherwise stay at the Grand Hyatt Seattle. Or even better I’d hotel hop daily, given that the hotels are only a couple blocks apart and I really do want that 1,000 point Diamond amenity bonus every day. 😉

@Darren Mak - How does that work? I've never gotten the 2500 point bonus for not having a RC. I recently stayed at the HR in Savannah and got free breakfast in their restaurant but was never offered the 2500 points for no club. Do I just call up HGP Diamond line?

Don't forget your 2500 point bonus for no club access!

Awesome trip report! I'm a fan of the bumpy soaps too. Downtown Wyndhams are good at having them on hand. And nice job maxing out the breakfast! I just became Hyatt Diamond so your site's reports from the field is very helpful in finding out what kind of experience I may have. Keep up the great work!