I’m not going to lie, traveling as a family with three kids five and under is a lot of work. Quite often it means not getting to use some of the airline or lounge amenities — like daybeds or even showers — that you otherwise would.

But once in a while there can also be real advantages to having five mouths to feed. Like being able to sample literally every dish on the United Polaris Lounge lunch and dinner menu.

As luck would have it, we had another opportunity to visit the United Polaris Lounge Chicago about a month after our Oslo trip. And this time, we got to experience the full sit-down dining experience.

So rather than doing a full review of the lounge, I’m going to focus exclusively on the a la carte dining experience. 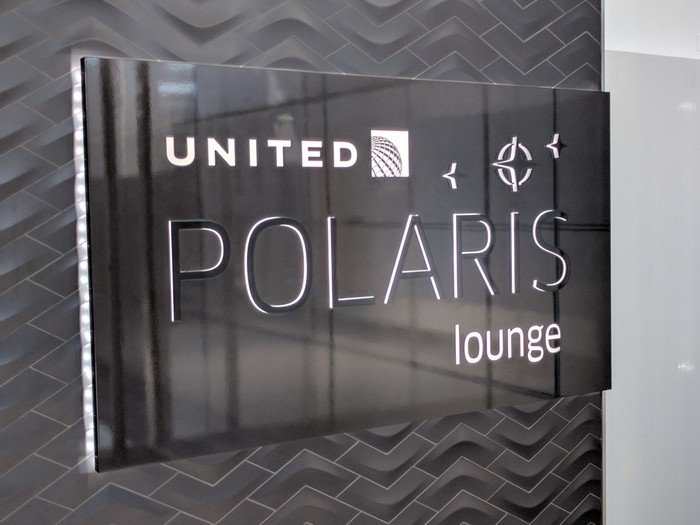 Arriving at the United Polaris Lounge

We had scheduled this trip with a very long layover because my wife had an important meeting in Europe the next day and we were going to be connecting in Chicago. In the winter. So we wanted to minimize our chances of not getting stuck as much as possible, even at the expense of an insanely long layover.

Of course, with the Polaris Lounge at your disposal, insanely long layovers aren’t necessarily a bad thing.

Our plan was to have lunch at the Polaris Lounge, then wander over to the Chicago Children’s Museum playplace inside O’Hare, and then come back to the lounge for dinner before boarding. That would, in theory, enable us to board the plane, and pretty much go to sleep immediately.

At any rate, we arrived at the lounge and were warmly welcomed, much as before. We soon found some seats and settled in. 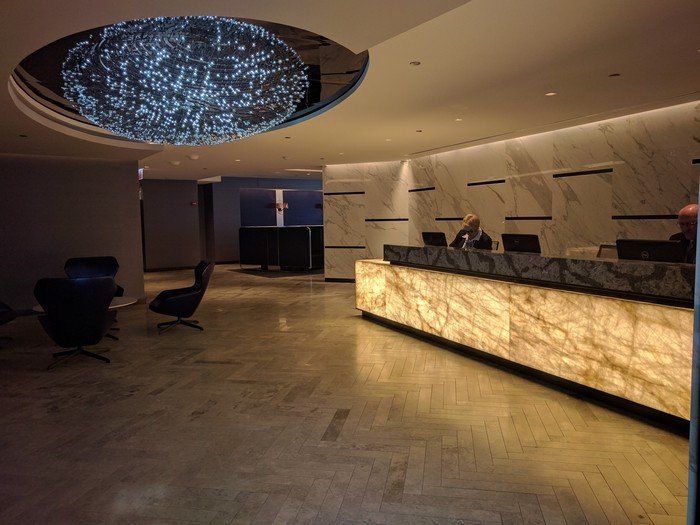 I wasn’t exactly sure how to go about getting a table. It would seem like maybe you should check in with a hostess, put your name on a list, or something official, but, at least according to one of the bartenders, you just plop down at one of the tables with a reserved placard on it.

That seems sort of counter-intuitive to me — personally, I would never just sit down at a table labeled reserved, as I would assume that it is, well, reserved already. But anyway, that’s what they told me to do.

There are currently six such tables to the right of the bar area and four in front. Each seats two, so roughly speaking, they can accommodate 20 guests. 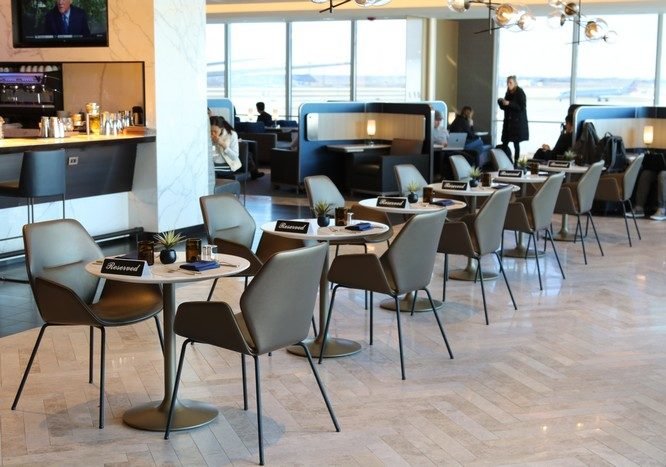 Since we needed a table for four (five with the littlest one), our server Erin happily pushed two tables together for us. We sat in front of the bar, which was nice as I don’t really like sitting in the middle of the room. And that was true even before I had kids. 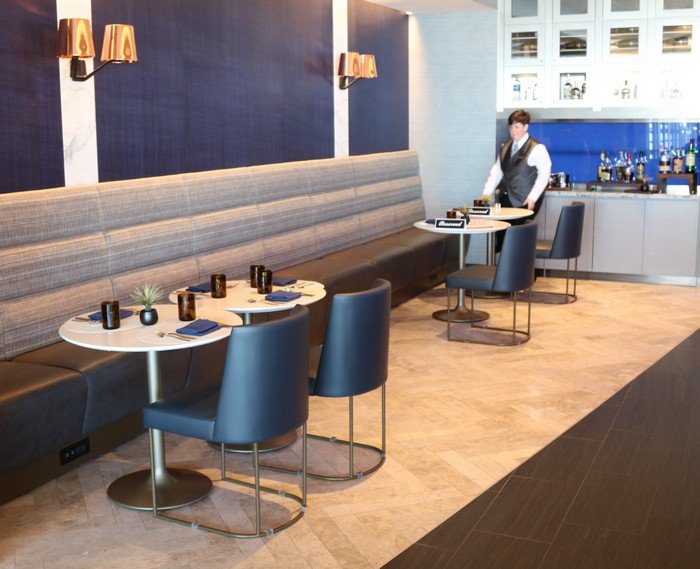 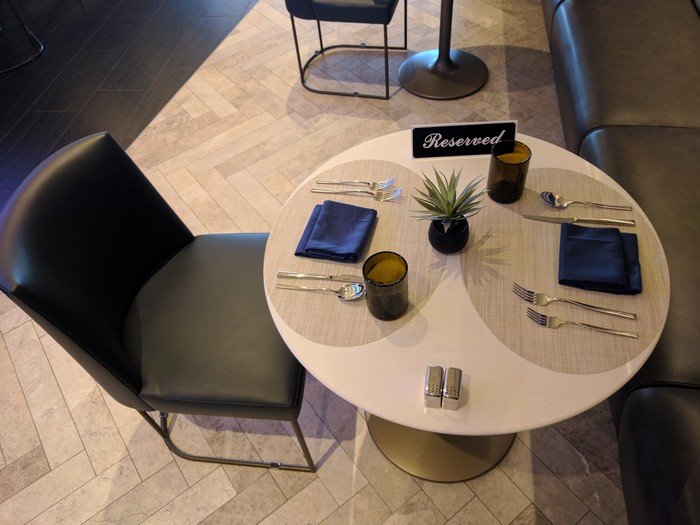 Erin soon presented us with the menu which consisted of two pages under a band on a wooden board. It had a classy feel to it. 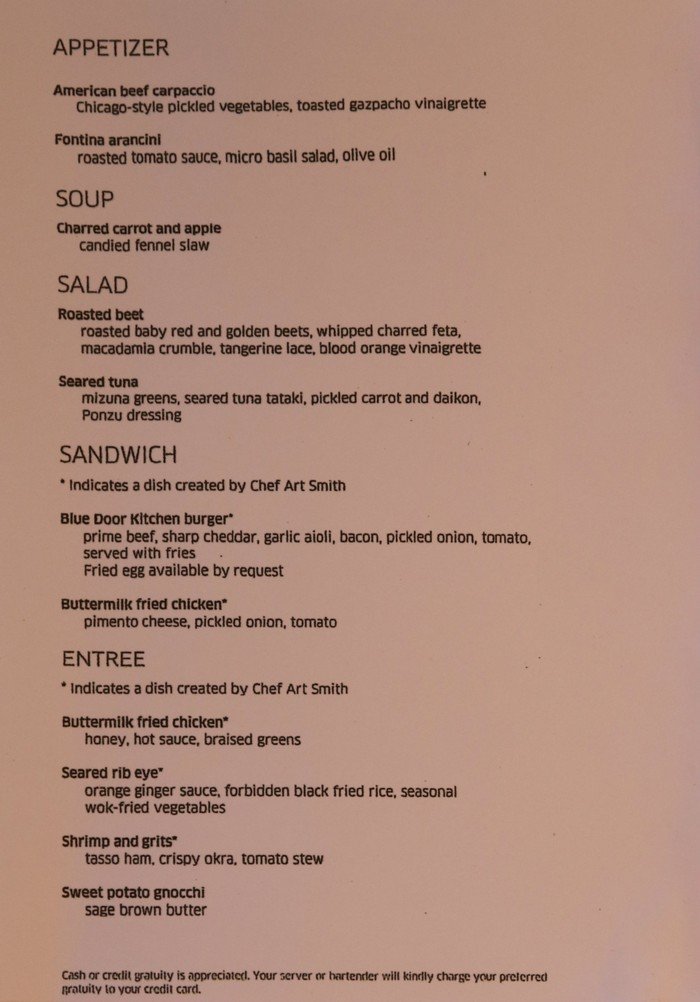 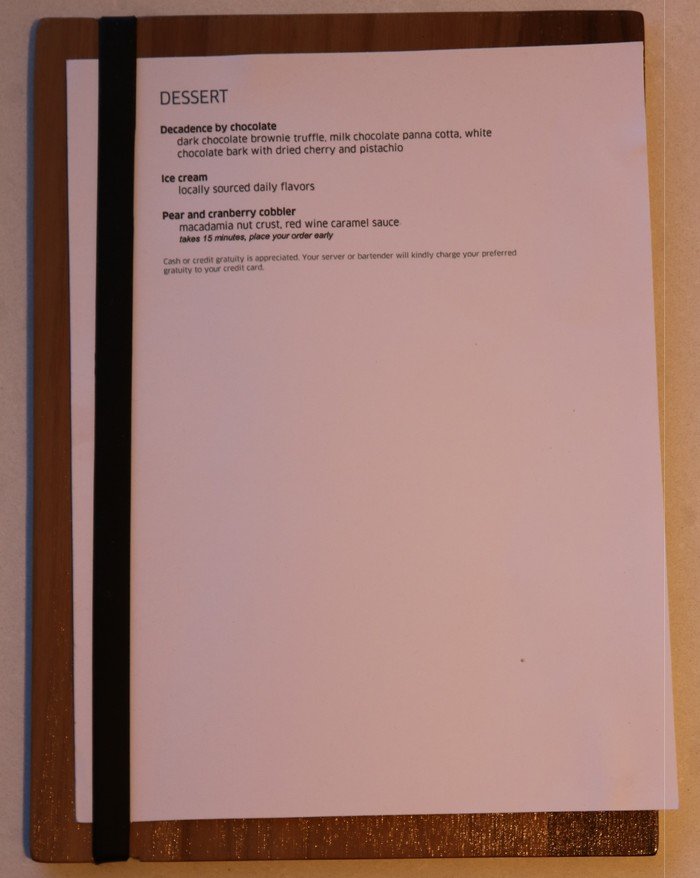 We placed our drink orders which mostly consisted of drinks you could get at the self-serve hydration station, but she happily got them for us. 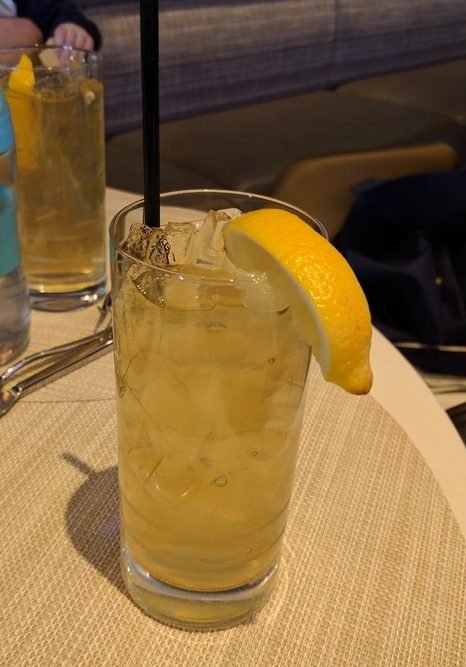 Like I said, we knew we were going to have both lunch and dinner at the lounge, so we strategically ordered such that we could cover the entire menu between both meals.

From here on, I’m not going to distinguish as to whether we had something for lunch or dinner, but rather cover the offerings in the order that they appear on the menu.

There are two appetizers on the menu. We ordered one of each, though Erin encouraged us to order more, warning that they are individually sized. We assured her that one of each would be sufficient for our family.

That said, they are indeed pretty small, so my advice would be to not plan on sharing.

The fontina arancini, for example, consisted of one arancino and a couple of crackers. 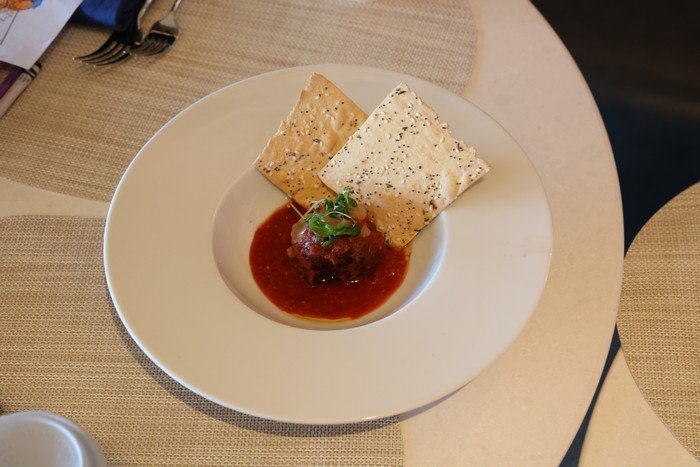 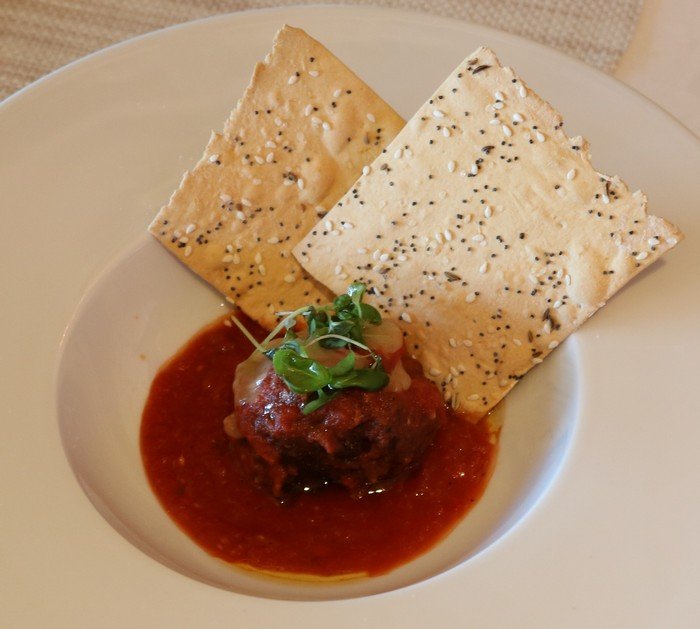 The American beef carpaccio was also quite good. 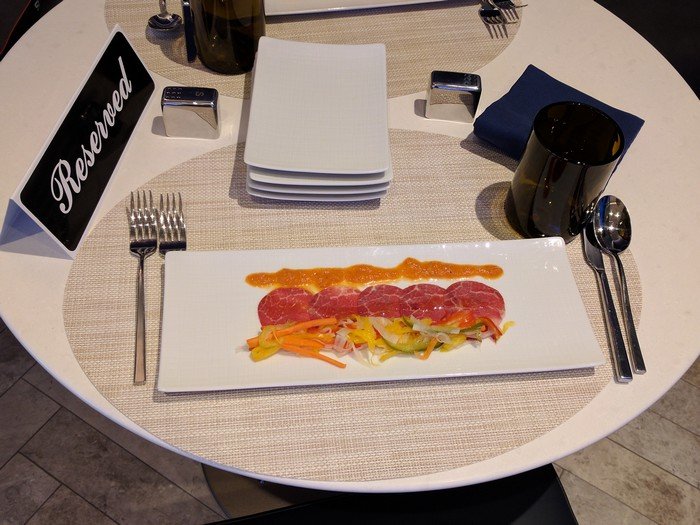 The soup was a charred carrot and apple with candied fennel slaw. The soup and slaw came separately and are combined at the table by your server, which made it feel a bit fancy. 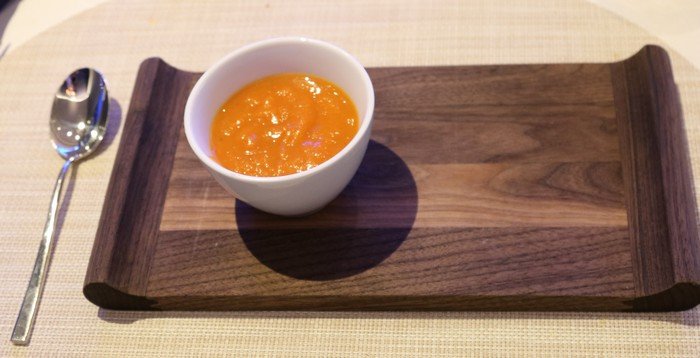 There are two salads on offer.

The roasted beet salad had both red and yellow beets, which made for a colorful dish. I’m not a big fan of beets, but my wife enjoyed it.

I thought the seared tuna was a little more interesting. I’m not sure that putting a small pile of microgreens in the middle of the plate qualifies it as a salad, but I’m definitely not complaining. 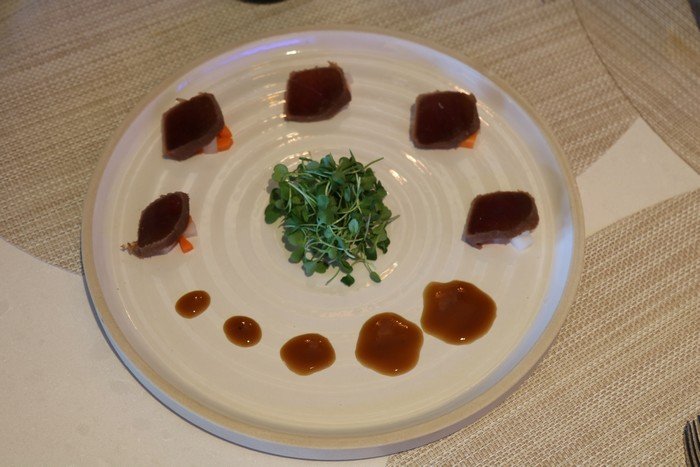 There are two sandwiches on the menu — a burger and a chicken sandwich. You might be inclined to skip right over these in favor of the entrees, but that could be a mistake, as the burger is actually quite impressive. It is (optionally) served with an egg on top.

The burger is also noteworthy for being sizable. While most of the other offerings are probably smaller than you might expect, the burger was actually just as big as its pub counterparts. It was also served with a generous portion of fries. Here it is with the egg. 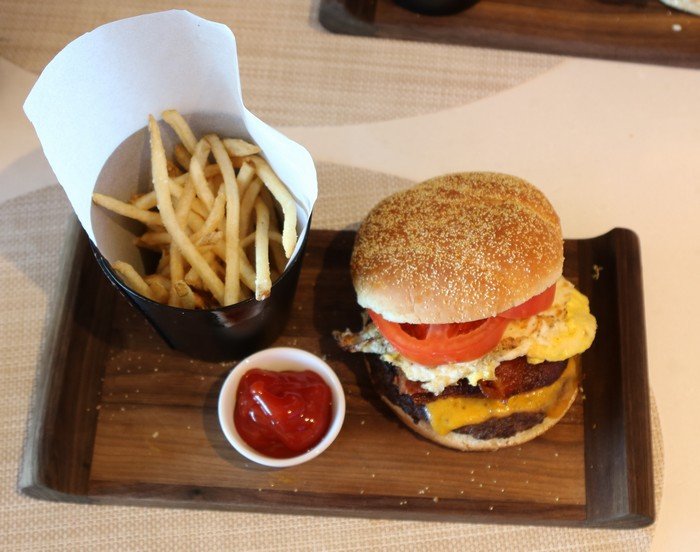 And without. (Hey, I promised the definitive guide to lunch and dinner at the Polaris Lounge, so it seemed only proper that we try it both ways.) 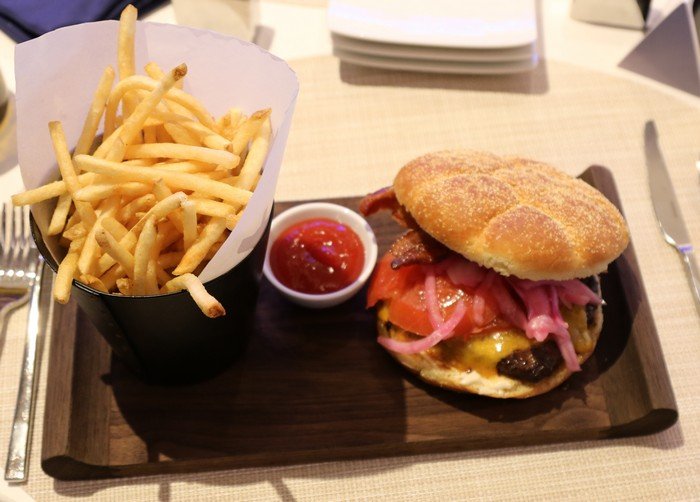 The fried chicken sandwich was also generously sized and came with the same fries. 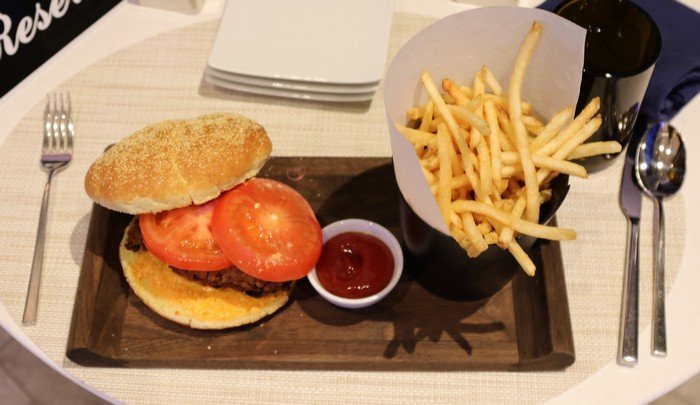 The Polaris Lounge has four entrees on the menu, one less choice than you’ll get on the plane.

The buttermilk fried chicken comes with two pieces which, unsurprisingly, tasted similar to the chicken sandwich. 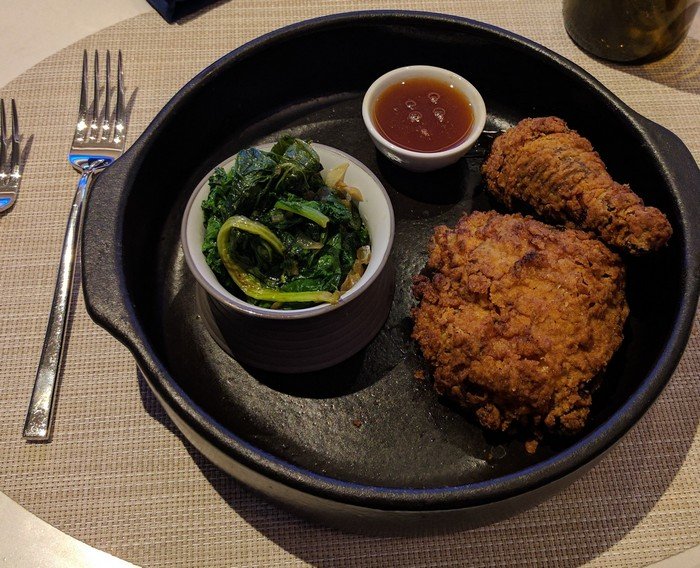 When I first saw a preview of the Polaris Lounge menu, I was most excited about the seared ribeye. I had visions of enjoying a big juicy perfectly-marbled steak, perhaps served with a baked potato with butter and sour cream.

Instead, the thought that went through my head as it was being served was, Where’s the beef? 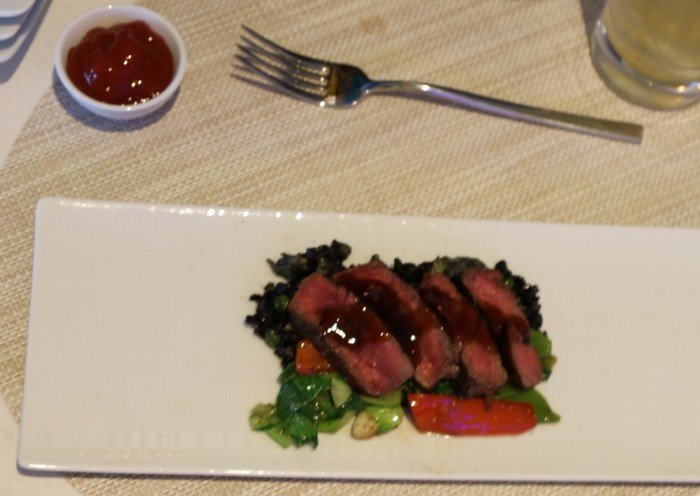 Now don’t get me wrong, it was a wonderful dish, it just wasn’t quite what I was expecting. Mostly I wish it was bigger.

And it seemed a bit more like a steak salad. 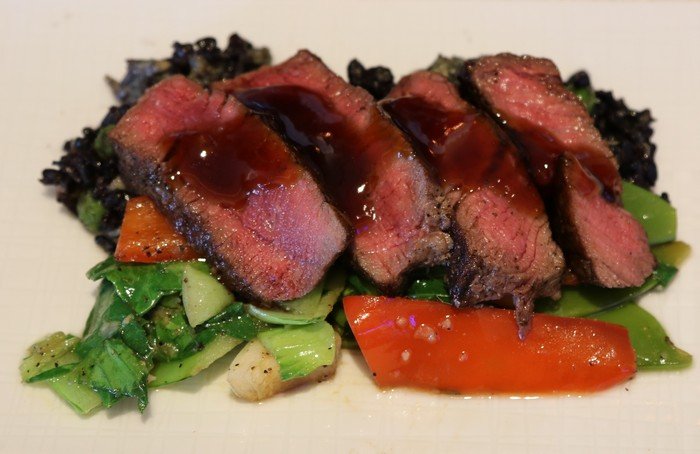 My family was probably the least excited about the shrimp and grits. Actually, I have trouble getting excited about anything to do with grits, but we gave it a shot. 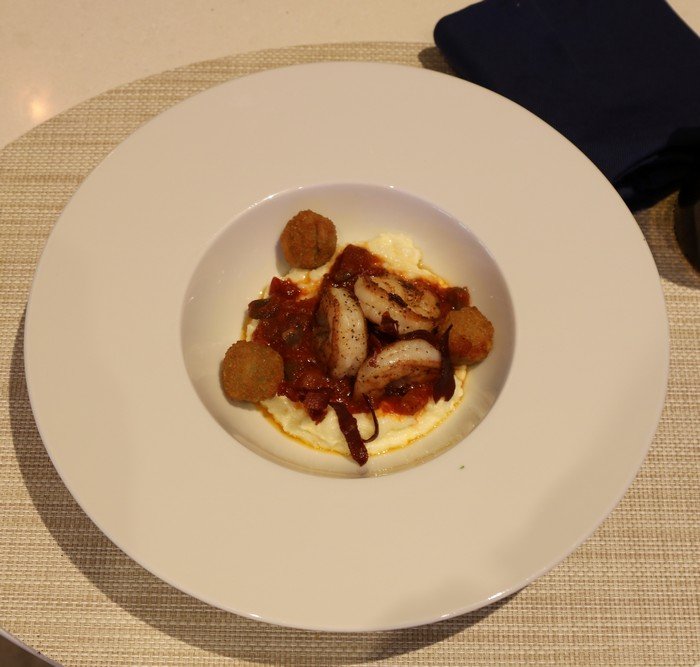 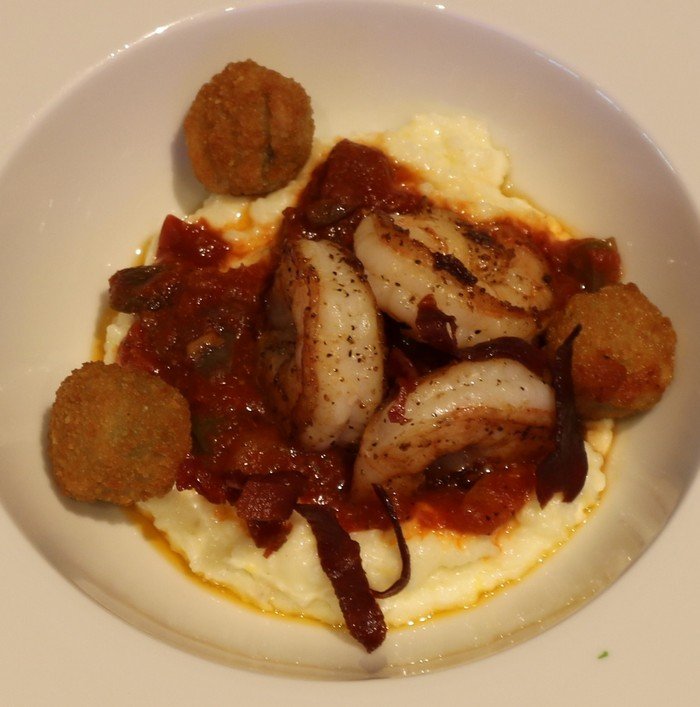 Finally there was a sweet potato gnocchi. Or at least there should be. On the day we were there, the kitchen was out of sweet potatoes, so they substituted tortellini. 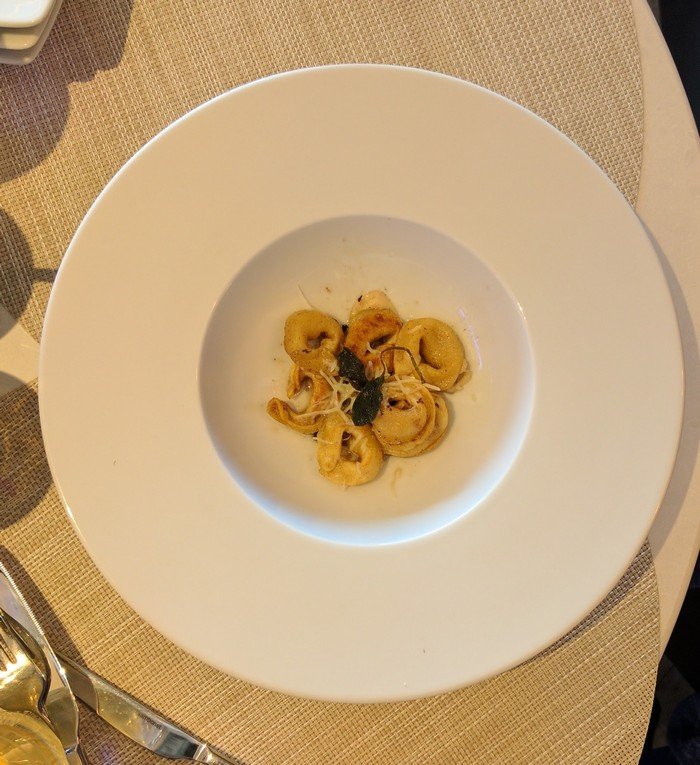 With just eight dumplings, this was one of the less impressive mains. 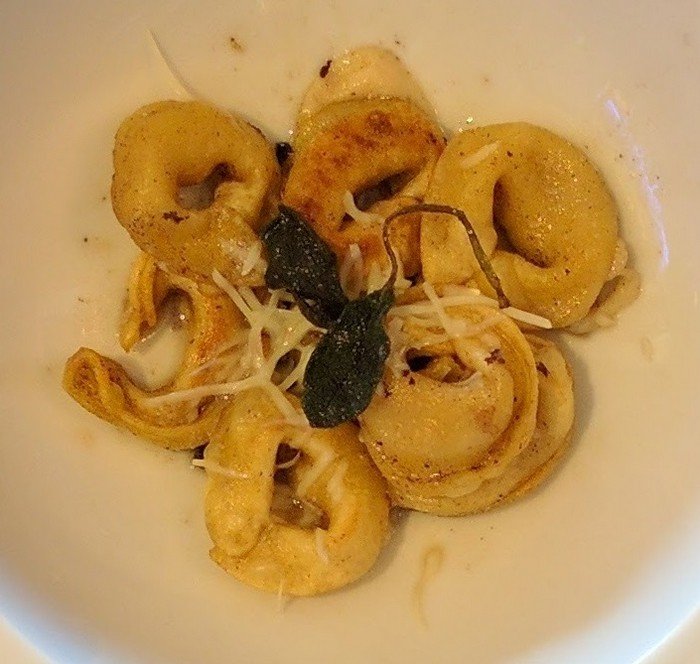 While the entrees were a bit underwhelming, the dessert portion of the menu really stood out.

The first item was a “chocolate decadence” which included a truffle, a panna cotta, and white chocolate bark. My kids were momentarily disappointed that the bark wasn’t cheese. The disappointment didn’t last long….

Then there were two flavors of ice cream, vanilla and chocolate. 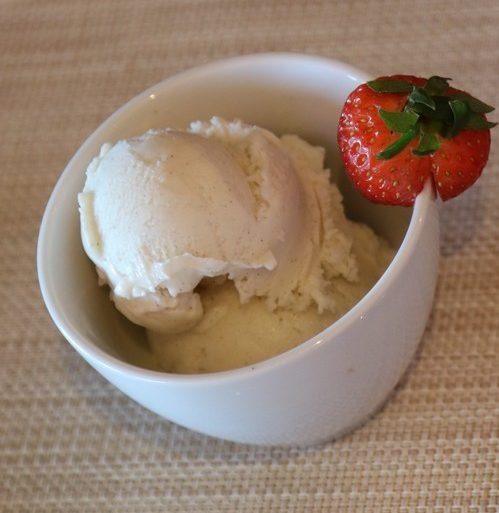 They were served with a strawberry. 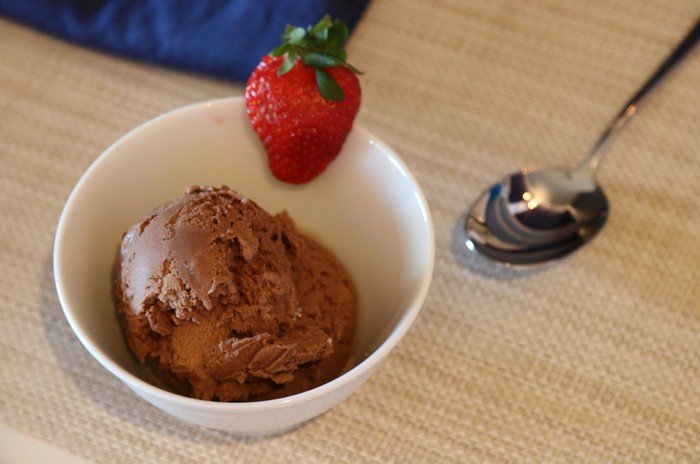 And finally, the pear and cranberry cobbler, which was fantastic. It does take 20 minutes because it’s served warm, but it is well worth it. Just remember to order ahead of time! 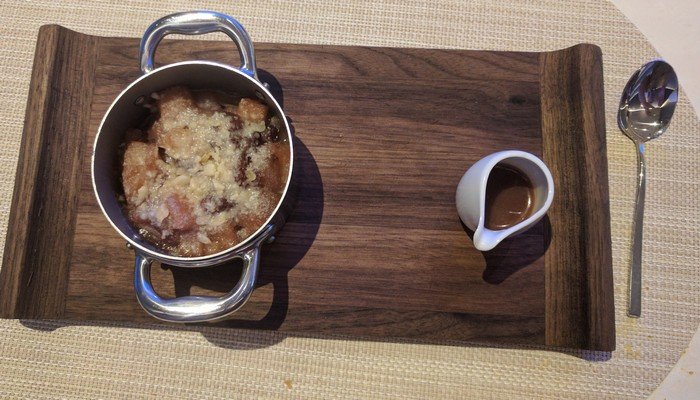 The one flaw with the cobbler is that I think it ought to be served a la mode. Of course, you can easily remedy that…. 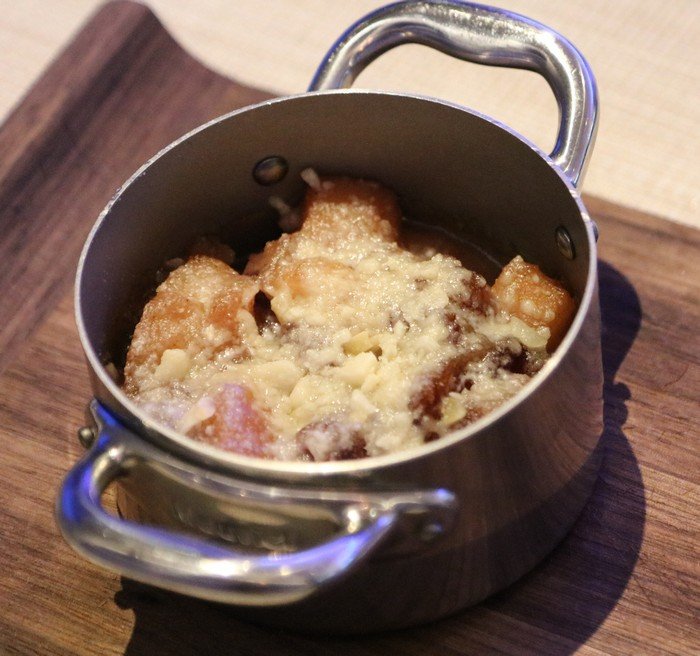 A few notes on timing

We had plenty of time during our visit, but I know that many folks will be on tighter connections, so I kept some notes about how long it took to dine. Note that this doesn’t include any wait for a table, but then again, we didn’t observe any queuing the entire time.

As you can see, we basically went from start to finish in about an hour. With three kids five and under, dining isn’t exactly a leisurely experience for us, but we also weren’t trying to hurry at all.

So overall, I think allowing an hour for the entire experience seems reasonable. Also keep in mind that there are a limited number of tables, so if others are waiting, you might not want to linger as a courtesy to fellow diners.

We were quite impressed with the restaurant style dining at the Polaris Lounge. We had the opportunity to try everything on the lunch and dinner menu and enjoyed most every dish. (Sorry grits.) I believe this is a real game changer that, when fully deployed across the network, can put United ahead of the pack, at least among their US peers.

All of the dishes were of good quality, beautifully presented, and quite tasty. The biggest beef (pun intended) I have with the concept is the portion sizes of the mains which, aside from the chicken, seem to be on the small side. This isn’t necessarily a bad thing given that you are just about to board a flight, but it is something to be aware of so you aren’t surprised.

The service during both of our meals was fantastic. Like, just as good as you’d expect in a nice restaurant. Both Erin and Jay were attentive, friendly, and efficient. They were also happy to accommodate our bustling family with three kids which is a true testament to their patience.

But how did our plan of eating in the lounge and then going to sleep immediately after take-off work out? Well, my five year old son decided he also wanted to also eat on-board the plane. Because he wanted to get the full Polaris experience.

Have you tried the restaurant-style dining at the United Polaris Lounge Chicago? What did you think?

Can anyone tell me where I can buy the seasoned flat crackers? I had some in Ohare. I was told they are made in Chicago at a local bakery.

Wonderful and complete report!, really looking forward to check it out soon.

@Lukas It's called a figure of speech. Please find better things to do with your life than offer article corrections.