This is turning out to be an unprecedented summer of travel, and both airlines and airports are struggling to deal with the increase in demand. Heathrow Airport, one of Europe’s busiest hubs, has realized that more needs to be done to reduce the number of travelers.

The airport has now gone so far as to add a daily passenger cap, and to ask airlines to stop selling tickets for the rest of summer.

Heathrow has more passengers than it can handle

John Holland-Kaye, the CEO of Heathrow, has written an open letter about what the airport needs to do in order to manage the passenger experience over the next couple of months.

Heathrow Airport has seen the number of daily travelers exceeding 100,000 in recent weeks, and this has caused a drop in service levels that the airport operator no longer finds acceptable. Specifically, Heathrow is experiencing long queue times, delays for passengers requiring assistance, bags not traveling with passengers or arriving late, low punctuality, and last minute cancelations.

This is primarily attributed to the number of travelers exceeding the combined capacity of airlines, airline ground handlers, and the airport. The airport claims that it has seen 40 years of passenger growth in just four months. I’d argue that’s a bit disingenuous, but I get the point.

While the airport started recruiting for more staff back in November 2021, that’s not an instant process, and there’s a general challenge with getting workers. It’s claimed that by the end of July, Heathrow will have as many people working in security as pre-pandemic. However, that might not be enough, and similarly, more workers are needed in other functions as well, especially ground handlers.

Heathrow claims that the current number of travelers is putting at risk the safety and wellbeing of staff, so it’s time to take action.

What’s Heathrow doing to manage its lack of reliability? The airport is adding new passenger caps for the remainder of the summer travel period, which is between July 12 and September 11, 2022. Specifically:

While Heathrow is asking airlines to stop selling tickets, I don’t think we’ll actually see that happen. Often last minute tickets are the most expensive, and airlines don’t want to give up that revenue. Airlines want to operate flights more efficiently, so I think it’s much more likely that we see airlines cut frequencies rather than just no longer selling flights that aren’t booked out.

I would imagine airlines are being given more specific guidance about what they need to do beyond just this open letter. I’d imagine the instructions aren’t actually to stop selling seats, but rather to take whatever steps they can to cap the total number of people they’re carrying.

The airport is asking airlines to cap travelers at an average of 100,000 per day. While the request is to stop selling tickets, I doubt that’s how this will play out in practice.

What do you make of Heathrow’s attempt to cap passenger numbers?

Not to be contrarian, but you realize this solution won’t solve the number of airplanes coming in, just a request that those same planes without enough staffing come in less full.

@Kevin: Don't worry - that doesn't make you a control freak. Organized tours are usually sh*t. You're always dealing with that one person/family who just doesn't have it together, and your entire experience will be shaped by your luck of the draw of the guide.

Lucky, I would like to know what your advice is for those of us who will be flying through LHR this summer with luggage. One issue that I ran into at a different European airport (LIS) is that although the airline advised us to arrive three hours early, the baggage check-in was not open until closer to two hours, meaning that it was still a mess, with people barely making their flight despite arriving early, as the airline waiting to open the check-in made there no good solution. How would you work your way around this? 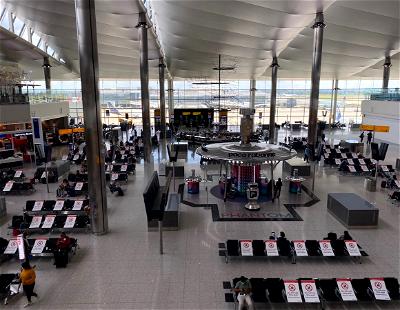