While flight delays have become rather standards in this era, it’s not every day that a flight is delayed for this reason…

Alaska flight delayed because pilots couldn’t get along

This incident happened on Monday, July 18, 2022, and involves Alaska Airlines flight AS1080 from Washington (IAD) to San Francisco (SFO), which was operated by an Airbus A320. The flight had allegedly already been delayed by 90 minutes due to bad weather in the area, but then things got worse.

According to reports from passengers, the plane returned to the gate after pushing back, as the two pilots allegedly couldn’t get along. This is corroborated by multiple people who were on the flight, who all share a similar story on Twitter.

One of the pilots was even quite transparent with passengers about the issue, stating that this was “due to a failure to get along,” and that he was leaving the plane “in the interest of safety.”

One passenger recorded the end of the pilot’s apology, before leaving the plane.

Another passenger recorded a video of the pilot leaving the gate area.

Rather impressively, Alaska Airlines quickly found a replacement pilot, as a crew member who was scheduled to work a flight to Los Angeles was rostered onto this flight last minute. The flight was scheduled to land in San Francisco at 7:05PM, but ended up landing at 9:31PM, less than 2.5 hours behind schedule.

Arguably the passengers on the Los Angeles flight had it worse, as it took quite some time for them to find a replacement pilot. That flight was supposed to land at 8:05PM, but ended up landing at 10:38PM, so that was a delay of over 2.5 hours.

My take on this Alaska Airlines pilot incident

I find some of the commentary from passengers on this flight to be a bit dramatic:

Quite to the contrary, I think it would have been extremely careless and flippant if the pilots flew together when they knew they couldn’t get along. How do you think their communication would have been in the event of an emergency?

It’s extremely rare for two pilots not to get along to the point that one walks off the plane, but when it happens, I’m happy it does. It’s much better to deal with that situation on the ground than in the air. Of course we don’t know the full backstory here, and if these two pilots had any history, if they just got into a heated debate over something, or what.

But the pilots surely know there are consequences and they’ll have to answer for this, so I’d consider their actions here to be anything but careless or flippant.

Alaska Airlines also deserves credit for how smoothly this situation was handled operationally, as there was a further delay of less than an hour beyond the weather delay. Unfortunately that came at the expense of the Los Angeles flight operating on-time.

Lastly, the one thing I’m not sure about is whether it was a good idea to communicate the actual nature of the situation to passengers. I know they say “honesty is the best policy,” but I’m not sure that accomplished much here?

I think this might be a situation where just announcing “something came up with one of the pilots, and we will find a replacement pilot as soon as possible” might be the better communication strategy.

An Alaska Airlines flight from Washington to San Francisco returned to the gate after it was decided that they couldn’t safely operate the flight together. While we don’t know the nature of the disagreement, it’s extremely rare to see this happen. Alaska Airlines managed to quickly find a replacement pilot, so the flight was only delayed by a further hour.

Obviously this kind of situation is unfortunate and frustrating for all aboard, but I commend the pilot walking off if he felt he couldn’t safely operate the plane with the other pilot. Aviation is so safe because of always erring on the side of caution, and this should be no exception.

What do you make of this Alaska Airlines incident?

God, if that's the most traumatizing thing to happen to you, you've lived a very good life...

Totally agree about the passenger tweets: what a bunch of freakin' drama queens. "Oh I only got $175!" Really? That's $175 more than you're entitled to, sweetie. As for the others, my God none of them seem to have ever faced actual adversity in their lives. They'd better not leave the DC or Bay Area 'burbs, lest they be confronted with the real world.

No. They're going to put the very same pilots on this flight the next time you're on it. 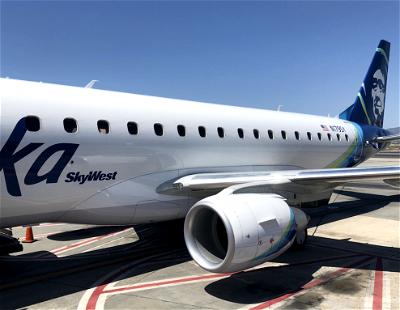