Cathay Pacific has announced that they’re making some drastic changes to their Marco Polo Club frequent flyer program as of April 15, 2016. The good news is that they’re not going strictly revenue based.

Here’s how they describe the changes:

As the Cathay Pacific network continues to grow, so does the need to evolve the Marco Polo Club. New cabin products and additional routes, in particular ultra-long and ultra-short ones, mean that the way members earn status no longer accurately reflects their contribution to the airline. To meet the changing needs of our members, we have looked at ways to provide better, more flexible benefits, and to enhance the overall membership experience for our travellers. Starting 15 April 2016, we will be changing to a new points-based system, which will change the way you earn status and are rewarded.

The funny thing is that I think they’re almost being too harsh on themselves here. We’re used to airlines spinning huge devaluation as “enhancements,” while Cathay Pacific is sort of coming across as saying “well, we realize these changes suck, so…”

And I don’t actually think the changes are that bad. Admittedly Cathay Pacific is following the industry trend and awarding more miles for paid premium cabin travel and fewer miles for cheaper economy tickets. In a way the changes are very similar to the changes British Airways made to the Executive Club program earlier this year.

Cathay Pacific is changing how qualifying for status tiers works. Under the current system, Silver, Gold, and Diamond status can be earned by accruing 30,000, 60,000, or 120,000 elite qualifying miles, respectively.

Cathay Pacific is switching to a points system, whereby you qualify based on how many points you earn rather than how many miles you fly (though there’s a correlation between the two). In a way it’s similar to British Airways’ system of having Tier Points.

Under the new Marco Polo Club program, the following number of club points are required for status:

As you can see, they’re more or less converting at a rate of 100 elite qualifying miles per club point (in other words, status which used to require 120,000 miles now requires 1,200 club points).

Now that we know how many club points are required for status, how do you go about actually earning those points?

Under the new system, Cathay Pacific is awarding club points, whereby the number of points you earn is dependent upon the distance of your flight (within a range) and your fare class. Here’s the chart:

Let’s look at a few example of how earnings rates are changing: 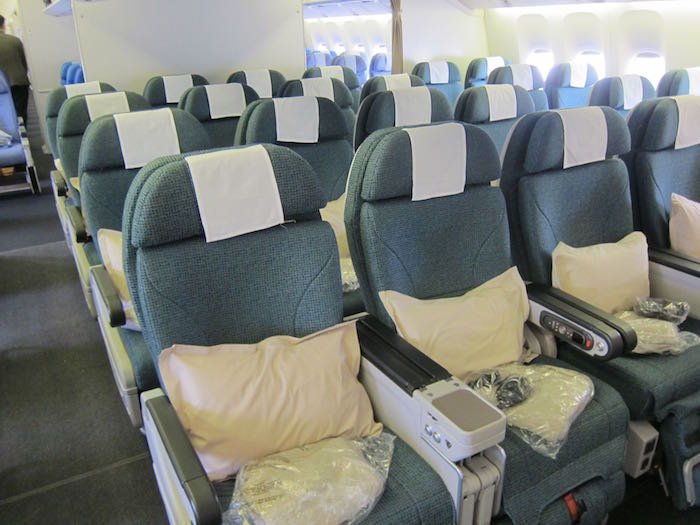 So as is to be expected, you come out ahead under the new system in most markets for travel in paid first & business class, while for premium economy and economy tickets you don’t typically come out ahead. Of course the exact mileage earning varies based on the market, given that some of these “tiers” are quite large (you earn the same number of points flying anywhere between 751 and 2,750 miles). 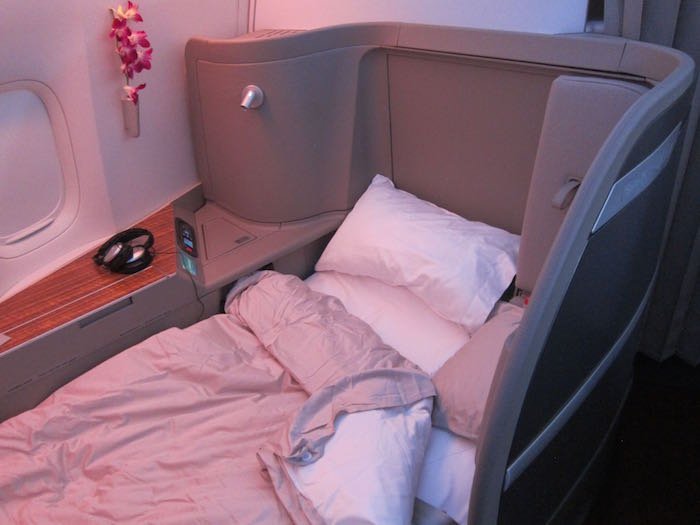 It’s worth noting that this only impacts elite qualifying, and that you’ll still earn redeemable miles as before.

On top of the above changes, Cathay Pacific will be adding some “milestone” elite benefits, for those who overqualify for a given status tier. It’s a nice way to incentivize people to fly beyond the “traditional” mileage thresholds.

You can earn a Lounge Pass for yourself or your travel companion to enjoy access to any Cathay Pacific, Dragonair or eligible partner Business Class lounges at 200 club points.

You can earn two Lounge Passes for your travel companion to enjoy access to any Cathay Pacific, Dragonair or eligible partner Business Class lounges at 450 club points.

You can earn two Lounge Passes for your travel companion or your redemption group member to access any of our acclaimed Cathay Pacific and Dragonair Business Class, or any of our eligible partner Business Class lounges at 800 club points.

You will be eligible to earn four single-sector Bookable Upgrades to one cabin class up for yourself and travel companions on qualified flights at 1,000 club points.

You will be eligible to earn four single-sector Bookable Upgrades to one cabin class up for yourself, your travel companions, or anyone you have designated as a member of your redemption group at 1,600 club points, providing you with the flexibility to discover more and travel better.

You will be able to gift a Companion Card to a family or friend with a complimentary 12-month Gold-tier membership to the Marco Polo Club. 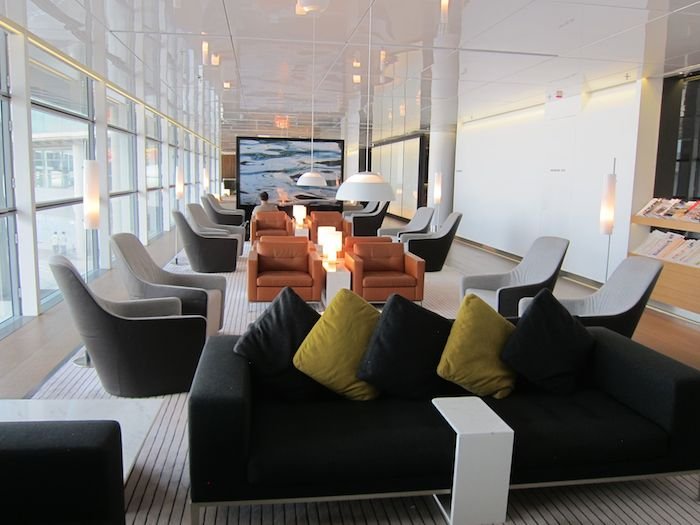 Cathay Pacific has an elite perk whereby you’re guaranteed a seat reservation when booking at least 24 hours out. However, they’re changing this perk so that it’s only valid if booked in:

In other words, you need to book the absolute highest fare in order to take advantage of the seat guarantee.

Cathay Pacific has previously allowed Diamond members access to their lounges regardless of which airline they’re flying. I always think that’s a nice way to reward loyalty, whereby the airline is basically saying “you’re one of our best customers and we want to reward you, regardless of whether or not you’re flying with us.”

Unfortunately that benefit will be discontinued, and Diamond members will need to be flying oneworld same day in order to access lounges. 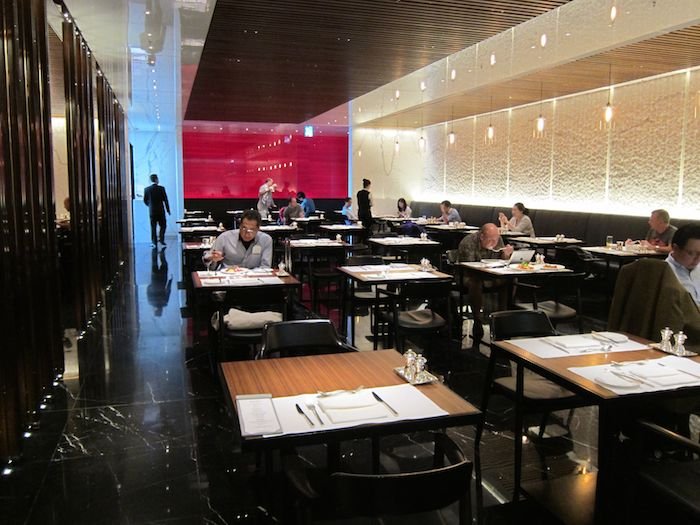 British Airways used to have a similar benefit, but discontinued it in 2011.

These changes are ultimately negative, though I think they could have been a lot worse:

What do you make of the changes to Cathay Pacific’s Marco Polo Club program?

I left CX in 2016 for American. It’s a lot easierbto maintain sapphire status and I get many more upgrades then I was recently getting with CX. The golden years for Marco Polo members with CX were 2008 -2013 before they introduced Premium Economy. Now CX offers very little for the higher prices and very less personal service. I am simply using up my esrned miles before they expire in 2020.....which is another negative...You never have miles expire with American as long as you fly once per 18 months. CX miles expire in 3 years whether you fly or don’t fly. Perhaps after 3-4 years of losing customers the brass at CX will re-examine their changes. However if the intent was to reduce the number of MP members, I believe they are succeeding.

I tried to upgrade flying Washington DC to Bangkok buying economy in the expensive month of December wanting to upgrade to Premium Economy and returning in April using my miles and was told that, even though I am flexible for the return date, every day of April was blocked for this type of upgrade. What kind of Loyalty Rewards Program (I am Silver) blocks an entire month from upgrades? Bill G

Cathay Pacific have completely lost the plot. I've now switched to BA for my Asia - London flights.I'm in Penang and take BA to London from Singapore. BA use the A380 on this route and it's for more comfortable than the overpriced Cathay offering. W John Charman.