Readers often share negative situations they have with airlines and ask for advice. My take on these situations usually falls into one of three categories:

Well, reader @alitheplanegeek shares with me a situation that unfolded on a JetBlue flight yesterday, where my reaction can simply be summed up as… ¯_(ツ)_/¯.

I’m very confused, and I’m curious if anyone has any theories as to what exactly we should make of “Felipe” at JetBlue. Is he a helpful employee going above and beyond, or someone trying to scam a customer?

To set the scene:

At 11:40AM he received an email from someone named “Felipe” at an AOL email address, with the subject line “F616 delayed,” and with the following content:

if you can please call Jetblue San Francisco at XXX.XXX.XXXX. Your flight is 6 hours delayed. We have a flight that leaves at 2:05 pm. Please call 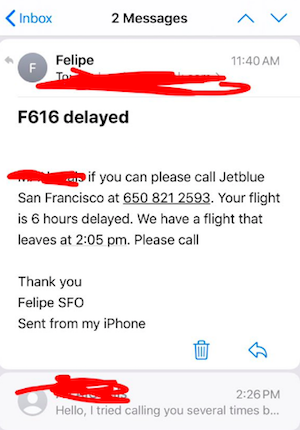 The reader also notes that he takes some responsibility for the situation:

However, I also should take some responsibility. US airlines aren’t known for customer service, so receiving a personal email addressed to me should’ve rang alarm bells.

But he’s also confused about why this happened:

There’s one thing I don’t understand what were his intentions? Why would he try and get me out of the flight? Maybe to have someone on standby to go on the flight? Maybe just to screw over Jet Blue? I can’t say.

I really have no clue what to make of this situation. On the surface I’d like to give Felipe the benefit of the doubt:

But those are about the only potential excuses I could even come up for with him. It doesn’t appear the flight was ever delayed until 11:30PM, it would appear he didn’t properly document the record, and he also didn’t use the appropriate forms of communication.

So clearly this guy wasn’t acting properly, but what I can’t figure out is what his motive would have been for all of this? If Felipe wasn’t who he says he is (as JetBlue seems to be suggesting), what’s his motive to get someone off a flight?

Was he working in an official capacity (maybe the flight was oversold in Mint?), or what other capacity could he be working in? Was he trying to get a friend on the flight, or get someone else a Mint upgrade? I believe the airline has pretty strict policies with Mint, so unlike other airlines it’s not “employee class.”

This is a true mystery to me, and I’m curious if we can crowd-source some theories here as to what could explain this. I’ll also try to get an explanation from JetBlue, even though it seems they haven’t been cooperative up until this point.

My brother Felipe has worked for Jet Blue for over 10 years. His work ethic is impeccable. As part of their service they notify all first class passengers of any delays in a more personal manner. It saddens me that some people think it's ok to judge his character and slander his name. The full story isn't being reported and it's not my place to set the record straight. Hopefully JetBlue will step up and clear up the manner.

while trying to figure out here, JetBlue could investigate and solve this mystery in a minute.

I wonder if the person was one of those frequent flyers - jetblue calls them “mosaic” , American Airlines has advantage members elite etc. Felipe was probably just trying to be a step ahead and get the customer to its destination faster as the previous flight probably had plenty of room . Who wants to be on a 6 hour delayed trip ? I don’t. . As for the email - probably doesn’t realize his personal email is attached to work email. No scam here. 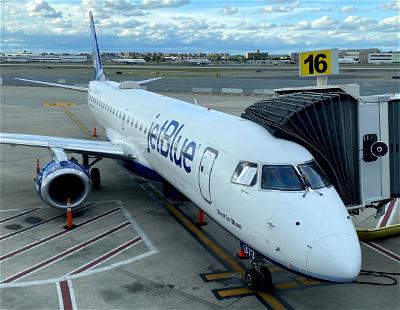 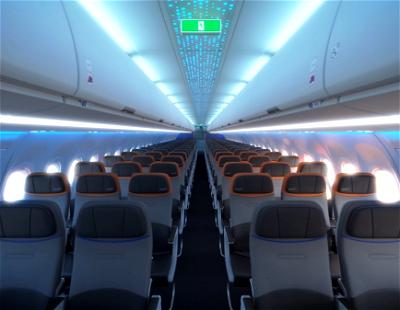 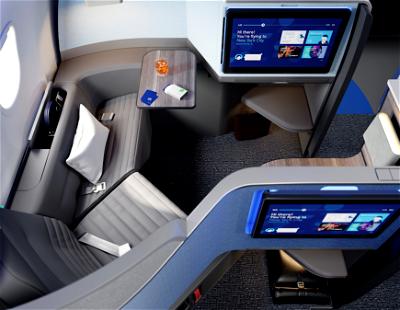