Airlines seem to love advertising how young their fleets are, which I’ll never understand:

Along similar lines (in terms of advertising things which are entirely insignificant), Virgin Atlantic used to write “4 Engines 4 Long Haul” on the side of all their planes, inferring that planes with four engines are better than planes with two engines. That was convenient when their fleet had just A340s and 747s, but as not surprisingly they changed their mind and removed that after they started taking delivery of A330s and 787s, realizing that these planes had lower operating costs. 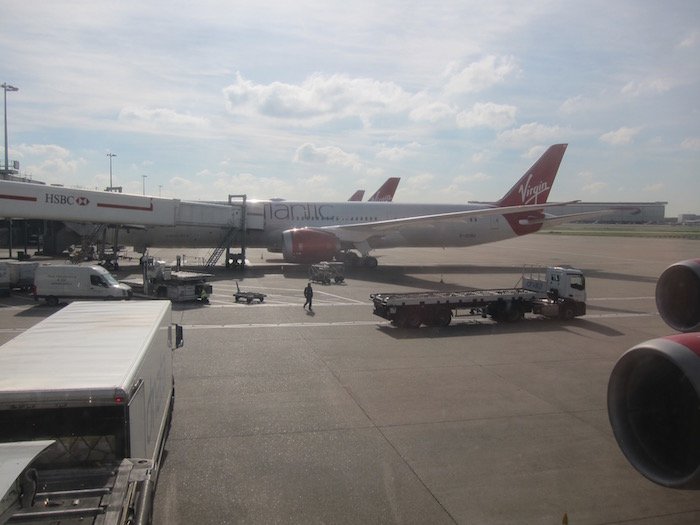 Speaking of aircraft age, there’s an interesting story quoting Delta’s CEO, Richard Anderson, regarding the future of the second-hand jet market. While US carriers have mostly been purchasing new planes, Anderson sees value in buying used jets, and thinks the prices will fall even further over the next 12 to 36 months.

Anderson, whose airline has recently ordered both second-hand and new planes, told a conference call on Wednesday that the used wide-body market was a “bubble” and “ripe” for purchases by Delta over the next 12 to 36 months.

Old planes from the likes of Singapore Airlines Ltd are expected to be available soon, Anderson said.

“We get calls all the time,” Anderson said about used widebody planes, adding that no deal is in the works. “Prices are going to get lower. You wouldn’t strike a deal now.”

“We think that weakness in that aircraft bubble in widebodies is going to spread to narrowbodies, and that there will be some huge buying opportunities,” he said.

Just how much cheaper are these jets used? Anderson thinks decade-old 777s will go for just $10 million, while the sticker price for new ones is 30x that:

Anderson said leases of used Airbus A330-200 aircraft would be five times cheaper than new ones and that decade-old 777-200 aircraft from Boeing would cost $10 million, versus around $300 million at list prices for new ones.

As much as I criticize the SkyMiles program and think Richard Anderson says some ridiculous things, they’re the world’s most profitable airline for a reason. Assuming fuel prices stay fairly low, there’s a lot more value for the airlines in getting amazing deals on used planes rather than buying new ones which are slightly more fuel efficient, like the A350 or 787.

Delta is pretty good about refreshing the interiors even on their older planes, not that a 777 would by any means be considered an outdated plane.

Do you care about the age of the plane you’re flying on, or just that it’s well maintained?

I fly to the Philippines with my wife to visit family every year. Living in Cincinnati and flying out of CVG on Delta has become commonplace. Connecting through DTW or MSP we would fly on Delta's old B747-400s to NRT, we always arrived exhausted, fatigued, and dehydrated. Our first day in Manila was spent recovering from the flights. Last year we used our Skymiles to book our trip. Delta routed us through ATL and put us on Korean Airlines for the long hop to Asia. Our outbound was on a B777-300ER to ICN, then a B777-300 to MNL. We could not believe the difference in how we felt once we arrived in Manila. While tired from the nearly 24 hours of travel, we did not feel nearly as bad as on our previous flights. We slept well that evening and awoke the next morning fully refreshed and ready to go. I could not believe how good we felt. We felt good enough to spend the day out in Manila instead resting in the hotel as before. We experienced the same on our inbound on a B777-200 out of MNL to ICN and a A380-800 from ICN to ATL. The new planes and their advanced cabins' seats and environmental controls made the difference. It was like gaining an extra day! We have booked this year on Korean Air and their modern fleet, including the new B787-8. Because of the old fleet Delta flies, we are no longer booking on Delta.

Would u drive your car for 30 years even if the service center said it could run as good as new if properly maintained? Even through a storm? Airlines don't always buy new replacent parts and cut corners where possible When your old pile of bolts goes into a stall you can probably recover When your plane stalls or a part fails in the sky from fatigue I suppose you can reach for your parachute ;)