I imagine they don’t share these things for competitive reasons, since they don’t want other programs being able to track the competition too closely.

I’m sure we’d all be fascinated to know the number of elite members major programs have, and in particular how that’s broken down between tiers.

But aside from a few leaks over the years, I’ve never really seen an airline share these things.

In the American AAdvantage program, Concierge Key is the top tier, invitation only status. The qualification criteria aren’t published, but as a general rule of thumb:

So while American has never officially revealed how many Concierge Key members there are, we may have just found out unofficially.

As noted by the always observant JonNYC, a chocolatier posted on Instagram about a big project he just finished up. This includes a picture of boxes of chocolates that are allegedly going out to Concierge Key members.

The caption talks about how they’ve prepared 11,300 boxes, and says “a big thank you to American Concierge Key for trusting us.” 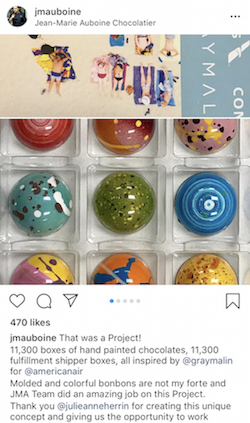 Well that sure is interesting. Based on this I think it’s safe to assume that there are at least 11,300 Concierge Key members.

What we don’t know is if all Concierge Key members are getting these boxes of chocolates, or if they’re only going out to some members. It could be that there are actually significantly more members than that.

Before this whole thing came up, I would have guessed that there were 10,000-15,000 Concierge Key members, so I wouldn’t by surprised if this is in fact the entire membership, as it’s within the range of what I was expecting.

We should be able to determine pretty conclusively if this is in fact the entire Concierge Key membership base. I imagine these are just being sent out now, so if you’re a Concierge Key member, please report back on whether or not you receive a box of chocolates.

If everyone does, we have our answer. If there are several data points of people not getting them, then it’s safe to assume there are more than 11,300 members.

I am always envious when there is a Concierge Key member on my flight. I could never reach this status because I am not a business traveler nor do I spend anywhere near the amount needed per year. However, I am happy with my Platinum status because it definitely has afforded me more upgrades than when I was only at Gold status. My strategy is to buy first class tickets for longer domestic flights and coach for the shorter flights. I also try and fly one international trip each year in business class. However, AA has now made it so difficult to obtain lifetime status. I have been lifetime gold for years but with the changes it will take me about 20 years to achieve lifetime platinum.

Just a thought. Since American has about 6,700 flights per day. If every CK members made a round trip every week, and there are 11,300 CKs, you would expect to see 0.48 CKs per flight. Since, CKs probably fly more peak hours and weekdays (I do), the number might be closer to 1+ for every flight during busy times. Ao, that total number of CKs (11,300), sounds about right. BTW, I did not get the fancy chocolate, but the “regular “ chocolate this year instead..

@Sam S.B. Those appear to be [somewhat educated] guesses from a self-promoting link. I wouldn't put too much stock in them.