We’ve seen a lot of crowdsourced travel innovations lately, ranging from luggage to travel pillows. However, this has to be one of the most… odd things I’ve ever seen.

Yesterday Tech Insider published a video of a new travel pillow that’s now available for pre-order, called FaceCradle. The video already has over four million views, and I imagine it’s not because that many people are interested in travel pillows. 😉

Instead this has to be one of the most hilarious/bizarre travel pillows I’ve ever seen. I’ll let the pictures speak for themselves: 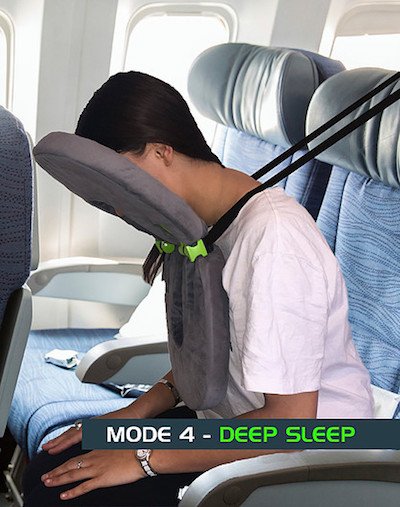 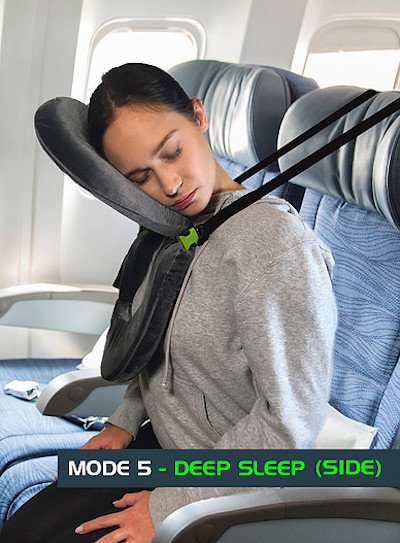 I can’t decide what’s most amazing about this setup:

What do you think — is this a brilliant innovation, or does it cross the line into crazy?

FaceCradle attaches to the winged headrest so it does not cover the TV behind. A regular neck pillow has looked like a toilet seat since it was invented in 1941. But like the toilet seat, the neck pillow is not good for getting sleep in transit. Some neck pillows claim to be an "evolution" but FaceCradle provides many more comfort options with support that holds you where you sleep. The idea that you can sleep for long periods of time sitting with your head upright, is frankly rediculous. So no matter how old or new your neck pillow design is, it isnt a FaceCradle. We are very pleased to receive anyones comments on our statement "FaceCradle is the best option for sleep in transit, other than a bed seat".

I have sleep apnea, which means whenever I sleep my tongue slides back and blocks my air passage. When that happens, my body wakes me up and I start awake with a loud snort. At home, I use a CPAP machine which solves that problem. However, on a plane, I have to use the commonly used u-shaped pillow. I really hate it because I end up waking up with a big snort. It's very embarrassing. I still wonder whether I should warn my seatmates first or just let it happen and ignore their responses. Hmmm. It looks like this would work in one of the positions but I'm not willing to buy something with this many bad reviews.

I used it on a long haul flight recently and here are my observations. No - it doesn't cover the screen of the person behind you as you are meant to wrap the straps around the headrest on your own chair, no talking or negotiation required. It's nice and firm, so if you put it on sideways for the snooze, it's great, your head doesn't roll forward and cause you to fall on the person next to you. Yes, the neck space is too small. I am small so it didn't worry me, but my partner would not be able to use it. The deep sleep mode didn't work for me at all because even with the pillow extended to the correct angle, the bracing doesn't feel strong enough and it eventually slips leaving you kind of hanging. Plus, your natural instinct is to have your back cradled too, so you will just wake up or roll onto your neighbour anyway. For me, the only way it worked was on side snooze mode, but this was superior to bean bag style pillows so I'm fairly happy with it.It could be thinner at the widest part of the loop though as if you use it as a normal pillow, it just forces your head forward and those seats already do a good enough job of trying to snap your neck.