One of my favorite aspects of flying with the Gulf carriers is that they have cabin crew from all over the world. So while I find that Gulf carriers sometimes don’t have the best service (there’s huge inconsistency), I’m always fascinated by the crews and learning where they’re from.

That’s an area where Cathay Pacific is unique among airlines in the region. Hong Kong is an outrageously expensive city, so wages for their crews (both pilots and cabin crew) are fairly high. As a result, Cathay Pacific has crews based all over the world. For example, last I heard they had over 400 cabin crew based in the US (they also have a significant number of pilots based in the US).

I just flew from Hong Kong to Los Angeles (thanks to those who were concerned about my health — I’m starting to feel better and am not contagious anymore, and would like to finish recovering in the US). What was most memorable about the flight (since I tried to rest for most of it) is how almost the entire crew was based in North America — the pilots were based in Los Angeles and Vancouver, while the flight attendants were Los Angeles based (there were also some Hong Kong based ones onboard, but not in first class).

One of the first class flight attendants even used to work for US Airways. How interesting it must have been to go from working for US Airways (let’s keep in mind this is the “full service” airline that tried to eliminate free soft drinks in economy at the time) to working for Cathay Pacific, where you’re pouring nice champagne and caviar.

On one hand I love the general diversity of where the crews are based, though in my experience the North America based crews just can’t compete with the Hong Kong based crews in terms of how polished they are. There are a few exceptions (on both sides), but there’s something I still find fascinating about them. If nothing else, I love hearing the stories of the US based crews — many of them don’t live at their base, so they commute (the flight attendant taking care of us lived in Arizona and commuted), and they also only ever fly a single route. Could you imagine only ever flying Los Angeles to Hong Kong? That’s not a lot of variety…

I should mention that even many of Cathay Pacific’s Hong Kong based cabin crew commute. Many of them live in the Philippines, Thailand, etc., and commute to Hong Kong for work.

Really what I get most excited about is the US based pilots, and maybe that’s just my inner kid talking. When I was a kid I wanted to be an airline pilot so badly, and it was always my dream to work for Cathay Pacific, since I loved the brand and knew that they had pilots based in the US. So every time I’m on a Cathay Pacific flight and hear the welcome from the cockpit with an American accent, I can’t help but think that could have been me.

Oh well, I guess my life doesn’t suck too much, being seated one row behind the cockpit… 😉

Have you flown with one of Cathay Pacific’s foreign-based crews? What was your experience like?

I flew on Cathay on an F award ticket from Boston to Hong Kong two years ago. On his way to the crew rest area, one of the flight crew stopped at my seat, addressed me by name, welcomed me aboard and apologized for the turbulence we were encountering.

@Norris Lee Indeed, I haven't noticed animosity in other blogs.

Not sure if they’re based in Taiwan but EVA employ Vietnamese crew as well. 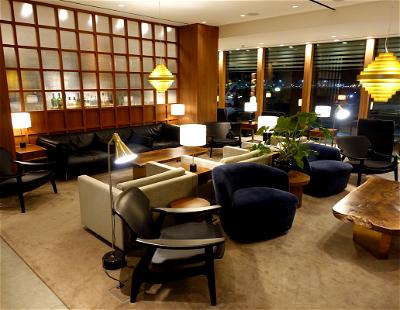