Earlier in the week United announced that they would be launching nonstop 787-9 service between Los Angeles and Melbourne. The 787-9 is the “stretched out” Dreamliner, and United is one of the launch customers for the aircraft.

Anyway, what’s worth noting about this new flight is that United is releasing a ton of saver award space on it, in both economy and BusinessFirst. Getting to Australia in December and January is typically one of the toughest award tickets out there, though right now United has released a ton of award seats on the new route, even for groups of four to six passengers. I don’t expect this will last, so if it interests you jump on this ASAP.

For example, here’s the calendar for award space between Los Angeles and Melbourne when searching for four award seats in December and January: 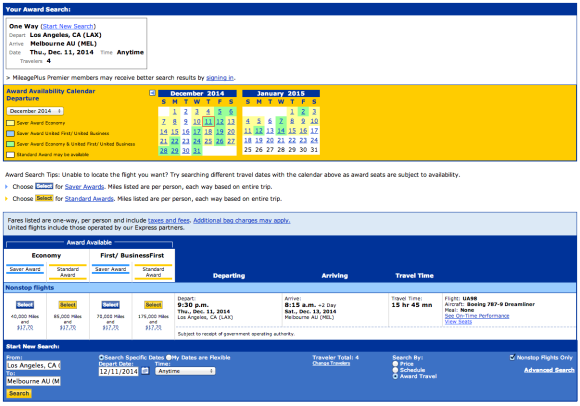 And just to make sure it’s not some crazy glitch, Aeroplan’s website shows the award space as well:

For what it’s worth, United’s 787-9s will have 48 fully flat BusinessFirst seats, spread across eight rows in a 2-2-2 configuration. Here’s the seatmap:

So if you’re looking to redeem miles to Australia over Christmas or New Years, it doesn’t get better than this. Here are the best options for redeeming miles on the new flight:

Ultimately I’d say the single best value would be redeeming 110,000 US Airways miles for a roundtrip ticket on the new flight, as it’s the lowest redemption cost and they exit the Star Alliance as of March 30, 2014. Furthermore, US Airways allows 72 hour no-obligation courtesy holds, so you can easily hold the flights now if you need a bit of time to finalize. 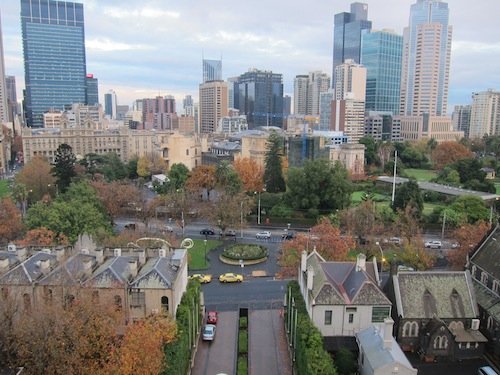 (Tip of the hat to @pvtejasvi)

Awesome! Thanks. I would happily pay for pointspros to do it, but I'm interested in the challenge. My mind may change after 1 or 2 calls to US Airways though. :)

@ Autolycus -- Only one I can think of is LOT, but that's not really helpful in this case. Singapore does sometimes release business class space to Australia, though they tightened up recently so for the most part won't be available. I would tell the agent "I'd like to travel to New Zealand and found some flights that should be available. Can I maybe give them to you one by one?" Usually does the trick for me...