As part of their fleet renewal, American will soon be taking delivery of their first Airbus A319 aircraft. They’ll be going into service in mid-September, and will initially operate out of Dallas to secondary markets. The initial schedule has them flying between Dallas and Charlotte, Cleveland, Memphis, Wichita, Dayton, Lubbock, El Paso, Huntsville, McAllen, and Toronto. So these really aren’t premium routes. You can find the full details of the new A319 routes here.

The more interesting news is the seatmap of the new A319, which has now been published. It ain’t pretty. Before we get too much into it, let’s be clear that the A319 is more or less replacing the MD80 in American’s fleet, which has 16 first class seats, 40 Main Cabin Extra seats, and 79 coach seats. 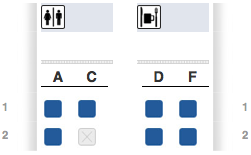 Then there will be 102 coach seats. 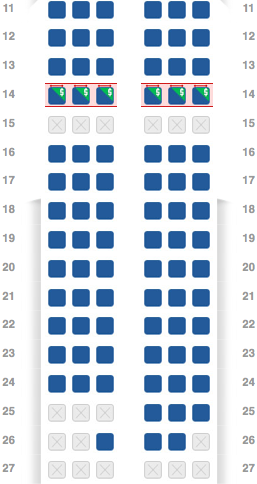 Just to be clear, the plane itself is a huge upgrade over the MD80, though as an elite member hoping for a first class upgrade or Main Cabin Extra, this will be a plane to stay away from.

I’m a bit conflicted on what to make of this. The configuration itself is bad news for elites, and I think we should’ve all seen this coming with the merger. It’s simply not sustainable for American to have 16 seat first class cabins, and have a third of their coach cabin be Main Cabin Extra. At least not on an A319, which has fairly high operating costs. That being said, this is the other extreme.

That’s why I kind of wonder whether American plans this configuration for their entire A319 fleet, or whether they’ll have sub-fleets of A319s. I can’t imagine there’s all that much premium demand between Dallas and Cleveland, for example, but I imagine American will also be flying these in more premium markets eventually. For example, currently flights between Chicago and Dallas are almost exclusively operated by MD80s, and even with 16 first class seats, they often sell out in advance. If you cut the number of seats in half I think we can all kiss goodbye to upgrades on the route ever again.

Anyway, here’s to hoping that this configuration is only for a sub-fleet of their A319s, and that the A321s have a much larger first class cabin.

What do you guys think? Will this be the configuration throughout the A319 fleet, and how many first class seats do you think they’ll have on the A321s?

I flew one of these planes from Charlotte to Dallas. I literally had about 8 inches from my nose to the seat back in front of me, and the seat in front hadn't even reclined. I could barely fit a paperback book between my nose and the seatback. My knees were pressed hard against the seat in front of me. The tray table, even folded in half, would barely come down. (Admittedly I am a large guy, but not nearly as large as the two people seated next to me.) I couldn't even fit a paperback book in the seatback pocket in front of me and had to hold it on my lap during takeoff and landing. I will avoid this plane whenever possible, even if it means switching off of American and going to another airline.

Flew it (a319) from DFW to CLE. The seat forces you to sit up perfectly straight...my feet were numb before the flight took off. My tray table would not fold down in the extended position and barely folded down in the "half" position. A quick look around the cabin and I noticed my fellow passengers were having the same issue. After deplaning, the various conversations of people exiting the plane were exclusively about the lack of room on that plane. I requested a Exit row seat on the return flight. Felt like heaven. Don't ever sit in a "regular" seat unless you are a below average sized person. If I could buy my own tickets (for business travel) I would NEVER fly this plane.

Ben, not sure if you read these comments, but I noticed that AA put the 319 on the DFW-BOG route, which is different than the middle america short hops.