With the number of airline mergers we’ve seen lately (including with Alaska, American, Delta, and United), airlines have had scattered operations at many airports. Obviously airlines often operated out of different airports pre-merger, and once those mergers closed, it wasn’t easy to just move things around overnight. in order to simplify operations.

Well, it looks like that will finally be happening. All American Airlines flights will be operating out of Terminal B at LaGuardia Airport as of December 9, 2017.

Here are the musical chairs taking place at LaGuardia as of December 9, according to the Port Authority:

Here’s how American describes the move in their press release:

Upon the move, all American flights from LGA will be located in Terminal B. Since Dec. 2013, flights have been split between Terminals B and C. This consolidated operation means all customers will check in at Terminal B and American will operate flights from each of the terminal’s four concourses.

“Moving our entire operation under one roof will not only make travel easier for our customers traveling to, from and through LaGuardia but our team members will enjoy upgraded spaces and be better able to work together,” said Loretta Bove, managing director – LGA Hub Operations. “Customers will know exactly which terminal to check in to, they won’t have to travel far for their connections and Admirals Club members can enjoy our upgraded club featuring one of the best views of New York City.”

And here’s a map of American’s consolidated operations at LaGuardia: 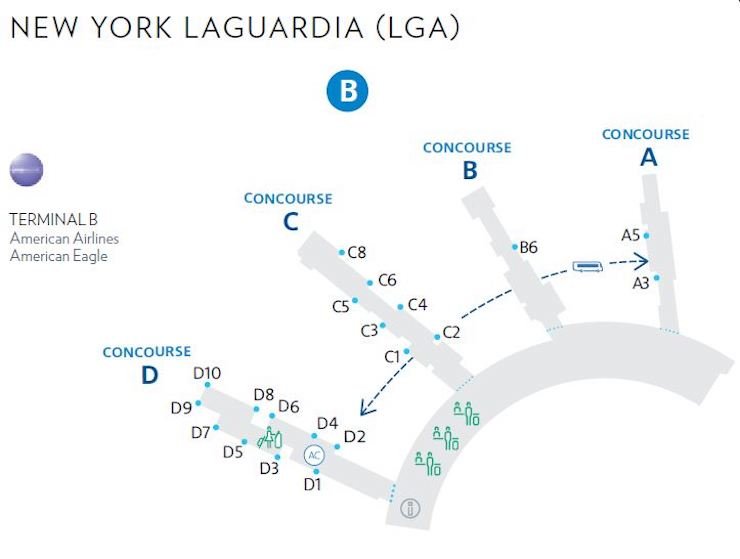 In theory the consolidation is good news, though there is a major downside. Currently American has an Admirals Club in both Terminals B & C, while going forward they’ll only have one in Terminal B. So they’ll be serving the same number of passengers with just one lounge (in fairness, the Terminal C lounge is smaller, but still).

Furthermore, the above map may look straightforward, though the annoying thing is that the four concourses aren’t actually connected airside. There will be an airside shuttle bus connecting the concourses, but if you want to walk between the concourses you’ll have to exit security.

American is moving into a single terminal at LaGuardia, though it doesn’t simplify and improve things as much as you’d expect. The airline will have a single lounge going forward, and even though they’re technically in a single terminal, a bus ride will still be required to connect between concourses.

Omg commenters calm down. In a few years these terminals will be gone, so no more confusion of letters and numbers. And sorry for your loss delta shuttle passengers @pavel, as a jetblue passenger, I welcome the move!

It would be so much easier if they'd jut use numbers for the concourses in Terminal B, or use numbers for the terminals and letters for the Terminal B concourses. But we have to keep in mind that this is the Port Authority at work here. Might be time for JetBlue to reconsider slot usage and try to add flights to ORD and DCA, and/or more frequencies to BOS, to take advantage of the MAT location.

The United Club is just outside the C concourse in Terminal B, so no, United isn't just going to give up its gates to make AA's life easier.