Update: Unfortunately the video has been removed. If I find it anywhere else online I’ll be sure to post it.

Admittedly there are more important things going on in the world than new airline safety videos, though I find this interesting nonetheless.

We’ve known for a while that American Airlines was supposed to introduce a new safety video, which was to coincide with their introduction of new uniforms several weeks back.

American hasn’t actually made the switch over to the new safety video, given everything else going on in the world. View from the Wing flags what seems to be American’s new safety video, which is the first time I’ve seen it leak.

The video was initially published on Vimeo by Charlie Uniform Tango, the production company that worked on the video. Unfortunately they’ve now deleted it within hours of the video getting attention.

I think it’s safe to say that this is the new video, given that the employees are wearing the new uniforms.

My thoughts on the new safety video

This safety video isn’t going to win any awards. It’s not like American Airlines was going to have a comedy routine or rap battle in their safety video, so that’s not too surprising.

My initial take on the video is the following:

What I was most curious about with this video is what slogan they’d use. In 2019 American Airlines requested trademarks for the following terms, leading us to believe that (at least) one of them would be their new slogan:

Well, the video ends with “We Fly So You Can Soar,” and I guess that answers our question as to which one they decided on. 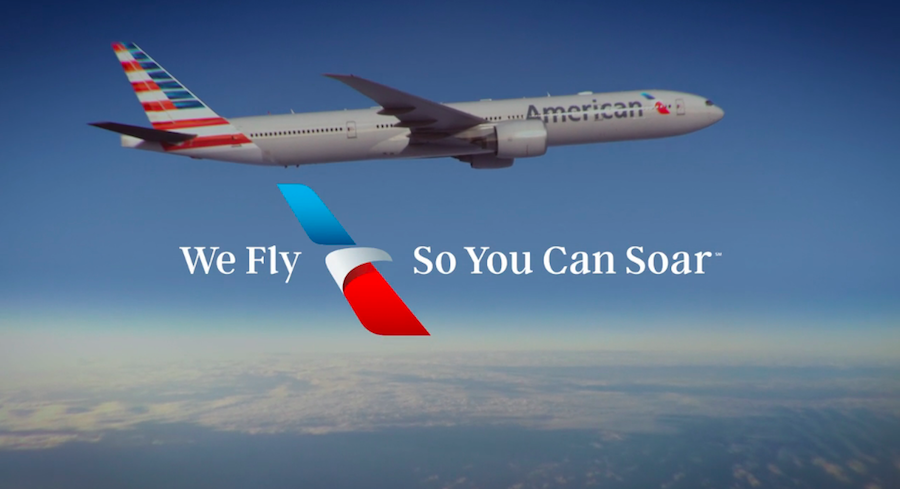 At the time I shared my take on each of the above new slogans, and my thoughts on that one was the following:

We’re humans, not birds. And the first thing that comes to mind is “we fly so you can be sore,” given American’s new aircraft interiors. It also sets the bar low, and does nothing to differentiate American from any other airline.

Every airline flies, so why are American customers more likely to “soar?”

So yeah, it’s probably the most honest of the potential slogans, though does nothing to raise the bar for the airline.

I assume the above is American Airlines’ new safety video. It was presumably supposed to be launched in conjunction with new uniforms, but was likely delayed given everything that’s going on.

I think the video is non-offensive enough — it’s not too long, and it won’t become tiresome as a frequent flyer.

Then again, with American removing TVs from many planes (and not offering them on any newly delivered narrow body planes), the number of flights with safety videos will be decreasing (since planes without TVs have manual safety demonstrations).

What do you make of American’s new safety video?

I find it amazing so many people comment. I just flew American 4 times in 3 weeks. I watch the videos for just that safety, nothing more! Half or more then half the people are texting, sleeping, on laptops, doing anything but watching or reading or paying attention to the safety part before departing. Trust me God forbid something ever happened all you judgemental jackasses would of wished you paid attention! It's not about catchy slogans or uniforms , its about what to do when things go wrong and you with your nose in your tablet or phone panics and now that flight attendant you ignored or video now becomes something you family is going to point fingers at with there attorney if you don't make it. Pay attention because American Airlines does care, the pilot and flight crew on all my flights have done a great job. If you think it's easy or you can write something better to get the attention of self absorbed, self centered, critical people who most think it's all about them , then please write a video for safety for any airline. Truth is you should just be GRATEFUL , THANKFUL, AND PRAY THAT YOU NEVER HAVE TO USE ANY OF THE INFORMATION ON THE SAFETY CARDS, VIDEOS OR DEMONSTRATIONS. GOD BLESS THE PILOTS & CREW ON THE PLANES & BELOW WHOM WORK HARD TO GET MILLIONS OF PEOPLE WHERE THEY NEED TO GO! from a regular person . I am not affiliated with AA at all. Just filled with common sense.

The old, old one was less racist. It had all races, all ages, genders, jobs, real people doing real airline stuff. It had a female pilot and male flight attendants, and an Asian spokesperson with every other race represented with a speaking part. The recent one has a white girl in clicky heels, and ALL major acting parts were played by young white people. The one black lady with any focus is servicing the main white girl's seat belt buckle. That's it. I HATE that one, but I think it better represents NC-based US Air, who is really in charge now.

Does the phrasing "first, let's buckle those belts" (from old safety video) make anyone else cringe every time they hear it?