This week American Airlines has rolled out new menus on their flights within North America.

There are eight lunch choices and eight dinner choices, and you should expect to see them cycled throughout the coming year, with different routes getting different meals.

The menu is designed by Dallas chef Julian Barsotti. When I say “designed by,” my guess is that they simply paid him some amount of money to put his name on (not even) glorified cafeteria food.

As noted by View from the Wing, you can expect for there to be eight new lunch choices and eight new dinner choices.

The lunch choices will be as follows (with the first four being salads, and the last four being hot options):

Then for dinner you can expect the following eight options:

I took an American Airlines lunch flight on the first day that these new menus were in place. For whatever reason I wasn’t able to pre-order my beloved Asian Vegetarian meal (there were no special meal choices), so Ford and I got to sample the two options.

I ordered us one of each of the options. I have to give American credit, they’ve really improved their catering. Here’s what we were served: 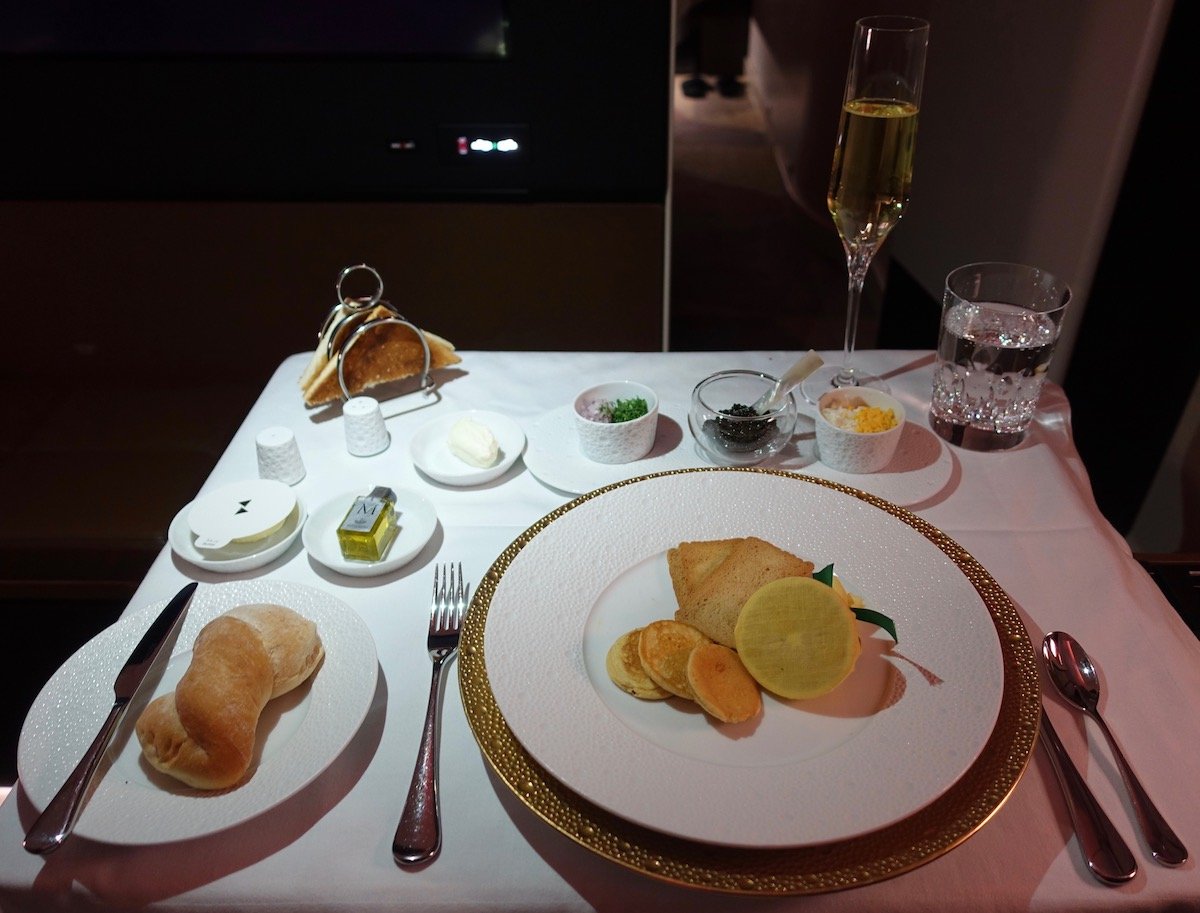 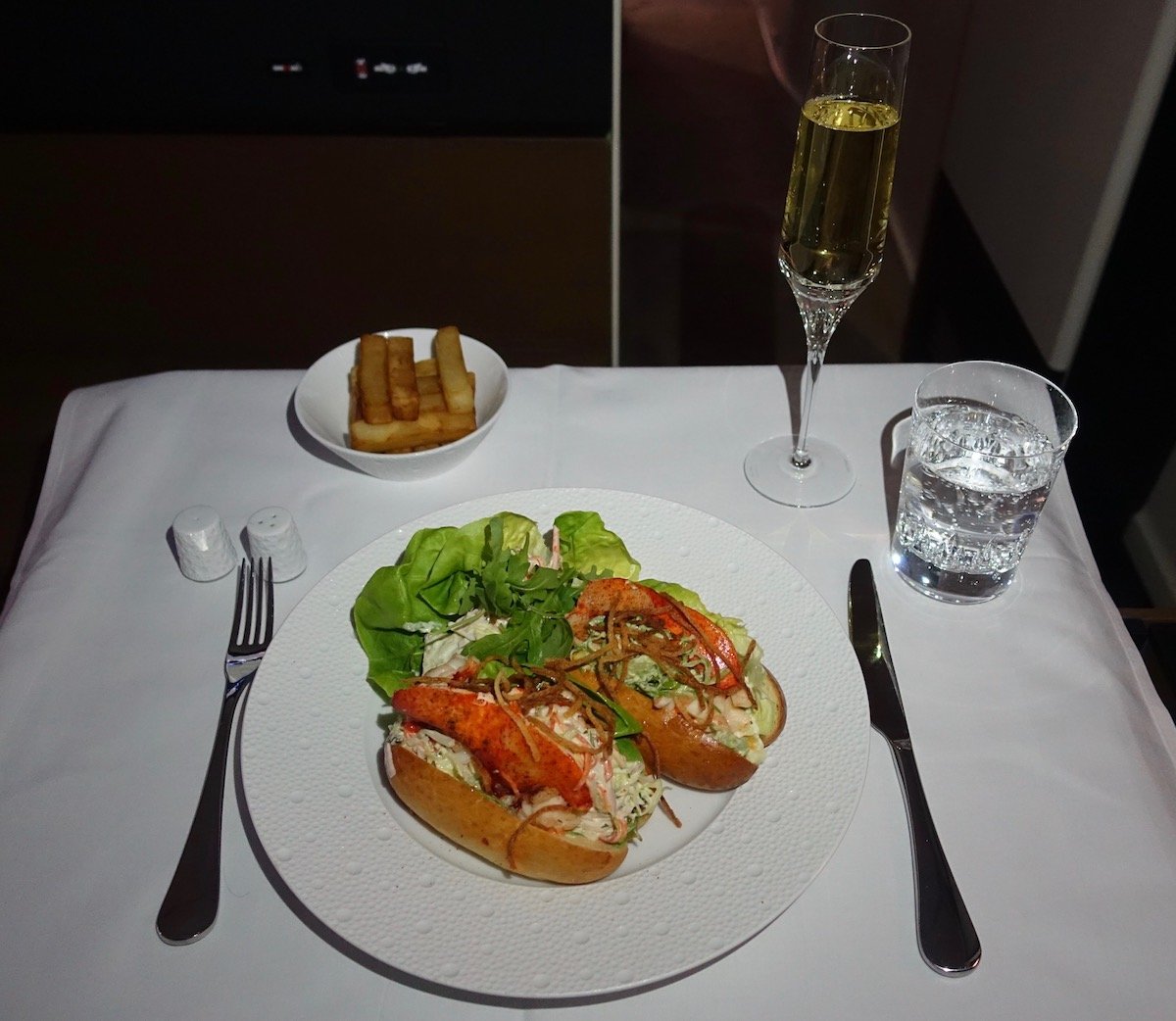 Just kidding, of course. Instead I was served this equally delicious meal: 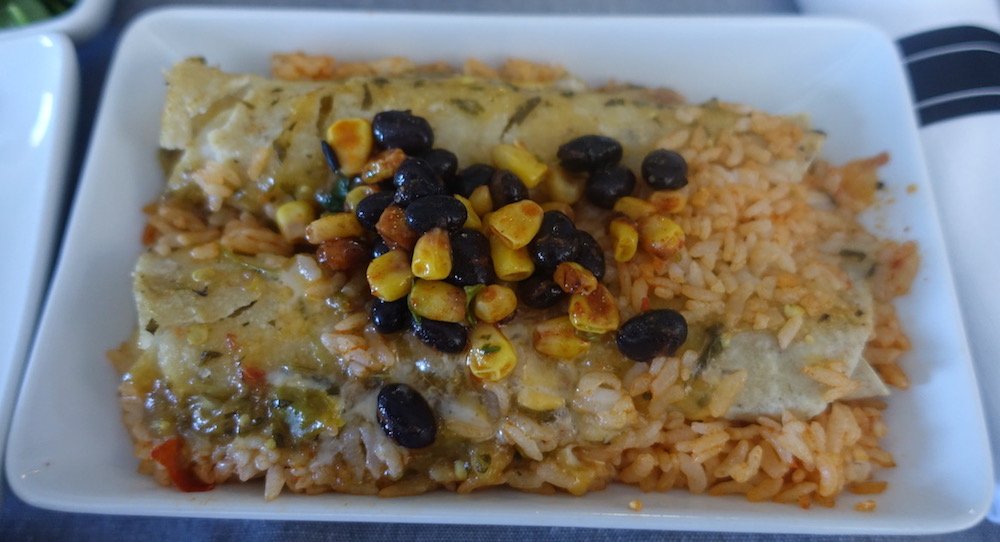 Okay, in all honesty, as usual service began with warm mixed nuts. 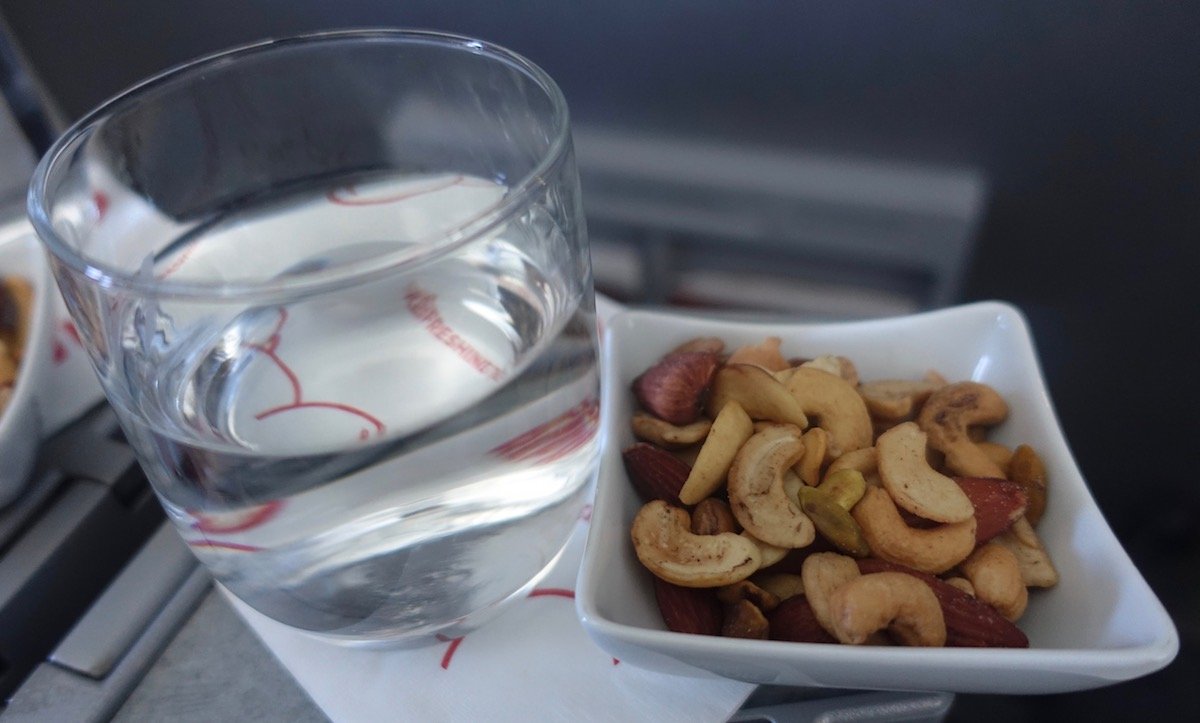 One option was the mezze trio with a side of chicken. This was actually not bad at all, and one of the better non-special meals I’ve had on a domestic American flight in a long time. 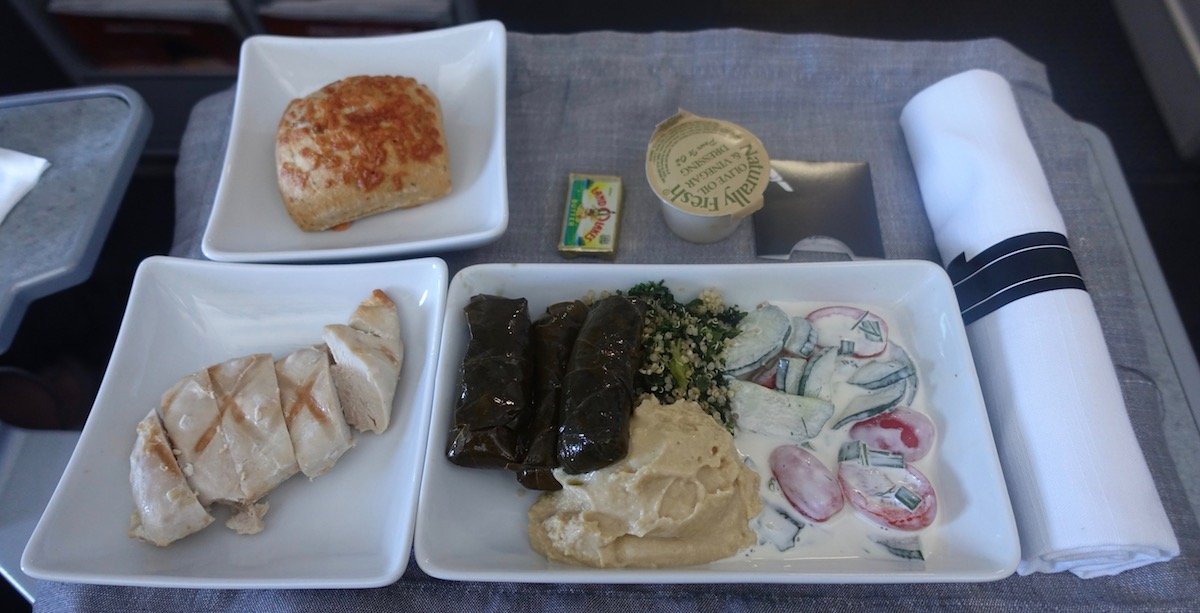 The same can’t be said for the hot meal. I just really can’t wrap my head around how the one hot option they choose to serve is a cheese enchilada. 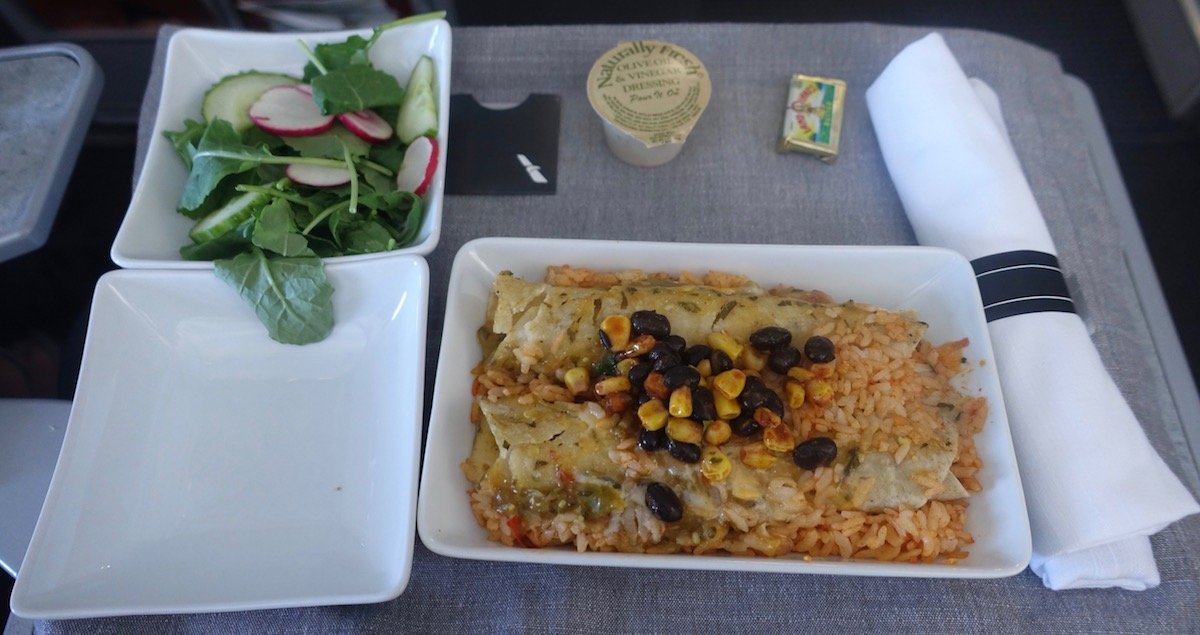 Look, I’m far from the healthiest eater in the world, but I had two bites of this (to try it), and I had a stomach ache for the rest of the flight. Just ugh. 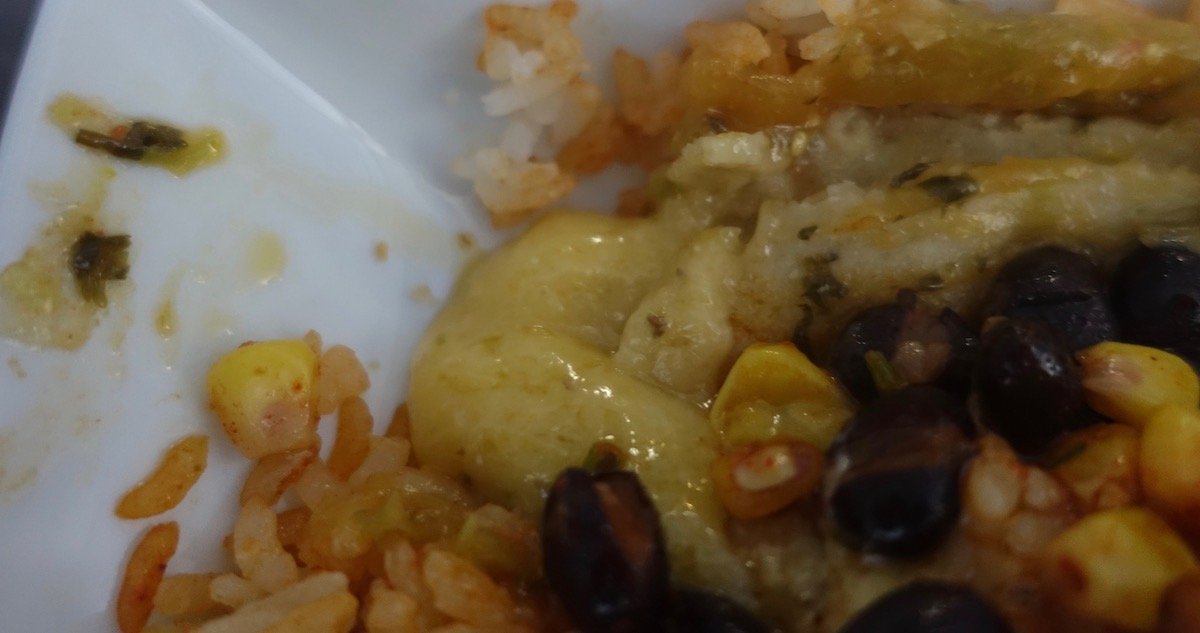 Then for dessert there was the choice of two types of cookies — chocolate chip or snickerdoodle.

Perhaps the most exciting thing about American’s new meals is that they’re different than the old ones, so they provide a bit of variety. Personally the four lunch salads sound pretty decent to me, so I wouldn’t hesitate to order those.

However, the four hot lunch options seem mostly unappealing to me.

If you’ve tried American’s new menu, what was your experience like?

Yes, do tell, what is in the Asian Vegetarian meal?

Is the Asian Vegetarian a hot meal?

I flew first class in AA from El Paso to LA last week and the food offering was a snack basket. These American airlines are a travesty.