Today American put out a press release emphasizing the ways in which they’re expanding their route network in 2018. They mention that they’re introducing 52 new nonstop flights in 2018, though most of these have already been announced. However, there are a couple of new changes being announced today.

Here’s what Vasu Raja, American’s VP of Network & Schedule Planning, had to say about the additions:

“Our 2018 schedule opens up so many new possibilities of destinations. We are making it easier and more convenient for our customers to fly on American to places that are important to them all over the world, from serving smaller cities more frequently to visiting places we’ve never flown before.”

These changes complement the expansion that American has already announced to Budapest, Hungary, Prague, Czech Republic, and Reykjavik, Iceland (which I personally consider to be most exciting). On January 22, American will add the following new routes for travel as of June 7, 2018:

Here’s a map showing all the new routes that American is adding this year: 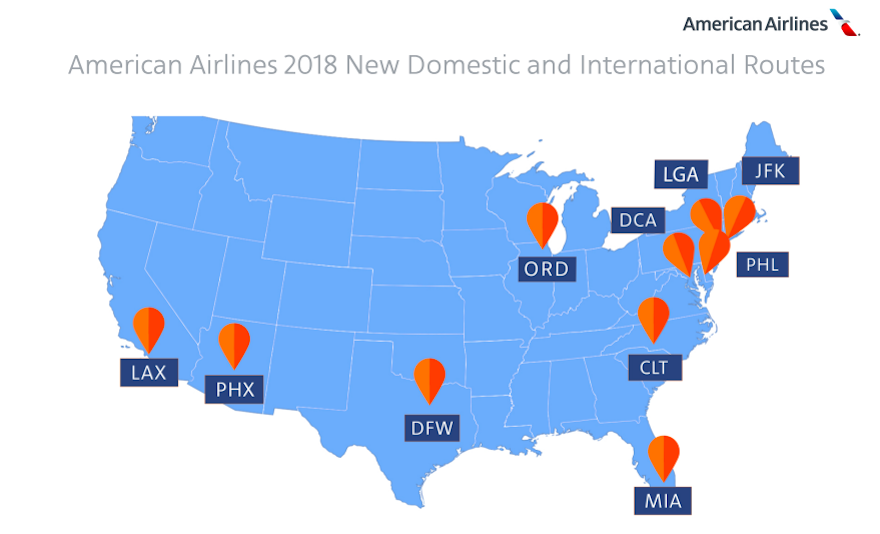 For customers there are a few benefits to the Shuttle service, the most significant of which is free beer and wine in the main cabin. On top of that, Shuttle gates are generally closer to the security checkpoint, there are dedicated check-in areas, and the cutoff for check-in is also extended. 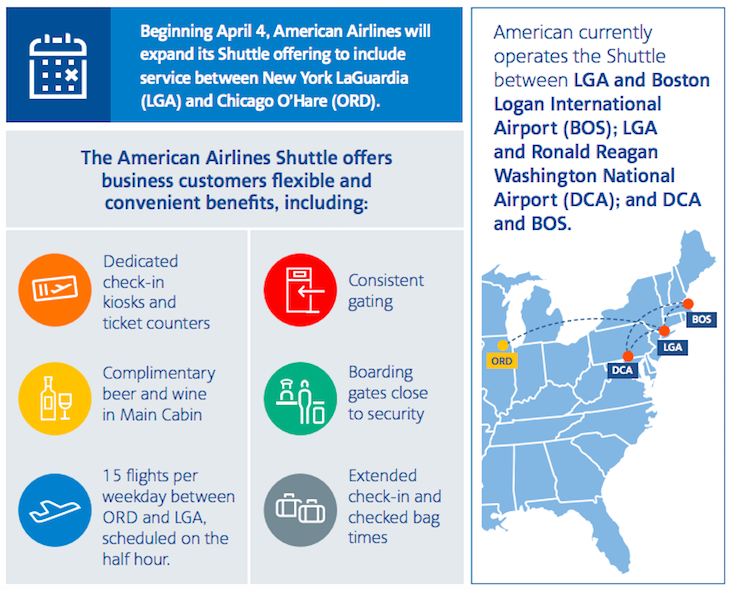 American already offers up to 15 daily frequencies between the markets, so it doesn’t look like the frequency and schedule is changing, but rather they’re just improving the experience somewhat.

Presently Delta offers Shuttle service between Chicago and New York LaGuardia (even though Chicago isn’t a hub for them), so I think American is just matching Delta here.

These changes aren’t huge. At the moment American is just announcing new routes to some smaller markets, and is expanding Shuttle service to Chicago. It’s nice to see American adding service to smaller markets, though I wouldn’t call any of the changes here radical. This is part of American’s overall growth strategy, though I don’t see anything here that’s out of the ordinary.

Anyone excited about any of these changes from American?

PHL to OKC! My most frequent flight. I'm beyond thrilled for a nonstop AA option. Nearly guaranteed an upgrade as an ex plat on this route.

This probably also means the end of meal service in Business class on the LGA-ORD shuttle :-(

"New York is a way bigger market than Philly, but there’s more competition and higher operating cost. So despite AA calling JFK a “hub,” I think they are focusing more on point to point demand (for destinations with proven demand in Europe/South America). " That has been the line being touted around by their corporate mouthpieces on A.net and elsewhere ...... which *sounds* semi believable at the first glance but then you realize for that statement to be true, they would have to classify things like .............. JFK - Tokyo / Shanghai / Tel Aviv / Amsterdam / Frankfurt as "unproven point-to-point demand".