Alaska Airlines has been deemed “90% responsible” for a 2017 incident at Portland Airport that caused a death, and the airline will now have to pay $3.19 million.

In June 2017, 75-year-old disabled amputee Bernice Kekona was connecting in Portland, using her own electric wheelchair. She was coming from Hawaii, and traveling onwards to her home in Spokane. This is where a miscommunication occurred that ultimately led to her death.

Kekona’s family says she was supposed to have an escort to her next gate, but there was some kind of miscommunication between Alaska Airlines and its contractor.

She ended up traveling through the airport unaccompanied, and fell 21 steps down an escalator in her wheelchair (you can see the security footage of the fall here — I won’t even embed it, since it will be disturbing to many). It’s stated that she got confused and thought she was getting in an elevator, rather than on an escalator.

Kekona suffered head and chest injuries, along with an infection from an Achilles tendon injury. Her remaining leg was amputated in an effort to save her, but she ended up passing away about three months later.

As you’d expect, there’s disagreement about how exactly this was able to happen:

Kekona’s family had filed a wrongful death suit against Alaska Airlines over this incident, and over three years after the incident, a verdict has been reached.

“We’re disappointed in the ruling and are evaluating next steps. There is no more important responsibility than the safety and wellbeing of our guests, whether they’re in our care or the care of a vendor.”

First and foremost, this is an incredibly tragic situation.

I’m not a lawyer, but on the surface I can appreciate how this is a complicated case — for one, you have three parties, since Alaska Airlines outsources the wheelchair escort services to a third party.

I get the family’s perspective — they asked for Kekona to have gate-to-gate help, and that wasn’t provided.

At the same time, Kekona had her own electric wheelchair, and it’s claimed that she declined help. If that was the case, they had no reason to question her on that. We see people all the time request wheelchairs to get on planes (because they want to board early), and then not use them when they get off the plane (because they don’t want to be last off).

If she wanted the wheelchair service but it wasn’t being provided, it sounds like she should have asked staff for help proactively. Her reservation didn’t reflect that she had any special needs beyond an escort, so the airline and contractors had no way to know that she may easily become confused, etc.

Of course I recognize it’s not always that straightforward. Airports are stressful places for many people, and it’s not unusual for airports to cause confusion and frustration among passengers. I understand the circumstances that could lead to something like this.

But it also raises the bigger question of what liability airlines have going forward. Again, so many people request wheelchair services but then don’t use them. In those situations, should airlines be liable for everything that happens at the airport when someone requested a wheelchair service but doesn’t use it?

In 2017, a 75-year-old woman died due to injuries resulting from a layover at Portland Airport. Her family had requested wheelchair services for her, but she ended up navigating the airport on her own. She became confused, and accidentally got on an escalator rather than an elevator.

The airline claims the woman had declined an escort, while the woman’s family claims she was left alone. Ultimately Alaska Airlines was found 90% responsible, and is now supposed to pay $3.19 million.

Elderly people can get confused, so whether she declined help is neither here nor there. The family booked gate-to-gate assistance, and that's what the lady should have received.

Did anyone question how the family knew about what happened? They were not there, yet they have all of these claims. Perhaps airlines need to have proof when people deny requests for services like wheelchairs to prevent events like this. 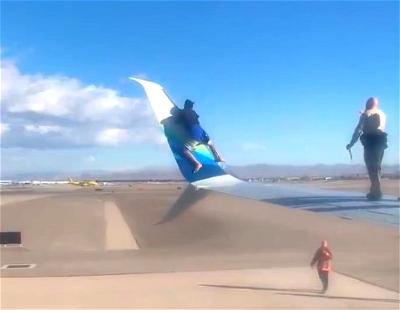