Earlier today I wrote about the Emirates 777 that crash landed in Dubai. It’s my understanding that all the passengers were evacuated safely, though I’ve heard reports that a firefighter died in the rescue efforts. That’s incredibly tragic, but when pictures of the incident came out earlier today, I assumed it could have been a lot worse. 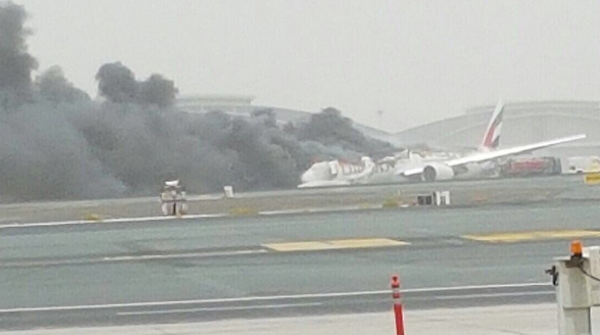 We now have footage from inside the plane as the evacuation took place, and it looks pretty terrifying:

But what stands out to me the most is the incredible selfishness and/or cluelessness of these passengers, or perhaps both. Sadly this seems to be the case every single time video emerges of such an evacuation.

As you’ll hear in every safety briefing ever, in the event of an emergency evacuation, leave all carry-on items behind. Why is this so important?

Simply put, by taking your carry-on with you in an emergency evacuation you’re selfishly putting the value of temporary access to your personal belongings ahead of others’ lives.

Now, this was a flight from India and Dubai, and I suspect many passengers didn’t know better and weren’t frequent flyers, so I’m not saying any/all passengers had the intent of risking others’ lives by taking their belongings. Furthermore, even if people had heard the safety briefing, a lot of people might not understand why they shouldn’t take their carry-on with them.

At the same time, in the video you can repeatedly hear the crew saying to leave carry-on items behind, and it largely goes ignored.

I wrote about this same topic last year after a plane had to make an emergency evacuation and passengers reacted in a similar way, and was amazed by how many commenters said they’d to the same thing, because their belongings are “important.”

So while I doubt peoples’ behavior will change anytime soon, that won’t stop me from reminding people of this. Fortunately this evacuation ended (mostly) well, though there have been plenty of deaths over the years due to slow aircraft evacuations, and I suspect there will be more in the future.

I'm sorryyyyy, my luggage are more important than anyone

I said you should write a post detailing what happens to passengers AFTER an emergency evacuation, in the hopes that people would understand that everything would be taken care of and they wouldn't be stranded if they left everything behind and just got out. I didn't see you write that follow-up, so I did. https://extraadventure.com/2016/08/24/so-you-survived-a-plane-crash-now-what/

Whilst I agree trying to look for a hand luggage in an emergency is a problem, I dont think the problem is confined to nationalities or related to frequency of travelling. Human nature. People dont understand that their lives could be gone in a matter of seconds. http://www.bbc.com/news/world-us-canada-34193767 I dont think people walking out of that flight look like Indian to me.