Sometimes airline unions call for official strikes, and sometimes we see “unofficial” strikes, where enough people will call in sick to disrupt operations. Airberlin is on its last leg, as the airline has filed for insolvency, is canceling routes, etc. It looks like airberlin will be operating “independently” (I put that in quotes because they’re really funded by German taxpayers at this point) for maybe a couple more weeks, if that.

The way things are set up, at the moment parties interested in any of airberlin’s assets have only a few more days to submit their offers, before that whole process starts. There have been rumors that Lufthansa, Thomas Cook, EasyJet, Ryanair, etc., are all been interested in airberlin assets.

Anyway, it looks like airberlin’s pilots have undertaken some sort of industrial action today, though I’m not sure what they hope to accomplish with it. Airberlin had to cancel about 100 flights today due to pilots calling in sick. Per Reuters:

About 100 flights had been canceled by late Tuesday morning after 200 Air Berlin pilots called in sick. Some short-haul flights at Lufthansa’s budget airline Eurowings were also hit because it leases 33 planes with crews from Air Berlin.

Pilots union Vereinigung Cockpit (VC) said it was surprised by the absences and that it had not called on its members at Air Berlin to call in sick.

Again, I’m not really sure what they’re hoping to accomplish with this. Airberlin will be shutting down any day, so they’re only bringing that day closer with this action. If they don’t want to work there anymore, they should just quit. Or I’m not sure if this deeper than that, and they’re trying to send a message to prospective buyers of airberlin’s assets. You’d think they’d want to be on their best behavior in hopes of having potential parties want to take over airberlin routes (including keeping crews), but who knows. What a strange and all around unfortunate situation for everyone involved.

Anyone have a theory of why airberlin pilots are calling in sick?

(Tip of the hat to @kirkmeister)

Aw crap. We made a last-minute decision to fly "any airline" from Milan back to Berlin at the end of our 3+ week trip on 9 October. (Flying Air France TXL-CDG-SFO home) the following day. Bought a couple of tx and now I can't get anyone to answer their customer "service" number or their main number. I'm reading where the German gov't is giving AB around $115M to hold them over for a few months, then I read elsewhere that they are pretty much finished and have closed their doors. We're leaving in a couple of days -- should I just write off the AB tix and find another return flight from Milan to Berlin?

Companies going under usually have low staff morale because everyone about to lose their jobs, plus there might be pay problems or other lack of money related problems. There's no incentive for anyone to be on their 'best behavior'. They don't what the future holds, there's a lot of uncertainty and the best thing they can do right now is look out for themselves and find another job. I don't blame them.

Just curious, as per German Insolvency laws do the crew get paid only after August 15th or for flights before that too? 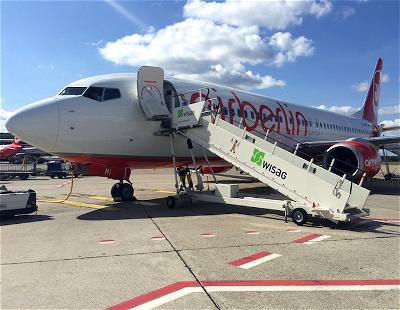