Air Tahiti Nui has just announced that they’ll be eliminating first class and instead installing new business class seats on all five of their longhaul Airbus A340 aircraft.

Despite the fact that it’s 2013 they’ll be installing angled flat seats, which is pretty disappointing. Then again they’re in the unique position of having very little competition, so I can’t really blame them.

The real good news in this announcement is actually that the elimination of first class and new seats will result in an extra eight business class seats, meaning there will now be 32 business class seats. Hopefully this results into a bit more business class award space. I don’t think this is a market where demand varies greatly based on the quality of product, given that Air Tahiti Nui only really competes with Air France on the Los Angeles to Tahiti route, and Air France really can’t compete on frequency.

Interestingly they won’t be offering any in-flight entertainment to passengers booked on one-way flights:

The highlight of the new cabin is the new Inflight Entertainment System featuring an “on demand” access to a selection of 25 movies and 24 television programs, as well as magazines, games and music on every roundtrip journey. 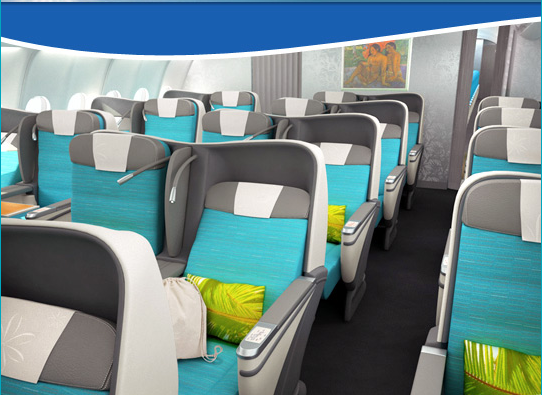 [...] in February I wrote about Air Tahiti Nui’s cabin refresh project, whereby they were removing first class and installing a new business class [...]

we flew back from ppt to lax and coach was surprisingly good. I would not pay the extra miles or $$ for business. Biz is just not that much better and can't even go flat.

Air Tahitit Nui, even better than an LOT 767. :D Not to mention, even though one way ticktes cost 75% of R/T tickets, the IFE is not included. Pay more, get less, that's ATN !