Many airlines have rewards programs for businesses. These programs allow you to double dip, as you can accrue points in your personal frequent flyer account, and also in the business account (though you earn points in the business account at a slower rate). For example, on the blog we’ve extensively covered American’s Business Extra program, which I’m a member of and love.

Delta has a similar business program called SkyBonus, and the way the former employee of a company used it has landed her in jail. NH1 has the story of a 36 year old New Hampshire woman who worked for Brookstone until 2013, when she was fired.

She used to be an executive assistant for the company in charge of administrating many functions, including controlling miles. After she was fired she used over 2,000,000 SkyBonus points to travel around the world, including to France, Italy, and Greece. The company only found out years later after launching an investigation. Now the woman has been arrested, and she will appear in court on December 7.

Here’s the SkyBonus rewards chart, just to give you a sense of some of the redemption rates: 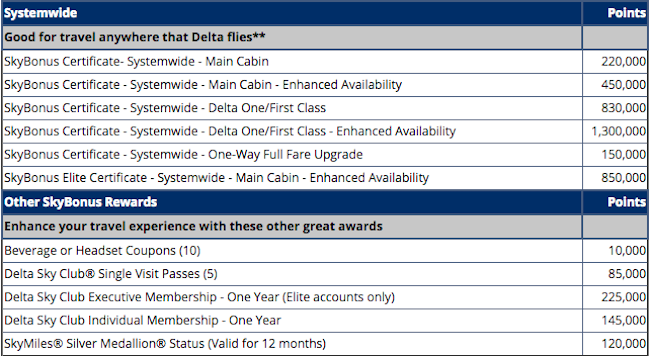 One could certainly argue that there are better uses of SkyBonus points, like a Delta One roundtrip ticket to anywhere Delta flies for 830,000 points. However, I don’t think that could realistically be valued at more than a couple of thousand dollars, given the capacity constraints. The way I see it, no matter how you slice it, 2,000,000 points aren’t worth more than $10,000, which is a far cry from $300,000.

So while she may be guilty, I think investigators need to work on their cent per mile math, or otherwise teach me the best ways to use SkyBonus points, because I must be missing something. 😉

Perhaps they mean 20 million points, or 200 million points, or something, as that’s the only way the value would start to get that high. For what it’s worth, companies enrolled in SkyBonus earn anywhere between one and 30 points per dollar spent, depending on the fare class, the city they’re flying out of, etc.

(Tip of the hat to @MattSoleyn)

@AlohaDaveKennedy , agree! better call Saul! i think most ffp claims points do not have value. and belong to the ffp company. i.e. from ihg T&C section 12 https://www.ihg.com/content/us/en/customer-care/member-tc#points Points have no value. IHG® Rewards Club points are not redeemable for cash or any other form of credit and have no value until presented for redemption in accordance with the terms and conditions of this Programme. Points have no fixed or ascertainable cash value. Members have no ownership interest in accrued points and accrued points do not constitute property of the members. Use of the word earn in marketing materials in relation to IHG® Rewards Club points shall mean collect and shall not infer that the points have any value until they are presented for redemption. Points may not be purchased or sold and are not transferable except as otherwise stated herein.

Gunter hit the nail on the head IMHO. The IRS would love to be able to tax travel and hotel points. So far, the airlines and hotels have demurred, saying that points are gratuities they extend to their best customers, with no ownership value. As soon as a court sets a value, the next step will be taxation of travel hackers.

The scary part about this is that if found guilty in this as in the case of Senator Menendez, points now will have been proven to have a value in court, meaning that the government may try to tax them...