Spirit Airlines has just become the first major US airline to start hiring pilots & flight attendants once again since the start of the pandemic.

As reported by CNBC, ultra low cost carrier Spirit Airlines is once again hiring for several roles, including pilots and flight attendants:

If you go to Spirit Airlines’ careers page you’ll see all of the available positions, including for first officers and flight attendants, primarily for the Fort Lauderdale base.

Spirit Airlines hopes to see demand recover significantly over summer. The airline can only train so many pilots and flight attendants at once, which is why hiring is starting now. This way training can happen in phases.

Spirit Airlines avoided involuntary furloughs of unionized employees during the pandemic, through a combination of reduced hours, voluntary leaves of absence, and voluntary early retirements.

In addition to hiring new employees, the airline is also calling back some of the workers who had taken leaves of absence.

How exactly is Spirit Airlines in a position to hire, while at some other airlines only those with 20+ years of seniority are flying?

Well, Spirit Airlines has a much more optimistic outlook than other airlines, and perhaps for good reason. As we start to see demand recover, generally it’s leisure travel that’s going to recover first, and in particular domestic leisure travel. Spirit Airlines is very well positioned for that, given that the airline doesn’t rely on business travel.

And who knows, perhaps the airline isn’t too far off. People are no doubt excited to travel as we start to see widespread vaccines, though realistically I think the biggest leisure recovery will be more towards late summer rather than early summer.

Spirit Airlines is becoming the first major US airline to start hiring pilots and flight attendants since the start of the pandemic. This is in addition to calling back many workers who had taken leaves of absence.

This is an exciting development that points at things moving in the right direction in the industry. Spirit will likely have a faster recovery than the legacy airlines that rely on business travel and long haul international networks.

Perhaps the airline is still being a bit optimistic in planning on 2019 capacity by early summer. Sure, maybe the airline can offer that kind of capacity, but I’d argue it’s highly unlikely it can do so in a profitable way.

What do you make of Spirit’s optimistic outlook and hiring?

@Jackson - more true for Spirit than Frontier. You can get a domestic first class seat for $40 on Spirit (none of the extras, but I'm content with just the hard product, honestly). It's not a bad deal.

@David Knock it off. Plenty of Spirit customers are black people. Look up YouTube videos. It isn't just white people.

I'm more surprised Spirit doesn't have any job postings for airport and in-flight bouncers... Or just add advanced combat skills to their FA training course. It's clearly needed at NK. 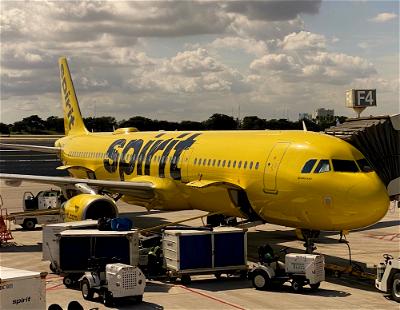 26
Is It Cheaper To Buy Spirit Tickets At The Airport?